With 50 days to go until the start of the Commonwealth Games, Team Scotland, Team Wales and Team NI have all announced their judo teams that will compete at Birmingham 2022.

Gold medallists at Glasgow 2014, Sarah Adlington and Chris Sherrington lead an exciting line-up of 11 Team Scotland judoka with the remaining nine judoka all making their debuts as the sport returns to the Games programme, having not been included at Gold Coast 2018.

Adlington said “It’s a great honor to be selected to represent Scotland at any event but even more so at a Commonwealth Games, I am really excited to compete! It is also another opportunity for the public to see some world class judo. I know there will be a lot of Scottish support in the crowd and this will be great for all the Scottish athletes.”

Team Wales also have a returning Commonwealth champion in Natalie Powell who is joined by 5 debutants. Gregg Vareyat the age of 33 makes his Commonwealth Games debut having narrowly missed out in 2014. For Varey this will be final year competing as he retires following the Commonwealth Games having recently taken on a coaching role at Team Bath. 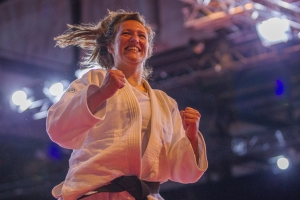 Welsh Judo CEO, Darren Warner, commented, “Congratulations to everyone who has been selected by Team Wales for the upcoming Commonwealth Games in Birmingham. We are delighted to see six athletes have been selected! The Commonwealth Games is a very special tournament for us, as it is the highest level that you can represent Wales’ in judo. Best of luck everyone. Your country is behind you, lets give them something to cheer about!”

Team Northern Ireland have a returning Glasgow 2014 competitor in Eoin Fleming, Fleming narrowly missed out on a bronze medal in Glasgow as he was defeated by South Africa’s Jacques van Zyl in the bronze medal contest.

Fleming is joined by 6 debutants including Nathon Burns, Joshua Green and Rachael Hawkes who were all recently in action at the European Championships in Sofia.

“Now it’s just about focusing towards the summer,” Northern Ireland Judo performance lead Ciaran Ward said at the end of a qualification period made longer than planned by the coronavirus pandemic.

“We deliberately set the qualification performance standard that would be consistent with previous top-eight performances at Commonwealth Games,” Ward added.

“On the day if they give their best performance they should be sitting somewhere about there.”

Team England are due to announce their judo team on Friday 24th June whilst the Judo competition will take place at Coventry Arena between the 1st and 3rd of August.

Get your hands on this summer’s must-have ticket at www.birmingham2022.com/tickets