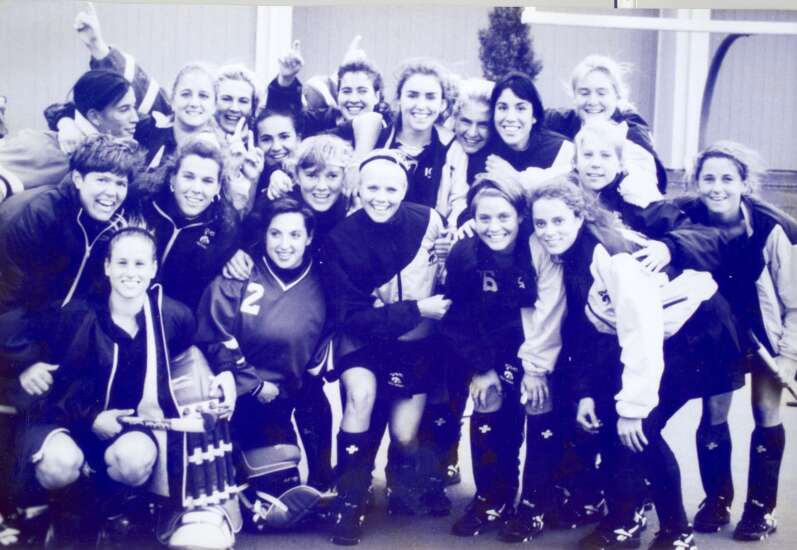 Iowa’s 1999 field hockey team was the seventh under then-head coach Beth Beglin to go to the Final Four. Beglin retired from coaching after the season. (Submitted photo)

Editor’s note: This is 42nd in a series counting down the Top 50 moments in Iowa Hawkeyes women’s athletics history in the 50 days leading up to the 50th anniversary of Title IX in June.

Most notably, she and one of her assistant coaches missed the first month of the season because of the 1988 Summer Olympics. Then came a couple-week adjustment as Beglin returned.

“I knew it was going to be a difficult transition,” Beglin recalled.

But after the team “peaked at the right time,” Iowa found itself one win away from a Final Four, with Northwestern acting as that last obstacle at Kinnick Stadium.

All that refusing amid challenging circumstances sent Iowa to the Final Four in 1988.

Then Iowa repeated the feat again, and again and again during Beglin’s tenure. By 1999, the Hawkeyes went to seven Final Fours in a 12-season span.

Each run had its own challenges. In 1999, Iowa had 11 freshmen. In 1990, Iowa had to beat a Northwestern team on the road that shut out the Hawkeyes a month earlier.

The 1994 Final Four was particularly memorable.

After winning the Big Ten tournament in a penalty shootout and edging California in the first round of the NCAA tournament, Iowa beat Old Dominion — the same school that beat Iowa twice in the national championship — 3-2, to go to the Final Four.

“We had never beaten Old Dominion on their home field,” Beglin said. “I just told the team to play free. Nobody expected us to win this game, except for everybody that was in the locker room.”

Along with the seven Final Four trips and two national runner-up finishes, Iowa at one point had a 35-game home winning streak.

“We had great, great fan support,” Beglin said. “Our fans were loud, and they were vocal.”

One of the teams Beglin is most proud of was one of the five that didn’t reach the Final Four.

With several key players essentially taking redshirt years because of their commitments for the 1992 Olympic team, Iowa had an inexperienced group in 1991.

“If you take a team and you take off the starting goalkeeper and 90 percent or your scoring off a team, that team is going to be hard-pressed to succeed,” Beglin said.

But the Hawkeyes went 10-0 in Big Ten play and fell, 2-1, one game short of a Final Four. The next year? Iowa was the national runner-up to Old Dominion.

The 1994 Iowa field hockey team poses for a photo. The goalkeeper on that team Lisa Cellucci (2) now is the Hawkeyes’ head coach. (Submitted photo)