Contemporary dance companies are about the new and now, which means they are far less likely to repeat repertoire than classical companies do with all their Nutcrackers and Swan Lakes, But with a work as powerful as Rafael Bonachela’s ab [intra] (“from within”), why not? Take into consideration practical reasons to do with COVID-19 interruptions – creating quality work takes time – and the fact that ab [intra] was recently taken to France for Sydney Dance Company’s first international tour in three years and the programming makes sense.

As the curtain fell on ab [intra]‘s opening performance, which the audience greeted with a prolonged and noisy standing ovation, someone behind me observed they hadn’t remembered the work looking quite like this. It was probably because most of the dancers were new to it, her friend replied, and she’s right. Rafael Bonachela made ab [intra] in 2018 in association with the dancers he had before him and as he notes in the program for the current performances, the work “is derived from the group dynamic of the dancers and what they give in the studio and on the stage, collectively and as individuals”.

That’s not to say ab [intra] has been greatly changed in form or function from 2018 but that there are different moods and vibrations. This is inescapable. The piece has not the slightest speck of narrative or intimations of character into which SDC’s 17 women and men can disappear. It’s about the bodies of these specific dancers and the energy they receive and emit. It’s their world.

Quite a private one too. Not for nothing are there repeated motifs of a dancer standing still at the front of the stage with his or her back to the audience, of scarcely visible bodies at the back of the stage and others lying prone or huddled on the floor. Damien Cooper’s magnificent lighting enforces the separation between us and them. The closer dancers get to the front of the stage the more they are seen in silhouette and time and again the severe, bright clarity of David Fleischer’s white-wall set and the dancers within it are veiled in diffused, hazy cloaks of restrained colour.

And isn’t it always the way? The more mysterious something is the more we want to find out. By holding secrets tightly to its chest ab [intra] invites intense concentration.

Nowhere is the concentration more richly paid than in a series of duos studded through the work. The first and second are long, lush, complex and equally virtuosic. In the first, Jacopo Grabar and Emily Seymour could be Adam and Eve after the fall, enjoying the pleasures of the flesh but not without a strong streak of antagonism. Their skin-coloured, skin-tight attire (designed by Fleischer) accentuates their contours as they negotiate movement by turns erotic, acrobatic, violent and sculptural. The second duo, with Chloe Leong and Davide Di Giovanni in black, is more reflective, more tender and extremely beautiful. Several shorter duos later introduce other aspects of relationships before the couples go their separate ways. The Di Giovanni-Leong pas de deux also ends with the two parting but briefly returns near the end with the reiteration of one of its most affecting passages. For much of its time ab [intra] feels emotionally enigmatic; not here. 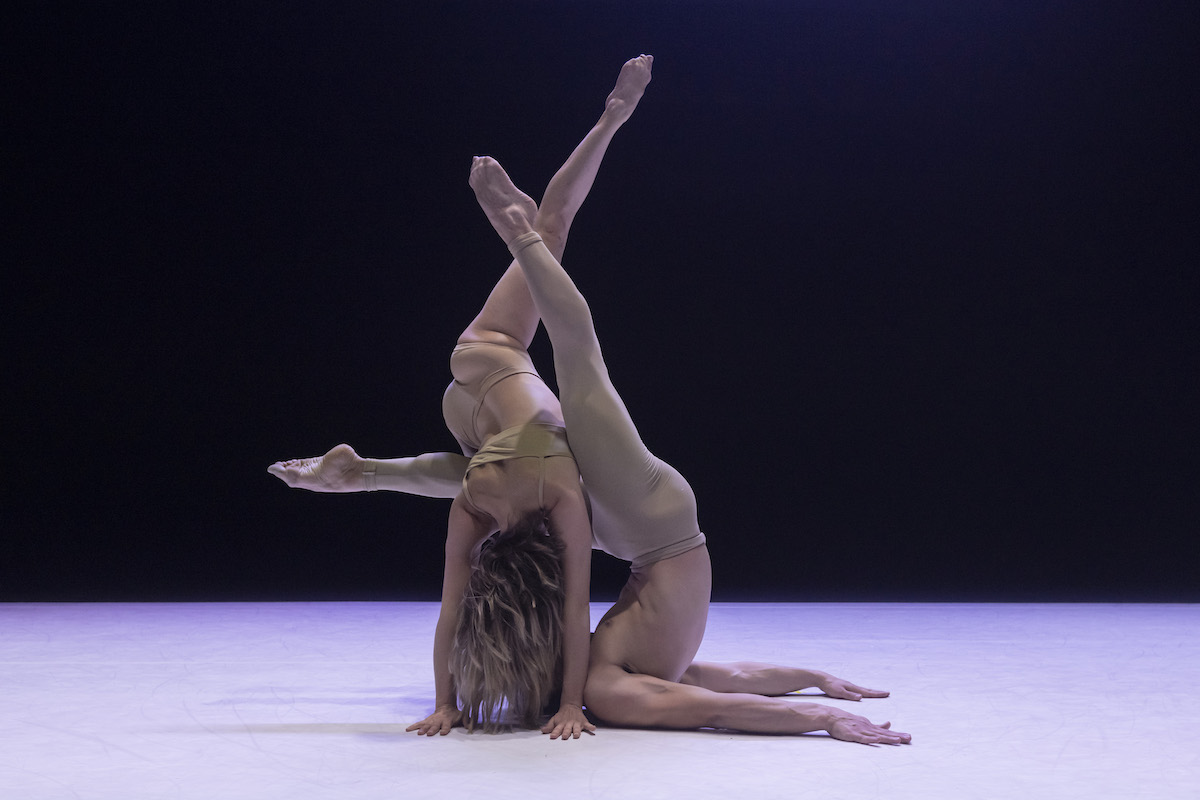 In 2018 the first duo was danced by Janessa Dufty and Izzac Carroll with a more mystical quality and in the second, Di Giovanni’s partner was Charmene Yap, who in memory looked smaller and therefore more vulnerable than Leong, who was entrancing in her own way. Dance is always remade by different performers. It was more noticeable this time around, for instance, how ab [intra] Seamlessly incorporates classical shapes into a contemporary sensitivity. Rhys Kosakowski, who has been with SDC since 2020, was previously with Houston Ballet and stood out in ab [intra] with his immaculate turns from the ballet book.

But everywhere you look in this piece there is something and someone interested. Dancers race across the stage to stop with an extravagant slide, two groups of five seem to oppose one another for reasons unknown, trios form and dissolve, large contingents move in and out of unison apparently at will. As the full company lines up at the back of the darkened stage, Dean Elliott has a memorable solo that speaks of internal tumult and right at the end Jesse Scales echoes that stage picture but dances with optimistic freedom.

Underscoring all this and much more is Nick Wales’ music. It marries electronica with strings, piano and percussion in a thrilling, immersive sound world that foregrounds movements from Latvian composer Pēteris Vasks’s Concerto No 2 for cello and string orchestra. The rich, human voice of the cello is an inspired addition to ab [intra]‘s fascinating, elusive world.