(ESPN Cricinfo) – Shamarh Brooks scored 79 and shared a 75-run partnership with Captain Nicholas Pooran which guided the West Indies to a five-wicket win over top-ranked New Zealand yesterday in the series-opening ODI in Barbados.

Brooks reached his fourth ODI half century from 58 balls and had faced 91 deliveries when he was out in the 34th over with the West Indies closing on New Zealand’s inadequate total of 190.

Jason Holder and Jermaine Blackwood were at the crease when the home team reached its target with 11 overs to spare.

Earlier, Akeal Hosein took 3 for 28 and Alzarri Joseph returned 3 for 36 as West Indies bowled out New Zealand in 45.2 overs after choosing to field. It was the first time New Zealand has been dismissed in an ODI since March 2020.

“Watching the Kiwis bat I realized it was a bit tough going early for them,” Brooks said in a television interview. “I guess credit must go to our bowlers for reducing them to a score of 190. I was just focused on going out there, getting some partnerships and getting that total off.”

Rain breaks punctuated the West Indies innings but couldn’t disturb the steady momentum set by Brooks. The first came in the opening over of the innings and the second in the 29th when West Indies were only 42 runs from victory. At that point they were well ahead of a winning total under the DLS system.

Pooran was out for 28 immediately after the second rain break but Brooks retained a strong guiding hand on the run chase.

Hosein, Joseph and debuting spinners Kevin Sinclair and Yannic Cariah turned the tide of the New Zealand innings with accurate bowling in the middle overs on a pitch which rewarded spinners with bounce.

New Zealand made a solid start with a 41-run partnership between Martin Guptill and Finn Allen, who struck two sixes and a four from Holder’s bowling in the seventh over. A short rain break followed at the end of the eighth over and Allen was out for 25 four balls after the resumption. From then on New Zealand lost wickets regularly and struggled to build the partnerships that were necessary to reach a more challenging total.

Allen was Hosein’s first wicket, caught by Pooran who had to run back and hold onto the ball as it came across his shoulder. Guptill fell in Hosein’s next over, caught by Kyle Mayers at slip for 24 when New Zealand were 53 for 2.

Captain Kane Williamson attempted to lead a recovery with an innings of 34 from 50 balls. But he lacked support with Devon Conway and Tom Latham out cheaply as New Zealand slumped to 88 for 4.

Williamson’s partnership with Daryl Mitchell held promise and the pair had added 28 for the fifth wicket before both were out to Joseph in the 30th over. Mitchell had made 20 from 32 balls when he was trapped lbw and Williamson followed when he edged behind.

Allrounders Michael Bracewell and Mitchell Santner added 40 for the seventh wicket but weren’t able to tip the match back in New Zealand’s favour. Bracewell was trapped lbw to give Cariah for his first international wicket as the Trinidadian wristspinner finished with 1 for 49 from nine overs.

The New Zealand lower order often comes to the rescue of the team but on this occasion there was no fightback. Santner was out for 25 with the total 189 for 8 and the last two wickets fell quickly.

“Obviously it was challenging out there to get some rhythm and some momentum,” Williamson said. “Credit to the way the West Indies bowled. They got a lot out of that surface and executed their plans well and ultimately played a very good game of cricket.”

The second game will be played tomorrow at the same venue. 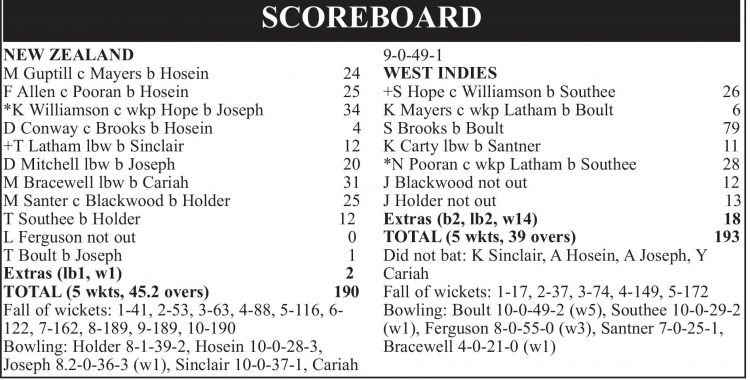