Mention “road rally” to most people, and visions of race cars running a multi-day gauntlet of endurance and skill tests across inhospitable terrain are what immediately come to mind. So too, the wind-beaten, dirt-infused faces of competitors offering only 1,000-yard stars by the final stages of contests with names like Mille Miglia, Carrera Panamericana and Dakar. Yet a growing number of rallies have shifted from the high-risk, high-reward concept to focus solely on the latter, driven purely by joie de vivre, Case in point is the 2022 Robb Report California Coastal, which crossed the finish line yesterday.

From June 12 through 16, over 20 participants teamed up as pilots and navigators in an automotive field represented by the likes of Ferrari, McLaren, Porsche and Bentley, to explore what’s arguably the Golden State’s greatest motoring pilgrimage—the route from Santa Barbara to Napa . Connecting the nation’s two preeminent wine regions is Highway 1, a paved ribbon etched along steep cliffs that jut from a chameleon-like sea.

A portion of the diverse automotive field prepped for action.

For Los Angeles–based entrant Nancy Gale, behind the wheel of a Mercedes-AMG GT, “the roads never get old no matter how many times you’re on them, around every corner is something breathtaking.” Equally smitten was her copilot Michael Zander, who called the remote sections “magical.” Conjuring up the 514-mile course were the drive specialists at Radius, including co-founders Don Harple and Laszlo Nagy with nearly a half-century in motorsport and related consulting and support services between them. “First and foremost, we look for visually pleasing routes paired with roads that promote driving enthusiasm,” says Harple, who adds that the greatest challenge is keeping everyone on the same flow. “It’s much more enjoyable to spend time on the road together as much as possible,” he says, “that’s where the stories and camaraderie are built as a group.” 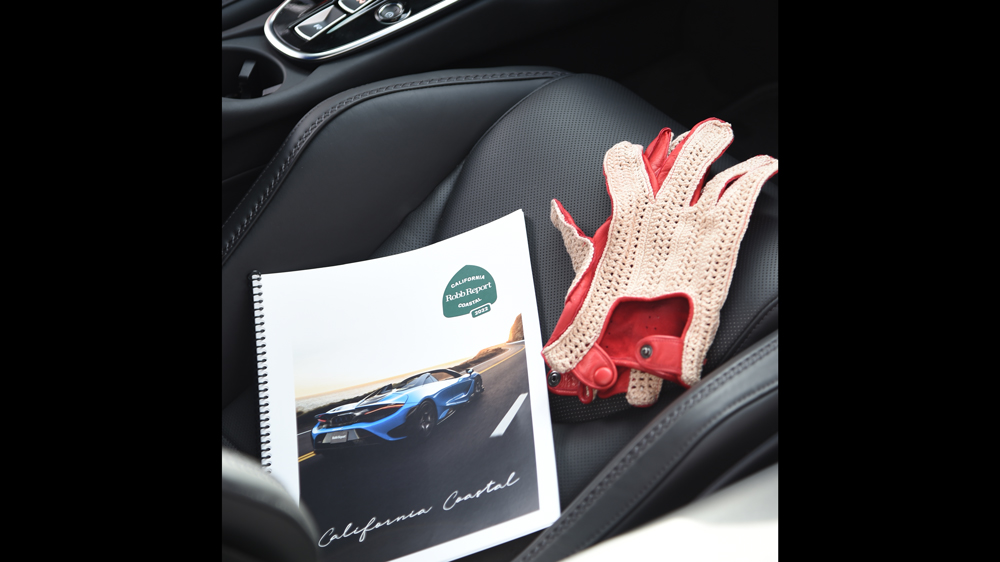 Almost ready to roll out.

On Sunday, a concours-style display of participating machines and an opening night cocktail reception were followed by a paired dinner featuring estate wines from Cuvaison. The kickoff to Robb Report‘s second annual rally was hosted at the Ritz-Carlton Bacara, Santa Barbara—basecamp for the first night. 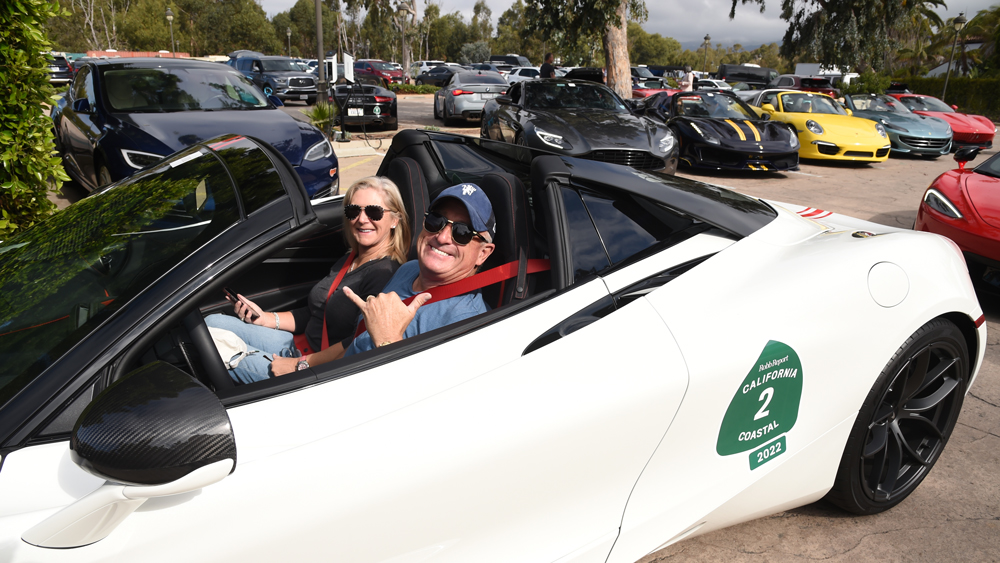 Neil and Bridie Hudspith set off from the Ritz-Carlton Bacara, Santa Barbara in their McLaren 720S Spider.

A 9 am start the next morning began a supercar convoy bound for San Luis Obispo to discover a presentation of truly unbridled power and performance, one that only the Return to Freedom Wild Horse Sanctuary could provide. The preserve, set on over 2,000 acres of pristine backcountry, is home to 400 untamed equine residents.

“As a child, my first word was horse, so you can imagine the impact of seeing wild horses being chased and captured on television as a five-year-old,” says Neda DeMayo, founder and president of Return to Freedom. “Decades later, when it was exposed that thousands were being slipped into the slaughter pipeline, I started this solutions-focused conservation organization to protect the diversity and habitat of America’s wild mustangs and burros.” 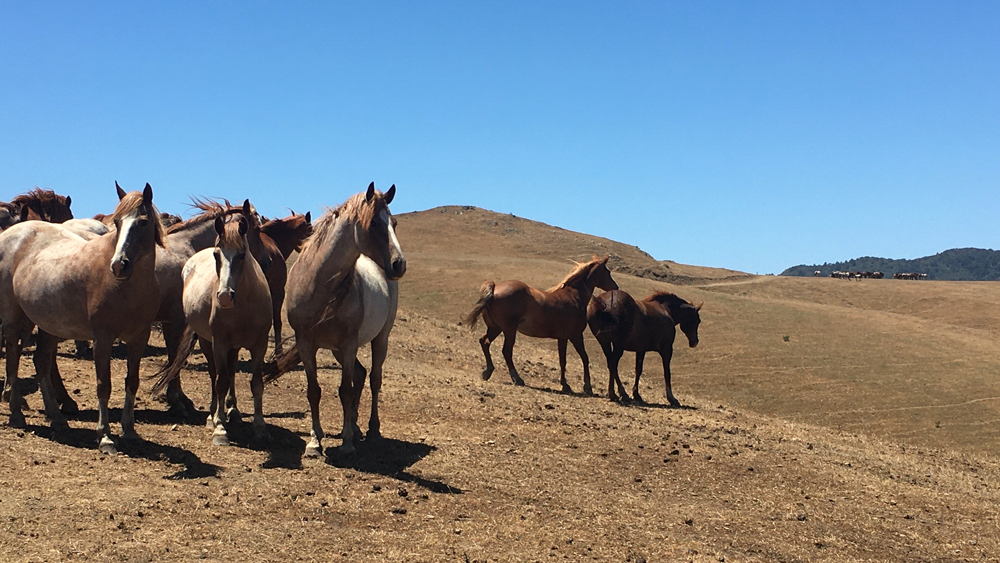 The unbridled power of the American wild mustang on full display at the Return to Freedom preserve.

Taking off-road vehicles up an amber ridge, guests were soon walking amidst various herds of roaming mustangs that were relocated from several western states. Safe from the threat of inhumane captivity or elimination, the horses are even reunited with their original family groups when possible. It was an experience that resonated with rally participants Mike and Mickala Sisk, who are in the process of rescuing rhinos from various countries where poaching has decimated their numbers. The plan is to breed the endangered species on their ranch in Texas before eventually bringing them to Africa. Referring to the team at Return to Freedom, Mike could relate to the “incredible passion of the people involved.”

Perhaps the road trip’s greatest juxtaposition was presented later that afternoon. As the rally traced the serpentine stretch to Big Sur and beyond, the rugged hills from earlier—speckled by oaks and jagged rock—gave way to the immaculately manicured fairways of Pebble Beach. Before bedding down for the night at the famed Inn at Spanish Bay, the group was further immersed in the resort’s refined Scottish take on golf as a bagpiper slowly strode from the dunes to the fire pits, the haunting serenade bidding a temporary farewell to the sun . 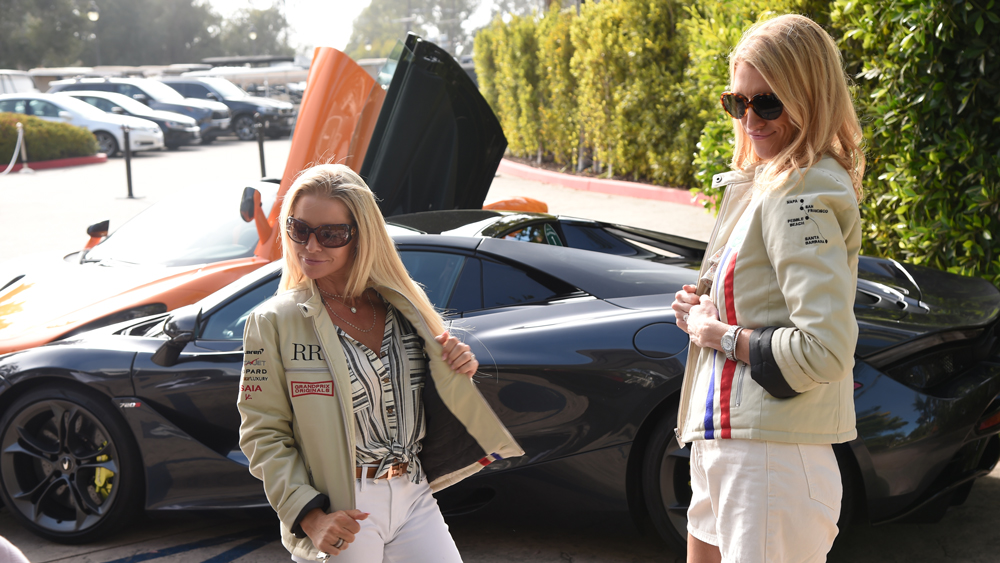 “Iconic” seemed the theme for the second drive day, as the assemblage of rolling art meandered through one of the most coveted neighborhoods in the country, known simply as 17-Mile Drive. After a group photo in front of the revered 250-year-old Lone Cypress (inspiration for the logo of Pebble Beach Resorts), it was a direct jaunt to WeatherTech Raceway Laguna Seca (opening image), a motorsport mainstay since 1957.

Having dined with the rally crew the previous evening, track president John Narigi made the executive decision to bump up the parade-lap speed limit, allowing the procession to enjoy slightly more spirited driving for a couple of passes around the 2.23-mile circuit and its 180 feet of elevation change, including the infamous “corkscrew” sequence of steeply descending twists.

“It’s always a delight to see how people react when they drive the racetrack for the first time, knowing they are driving where legends have,” says Barry Toepke, director of Heritage Events at Laguna Seca. “While the track and Laguna Seca Recreation Area have changed over the years, there’s still the same spirit as when they first opened.” 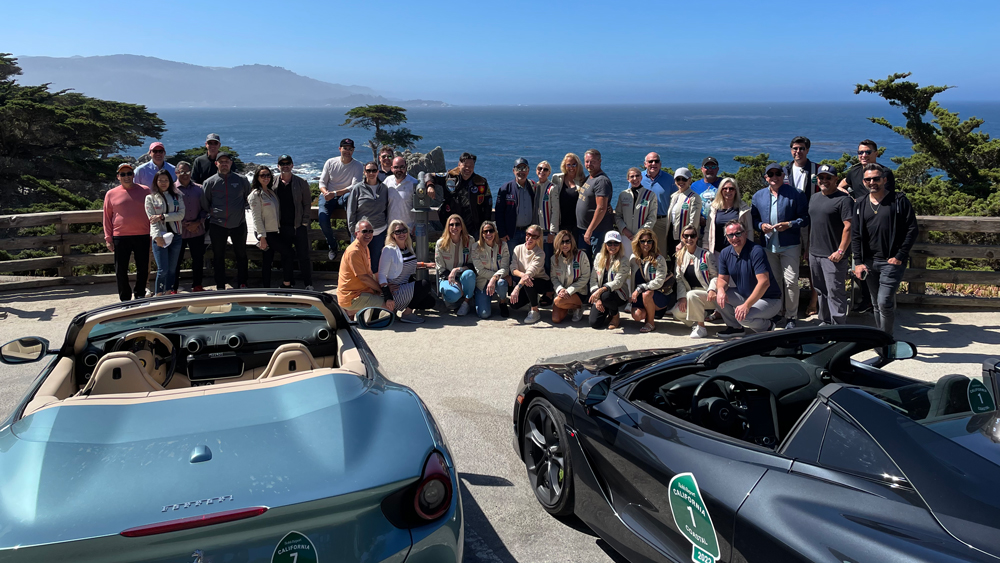 No tour of 17-Mile Drive is complete without a photo at the Lone overlooking Cypress.

The time spent there may have proved costly for Mike Sisk. “I knew this was the day to judge the Ferrari Roma, and it handled everything beautifully” he says, having rented the Prancing Horse specifically for the rally before making a decision to purchase it. He did just that the next day with the help of fellow rally entrant Michael Famiglietti of Penske Automotive Group.

Other event sponsors on hand were Chopard, Cohiba, VistaJet, McLaren and Italian fashion house Isaia, the latter providing a reception of canapés and libations at its Frank Lloyd Wright–designed boutique in downtown San Francisco. There, Pixar’s creative director Jay Ward, a new addition to Robb Report’s RR1 membership club, joined former mayor Willie Brown in the exclusive mixer before attendees embarked on the short walk back to the baronial Ritz-Carlton, San Francisco. 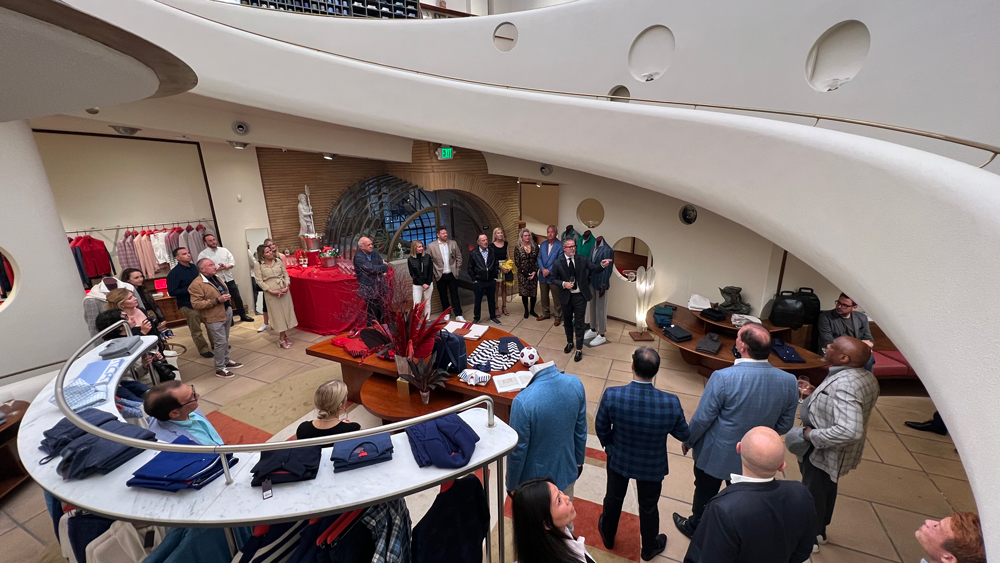 The most spectacular motoring was reserved for the final legs on Wednesday, where the caravan ascended to Hawk Hill for a unique bird’s-eye perspective on the city, then ventured along the often overlooked but unforgettable byways leading to Point Reyes and Tomales Bay. The 112-mile section culminated at the final destination, the Carneros Resort & Spa in Napa, where a McLaren rep was there to showcase the marque’s new 671 hp Artura hybrid coupe.

After the closing al fresco dinner, Chopard’s Mathieu Meunier sat by the fire and sipped a glass of Quantum Bin 98, a blend of Cabernet Sauvignon from Napa and Shiraz from South Australia crafted by Penfolds, the wine partner du jour. Asked how this rally differed from numerous others he has been involved with, Meunier took a beat to respond. “At many of the classic rally, participants are only interested in the cars,” he eventually stated. This group is more balanced, it cares about the finer things in general.” 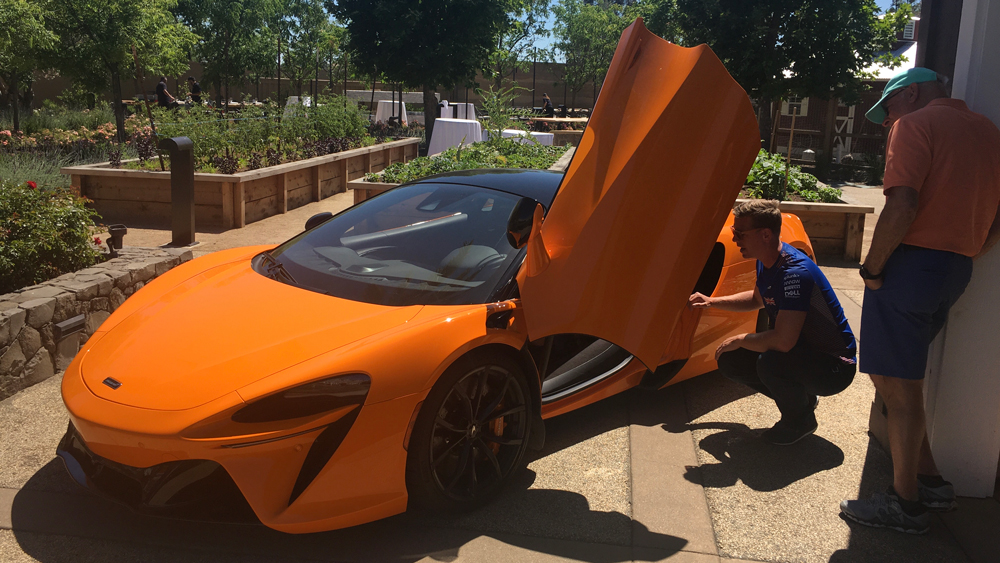 The McLaren Artura gets a moment to shine at the Carneros Resort and Spa.

In an unexpected show of appreciation, Meunier had just gifted one of Chopard’s limited-edition Mille Miglia timepieces to club member Neil Hudspith. “I have received awards over the years for the companies I represented, but this was the first time I had a microphone in my hand and was at a loss for words,” said Hudspith after the surprise.

At the goodbye brunch on Thursday, the Hudspiths sit with Nancy Gale and Michael Vander. Despite having just met a few days prior, the couples appear to be close friends and already have plans to visit each other. “You may forget some of the roads, but the people you’ll remember,” says Vander. When asked what message they have for newbies who may consider joining next year’s edition, Hudspith responds faster than his McLaren 720S: “Don’t think about it, just get it on the calendar.”