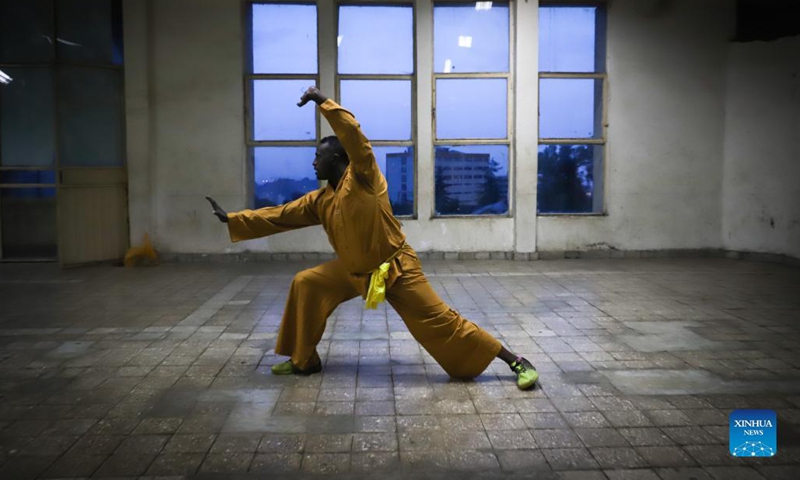 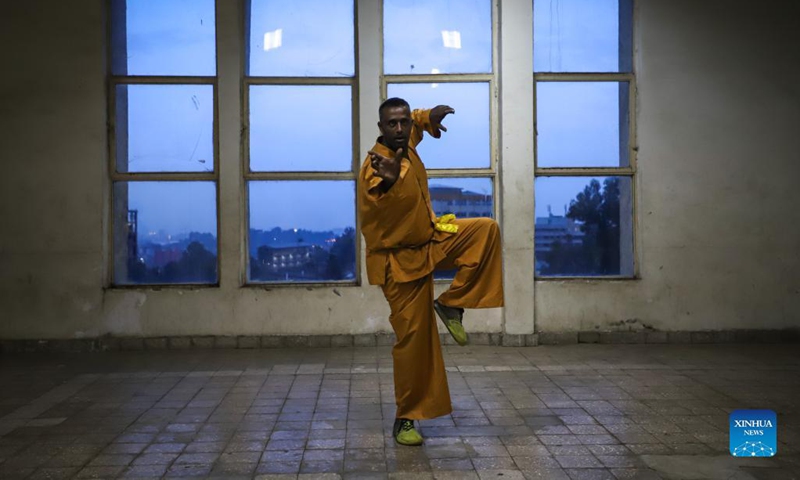 In a sports center located at the heart of the Ethiopian capital Addis Ababa, a burst of shouts come out from trainees practicing Chinese martial arts.

The trainees, aged from 7 to 65 years, practice the Chinese martial arts, Kung Fu and kickboxing at the Dave Dan Wushu and Kickboxing Training Center.

“Martial arts are not to harm other people but to teach respect, humanity, sincerity, self-defense, and search for inner peace,” said master Dawit Terefe who works as a coach in the training center.

“Impressed by unbelievable fighting techniques of the popular Chinese film actors such as Bruce Lee and Jackie Chan, I started learning Chinese martial arts at the age of 12 in 1993,” said Terefe in a recent interview with Xinhua.

In Ethiopia, children aged from 7 to 16 years have a real passion for martial arts while adults prefer kickboxing.

Terefe stressed that the Chinese martial arts are lifetime physical exercises and are performed with balanced movements between legs and hands, making them preferable to other exercises.

Terefe’s career as a Chinese martial arts instructor began 20 years ago but he became more popular after returning from Henan province of China where he attended nearly four months of intensive martial arts training.

“I was one of the four Ethiopians who were awarded a scholarship by Ethiopia’s Culture and Sports Minister in 2013 and acquired a rank of Master in Chinese martial arts from the Shaolin temple in China,” Terefe said.

“I first learned Shaolin Wushu, and then started learning other forms of martial arts with special emphasis on Sanda or Kickboxing,” the master recalled.

After he returned home, Terefe has participated in 25 martial arts competitions, the majority of which were in Chinese kickboxing and he managed to win all of them.

Representing his country, Terefe also participated in the Afro-Asian martial arts competitions held in Egypt and won a bronze medal in kickboxing, the first medal the Horn of Africa nation earned in a martial arts contest.

According to a recent report by the Ethiopian Martial Arts Federation, there are over 800 martial arts training centers across Ethiopia, Africa’s second-most populous nation.

Among them, 60 are found in Addis Ababa and each appears to offer martial arts training for about 70 students in each season and at least a Wushu club exists in every small town of Ethiopia, the report indicated.

Haleluya Dawit, 16, is one of the over 70 students of master Dawit, striving to acquire higher martial arts belts, standards that are given for students to encourage them for the next level of training.

“I enjoy learning Wushu because it combines different techniques and gives me enlightenment,” said Dawit, who was practicing Chinese martial arts and a range of physical activities including splits, upward bow pose, high knees, horse stance and kicking along with her fellow classmates .

“Since I began attending the martial arts training, I have built up my confidence and defensive capability,” said Dawit, as she aspires to become a world champion in martial arts competitions.

“After I started attending the martial arts classes, I have enjoyed better strength, speed, power and flexibility,” said Belete.

Terefe stressed that the Chinese martial arts are winning the hearts and souls of the Ethiopian youth and have become popular over time.

The government needs to consider sending more numbers of Ethiopian students to China to follow martial arts training to further promote the martial arts at the national level, the Chinese trained master said.

Achieving his long-time dream of becoming a martial artist, Terefe has participated in nine locally produced action films including as a lead actor.

Prior to his return, Terefe played an actor in one of the action films produced in China. He also performed a role in locally produced romance and documentary films as well as TV drama series.

“The Chinese martial arts is a philosophy through which one can understand the world,” Terefe added.