In the early 2000s, American automakers didn’t offer an affordable sporty compact to compete with successful imports such as the Mazda Miata, Acura Integra, Honda S2000, and Civic Si, until dodges introduced the Neon SRT-4 for the 2003 model year.

Like the Civic Si, the Neon had humble roots. The dependable sedan was a good choice for the buyer who wanted a no-frills, fuel-efficient daily driver for commuting to work.

However, to match the imports, Chrysler decided to convert the docile Neon into a “Street and Racing Technology (SRT)” machine incorporating performance features rarely found in a compact car.

At the time of its launch, the Neon SRT-4 was the second-fastest production vehicle in the Chrysler family, only behind the powerful Dodge Viper. The souped-up Neon was an instant hit, with sales exceeding 25,000 units by the end of production in 2005, although Dodge execs had targeted sales at only 2,500 cars per year.

Here are the features that make the Neon SRT-4 one of the best high-performance compact cars ever made.

A Turbocharged Four-Cylinder Qualifies As Street And Racing Technology

Dodge produced the Neon SRT-4 for three model years offering only one engine option during the limited lifespan. One of the first tasks tackled by the SRT-4 Performance Vehicle Operations (PVO) team for the new 2003 model was replacing the underperforming Neon 2.0-liter naturally aspirated four-cylinder with a turbocharged A853 2.4-liter four-cylinder producing 215 hp and 245 lb-ft of torque at 3,200 – 4,200 rpm.

However, the most significant power improvement feature was the Mitsubishi TD04LR-15Gk turbocharger. Due to limited space for the power plant, engineers redesigned the turbine housing and exhaust manifold, casting them into a single piece. The smaller component was more efficient, improved flow, and reduced thermal mass.

Dodge bumped up the performance in 2004 to 230 hp by employing larger fuel injectors and improved engine management software. 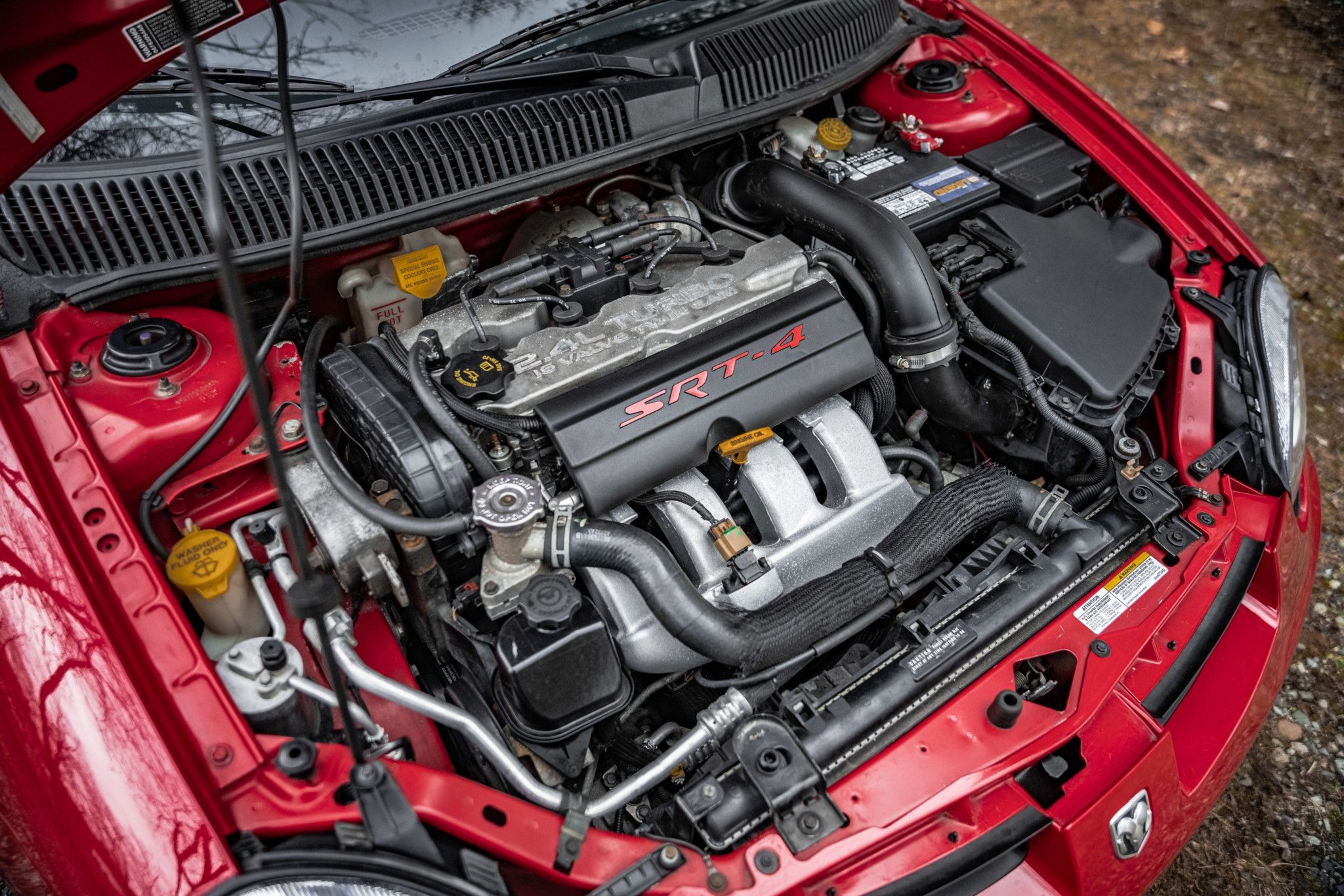 A wolf in sheep’s clothing, at first glance the Neon SRT-4 doesn’t strike fear in the hearts of casual observers like the Dodge Charger, Challenger or Ford Mustang muscle cars. Despite exterior improvements over the original Neon, the SRT-4 still looks like a commuter car.

The Neon SRT-4 may very well have been the quickest front-wheel-drive production automobile in 2003, and it most certainly was the fastest FWD for the price.

The turbocharged 2.4-liter four-cylinder transverse-mounted front-engine powered the Neon to 60 mph in a mere 5.3 seconds on it way to a top speed of 153 mph. The 2004 model improved acceleration to 5.0 seconds.

By comparison, none of the Neon SRT-4’s principal competitors has performance even close. The Mazda Miata accelerates from 0 to 60 mph in 8.0 seconds, the Acura Integra in 6.8 seconds, the Honda S2000 in 6.1 seconds, and the Civic Si in 8.3 seconds.

The PVO team upgraded several components to match the additional power of the turbocharged engine.

In addition, the design team fitted the SRT-4 with unique wheels that allowed for increased airflow to the brakes and more efficient cooling. Dodge improved traction by replacing the stock Neon wheels and tires with 205/50/17 Michelin Pilot Sport performance tires and 17 x 6-inch cast-aluminum wheels.

Related: These Were The Fastest Turbocharged Cars Of The 1980s

Dodge made several changes to the interior of the standard Neon for the SRT-4. The new seats mimicked those of the Dodge Viper SRT-10, with robust lumber back and side support to keep occupants in place during spirited driving.

The dashboard hosted unique SRT-4 gauges including a turboboost gauge on the right side of the instrument panel, and Dodge engineers installed a faux carbon fiber steering wheel and aluminum pedals.

Despite the upgrades, the SRT-4 lacked some refinements found in its competitor, the Civic Si. The compact car had electric power windows only in the front, while rear passengers manually open and shut the windows with a crank. Dodge also made extensive use of plastics for the interior, giving the cabin a feeling of poor quality construction.

Related: 5 Dodge Muscle Cars We’d Love To Own (5 That Are Best Avoided)

However, the compact car is a challenge to find because of its limited production run of only three years. Furthermore, tuners have modified many of the available SRT-4s, making a stock SRT-4 somewhat difficult to find.