Our conversation started late last year. A phone call to Luther Burrell to ask about racism in rugby was met with an immediate answer: ‘It’s rife.’

A few months later, he agreed to meet for an off-the-record dinner. Towards the end of the meal, he pulled out his phone and opened up a group WhatsApp chat. 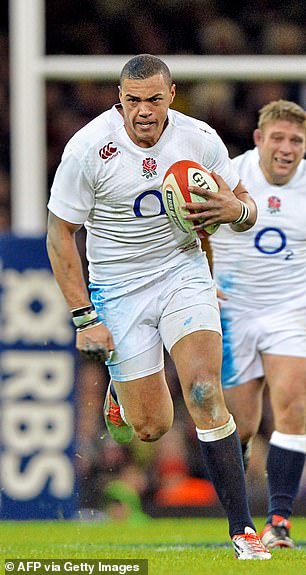 The next notification showed a different player immediately leaving the group. ‘This was three days ago,’ he said at the time.

At that point, Burrell was too afraid to share his stories beyond the dinner table. Reluctant to break the changing-room code.

He went away to speak with his father, Geoff, who has roots in Jamaica and battled with racism in his younger years.

‘There were also conversations with team-mates — old, new, black, white — before he agreed to get together in Leeds this week.

We meet at the locks in the city centre. He orders a coffee for a quick caffeine hit. ‘I didn’t sleep much last night,’ he says.

‘I’ve been nervous about doing this. It’s a scary subject to broach, isn’t it? I don’t know how it’ll be received.

‘My dad asked me yesterday if I was going to do it and said he’ll back me whatever I decide. He was going to come along with me but he’s not well, on dialysis.

‘Don’t get me wrong, I’ve said things that have probably crossed the line. Naivety, insecurity, wanting to fit in, the need to be liked. I’m not proud to admit that, but things are said in the changing room that shouldn’t be said.

‘A lot of it doesn’t come from a bad place but that doesn’t make it OK. This isn’t a witch hunt and I don’t want people to feel sorry for me. A lot of what’s said isn’t even malicious, but it’s become normal and it needs to be addressed.

‘My son and daughter, three and five, are mixed race. Would I be happy with them getting the same racial “banter” from their friends? Of course not.

‘There are numerous players in numerous environments who have experienced it. I could say nothing and carry on as normal but it needs to be spoken about.

‘Maybe it will empower the next generation to call it out and force change. It’s a touchy subject and I’m scared how people will receive it but, in the grand scheme of things, why should I care? 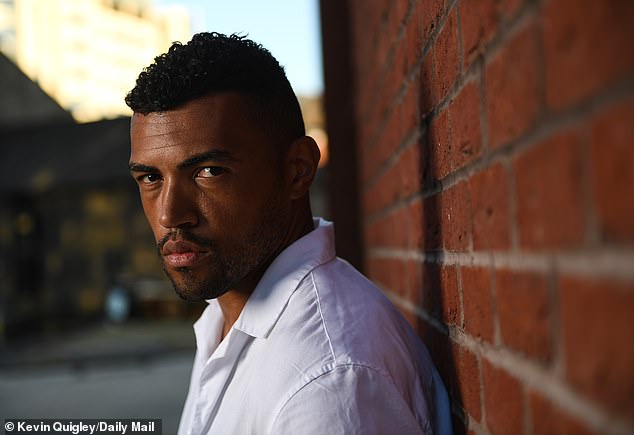 ‘It’s factual. I love our sport and I want to see it move forwards.’

Burrell has been in the professional game since 2006. The sport has moved on since then but, as we are about to find out, not everyone has moved with it.

He wants this conversation to empower the younger generation — and it starts with sharing his own experiences.

‘You’ve seen some of the messages. Things get said in jest without any thought.

‘I’ve heard things that you wouldn’t expect to hear 20 years ago. We had a hot day at training and I told one of the lads to put on their factor 50. Someone came back and said, “You don’t need it, Luth, put your carrot oil on”.

‘Then another lad jumps in and says, “No, no, no, he’ll need it for where his shackles were as a slave”.

‘Excuse my language but, what the f***? Where does that come from? Some players shake their head and others laugh along with it. 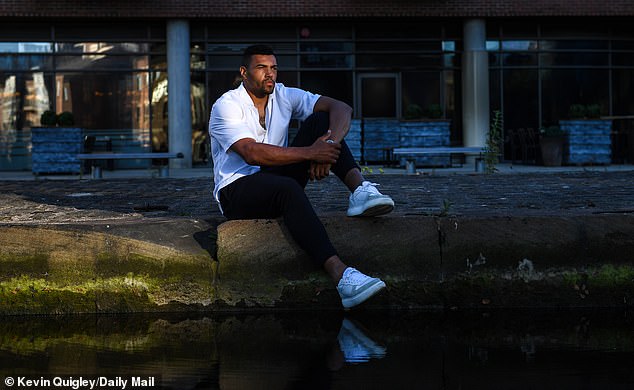 ‘It’s emotional, tiring, but needs to be done’: Burrell cannot believe racism is this bad in 2022

‘People greet you as, “What’s up my n*****?” It’s not meant in a bad way but when is it going to change? It’s a very, very raw subject. Over the past few years, it’s happened a lot. That’s the environment.

‘It’s normalised because I allowed it to become normalised. I’d laugh it off. I’ve been a cowward by not speaking up.

‘Over the years I’ve become thicker skinned. You know how long I’ve thought about talking about this. I will never name names but it’s gone on for too long.’

For the entire evening, Burrell, 32, speaks to two other black players on the phone and briefs them on the interview he is doing. They salute him, yet they are reluctant to share their own experience.

‘The young guys aren’t going to say anything, are they? There’s seniority in rugby environments. If you’re a 20-year-old you’re scared of getting told to shut the f***up.

‘After a few beers I’ve said, “Mate, you’ve got to stop saying that” but it never changed anything. You just get, “We love you really mate”. 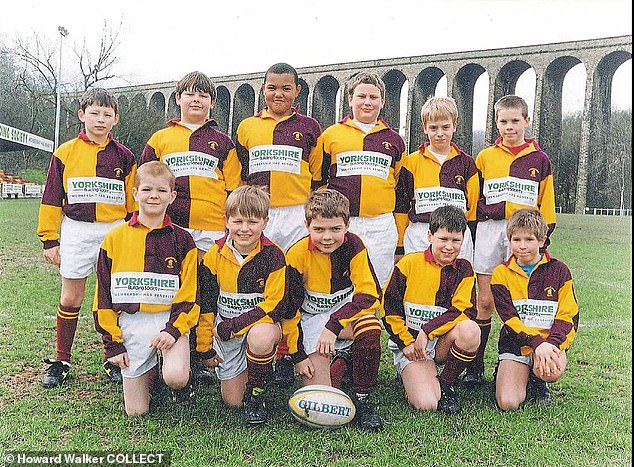 The ex-England star (back row, third left) played in the Huddersfield under-12s as a youngster

‘All these things run through your brain: if I’m liked by my team-mates, have I got a better chance of playing? Rugby’s a high testosterone environment with a lot of big personalities. 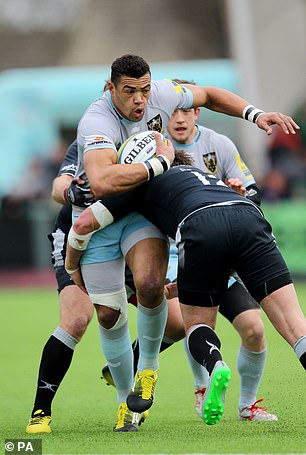 He played for Northampton Saints, Newcastle Falcons and Sale Sharks during his career

‘When you’re in that environment, you’re treading on eggshells because you don’t want to become segregated from the group.

‘Hopefully clubs, coaches, directors of rugby read this and it starts a conversation.

‘I’m sure there are clubs that don’t have a problem but I know it’s wider than just one club. In the real world, normal work places, you’ve got things like HR departments. Rugby doesn’t have HR departments.

‘I’ve relayed things to my non-rugby friends and they’ve just said, “Wow”. By starting a conversation, maybe it can empower others to say, “Pack it in”.’

We stop for dinner and chat about the lay of the land in English rugby. He talks about the fond memories of playing his final Premiership game at Franklin’s Gardens, before returning to the conversation at hand. Does he believe changing rooms would benefit from more diversity in social class?

‘Rugby’s definitely got a class issue. Look at the messages Ellis Genge was sent on Sunday morning, calling him an*****.

‘Would Maro Itoje receive the same messages? I don’t know. They’re from very different walks of life. Maro’s from a private school and ticks a lot of the traditional rugby boxes. 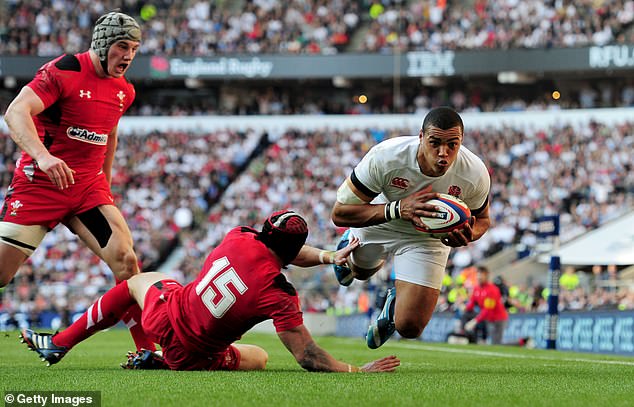 ‘Ellis is a council estate lad. Are there many Ellis Genges around the league? I don’t think there are. When I was in the England team, the only person with a similar upbringing to me was Kyle Eastmond and he walked away from the game aged 31.

‘How many professional rugby players were given lunch tickets at school because their mum earned less than eight grand?

‘I grew up on a council estate in Huddersfield, my parents worked exceptionally hard and I wasn’t given any freebies. Do football changing rooms have this type of stuff being thrown around? No, because it’s far more diverse.

‘I remember going to after-match dinners at Twickenham and feeling awkward when I was always asked which school I went to. You’d feel judged. Now I look back and I wouldn’t give as***.

‘Nobody can take anything away from what I’ve done. It was only around the suits, the blazers, that I felt like I didn’t fit. I didn’t have any similarities with those guys. I felt out of place, like I had to be something. Sometimes that persona worked in my favor because it would open doors for you.

‘You see the rugby culture and you see the cricket culture. They’re a very similar class; guys from these feeder schools. The stuff that came out of cricket last year recently didn’t surprise me.

‘Where do I think it’s gone wrong? It’s just become the norm. I’m not going to sit here and say we need more black people on boards or whatever. The change has to come from within but it won’t happen overnight. You need to plant the seed. 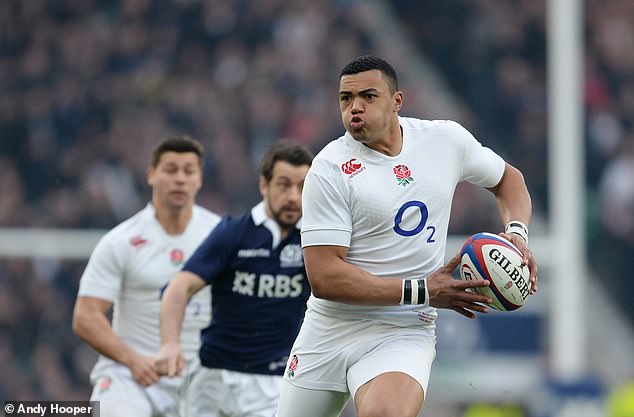 ‘The messaging isn’t there at the moment because people don’t know what’s going on. People don’t speak about it.’

Having potentially played his last game in English rugby, Burrell is now more confident to find his voice. Perhaps his next move will be to Japan. Perhaps he will become an advocate for social change.

‘We discuss the future — joking that he may end up with a role on the board of the RFU — before he offers some final thoughts on the theme of the evening.

‘The white people were all helpful but they said things like, “Ooh, do you not want to get your next contract sorted first?” If that’s the attitude, then I don’t want a contract at those clubs.

‘When I spoke to my dad about all of this, he was disappointed. He didn’t really know how to take it. My dad’s someone who goes about his business quietly.

‘He told me about his experiences of racial prejudice from a long time ago and we both want to see things change.

‘I want to look back in 15 years with my old Northampton team-mates and see how far the game has moved forward. My son’s three years old and already tells me he wants to be a rugby player. Maybe my daughter will, too. 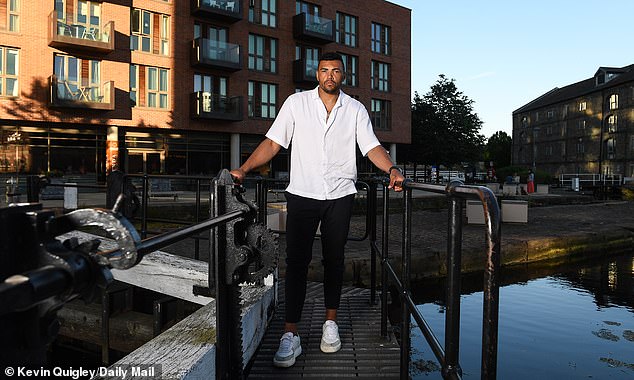 Burrell, who is of Jamaican descent, knows he would regret not speaking out about racism

‘I want their experience to be a lot better than mine because my path hasn’t always been easy.

‘It’s mental we’re sat here having this conversation in 2022. It’s mental, emotional, tiring, but needs to be done. If someone said those things to you in the street you’d knock their head off.

‘I know if I don’t do this I’ll look back and regret it. I’ve still got rugby left in me and I’m excited about what comes next but, when I do retire, I want to walk away with my head held high.’