On Saturday 28th May, the IJF delegation arrived in the small village of Khumjung after three days of hiking, led by Sabrina Filzmoser, who on 16th May reached the summit of Everest at the end of more than two months of expedition. Lower than Sabrina’s achievement, which peaked at 8849m during her Forever Everest challenge, Khumjung was nonetheless a high target. First of all, because it was necessary to climb along steep paths, but more importantly because Khumjung was to be the scene of a great celebration on the occasion of Everest Day.

So, on Sunday 29th May, the whole Khumjung community gathered around a tatami that was installed in the center of the courtyard of the Sir Edmund Hillary Khumjung School, to celebrate Everest but also to celebrate the official launch of judo classes at 3800m altitude, the highest judo club in the world.

For many years Kazi Sherpa has been the key person developing judo in the region and the least we can say is that he succeeded with more than 90 judoka being members of the Everest Judo Club today. This could be seen as something normal, but it isn’t. Building a judo club is not an easy task, but doing it in the remote Khumbu Valley is of course not as high as the Everest peak but it is pretty challenging. Kazi Sherpa managed to gather together his community and the impact of judo is already clearly visible, with the presence of the IJF delegation, the Nepalese Judo Federation President and Secretary General as well as the national coach and important political personalities, who for sure will be willing to support the development of judo here even further. 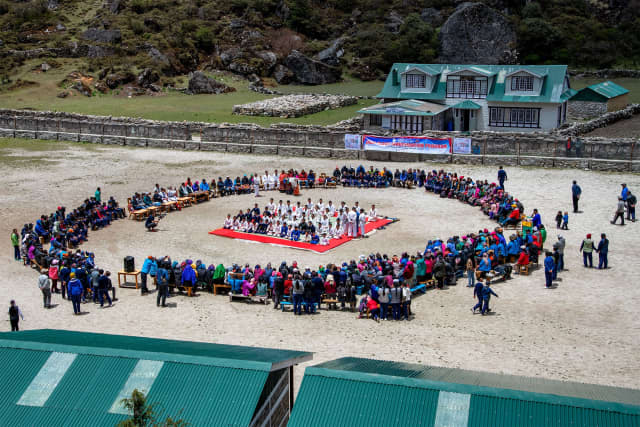 Remote communities don’t have natural access to all the world’s sports. Judo in Khumjung seemed, at first, very strange with many older residents unsure of its value, not understanding it’s objectives in either the sporting or philosophical context. Setting up a club in Khumjung is not just about providing mats and a coach but is about finding a way for a whole community to learn about judo and to accept the sport at all. Kazi Sherpa has managed this and not always in easy conditions. This day is therefore very special for him and his young judoka. It is an acceptance of judo into the community, right into the heart of the community. It is fully integrated, a central hub. All expectations have been exceeded. 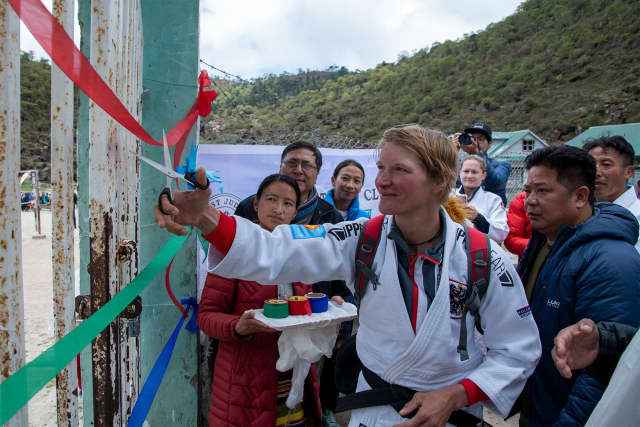 The guest of honor of the 29th May celebration was obviously Sabrina, who has been supporting Kazi Sherpa and his team for many years. After the success of the Forever Everest project, she was welcomed warmly by the whole town with traditional scarves placed around her shoulders. These scarves are given to offer protection, to bless a person, to offer gratitude and also thanks. Sabrina’s shoulders were piled high and everyone wanted to have contact and offer Sabrina their scarves. She and the whole delegation walked through a human tunnel of applause, full of smiles. It was an emotional experience and illustrated the strength of feeling and the unity created around the Everest Judo Club and it’s Austrian patron. 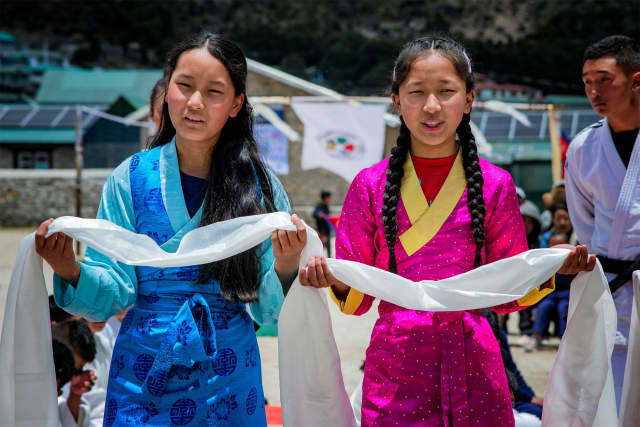 From the special hello, we then experienced a well prepared judo demonstration and some colorful traditional Sherpa and Nepali dances. The local women’s group performed a traditional Sherpa song and the younger generation were proud to dance on the tatami and were applauded loudly by their peers. 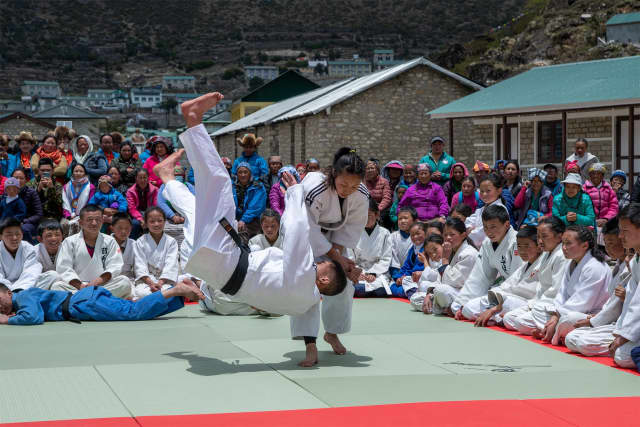 We will remember the special atmosphere that reigned all day long. In the morning the clouds had invaded the landscape and it was hardly possible to see a few steps away but as soon as the ceremony began, the sky opened up and warm rays of sun came to shine on the tatami. Many generations of Sherpas were present, from the youngest ones, who will benefit from the judo values, to the parents and grandparents, who enjoyed watching their children having fun practicing judo. It must be said that the whole cultural program was uniquely intertwined with the judo community. 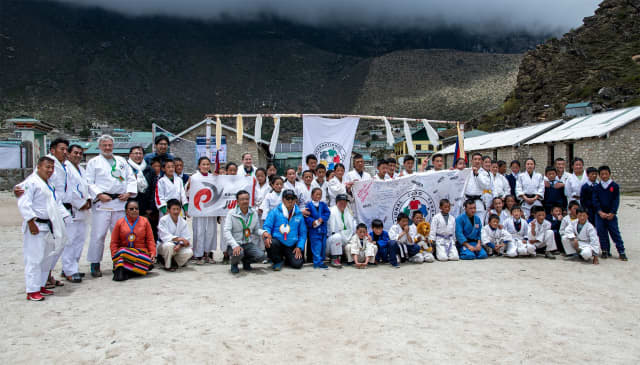 Sabrina reached the summit of Everest and judo has now clearly reached the highest altitude of Nepal. The tying together of generations and communities is the true message of today’s Everest Day celebration. It was a success, a beautiful and clear success that will radiate in Khumjung, in Nepal and throughout the world.