Alexis Hipsky struggled with an eating disorder for eight years.

“Coming into high school I was almost at 200 pounds,” Hipsky said. “Going into my sophomore year, I lost 70 pounds basically from not eating and excessively exercising because I wanted to be in show choir so bad that I felt I had to look a certain way. Being in the (show choir) program, there were some great things about it and some not so great. Until the end of my sophomore year, I struggled with it until I started going to The Cabin (a mental health counseling center). It was more a personal battle than anything going on with the program.”

Now, Hipsky has a platform to share her story and help others.

Hipsky, a 2022 Zionsville Community High School graduate, is one of five Miss Indiana contestants from Zionsville who will compete from June 13 to 18 at STAR Bank Performing Arts Center in Zionsville. The others are Olivia Broadwater, Emilee Hunt, Sam Robbins and Shaylee Barnes. The winner will advance to the Miss America competition.

Hipsky created a club her junior year that has the same name as her platform.

“It’s an area for young men and women to come in after to school to talk about different things and where they can go to get help,” she said. “I want to be a voice for people who are struggling because I didn’t know where to go and where to start. It’s a big problem people don’t know how to fix and how to help. It ends up leading you down a dark road.”

She has been working with The Cabin providing resources to the high school.

Hipsky first competed in a Miss Indiana competition in 2021.

“My mom didn’t tell me she signed me up in September (2021),” Hipsky said. “She said, ‘You’re going to be competing in Terre Haute in a month so you better get some stuff together.’ We threw things together. I didn’t know a lot about it. I went and didn’t do the greatest. I ended up enjoying it. My mom said let’s see if there are any closer.”

Hipsky competed in Miss Fall Festival in January and won. She will be singing as part of her talent. 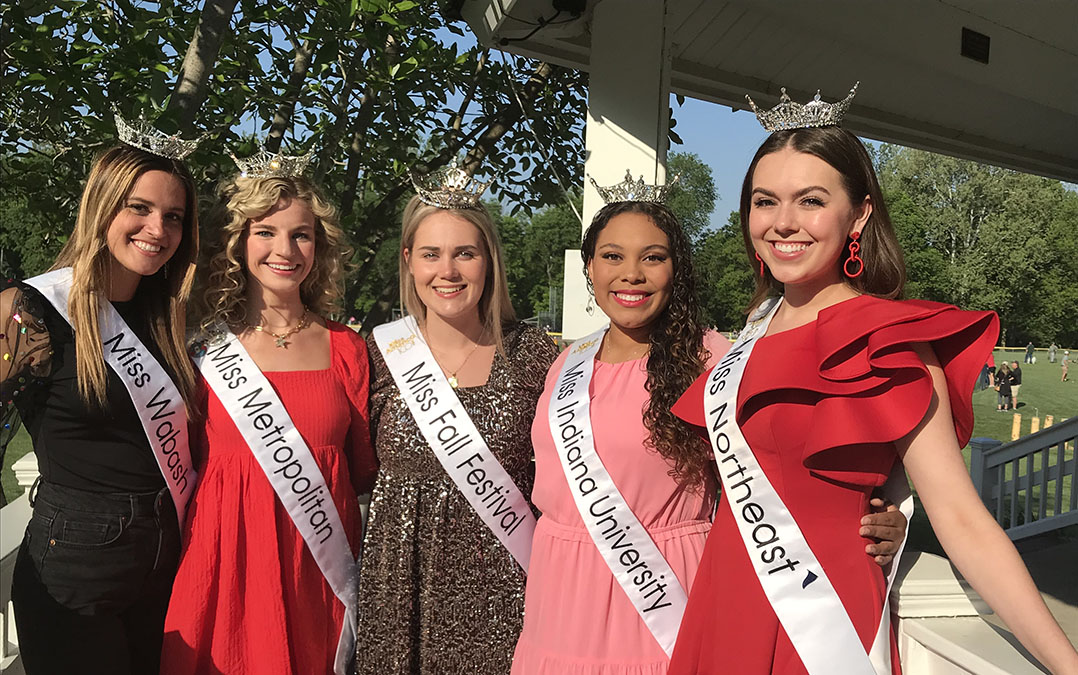 “I learn a lot about myself,” she said. “I learn a different thing every year. My personal growth has been beyond what I could ever imagine for myself in this period of time. I was someone who had social anxiety and was just terrified of interacting with people, talking with people and taking risks. To be where I am now as a confident adult is amazing and it really is thanks to this program.”

Robbins said she had anxiety when she was young until early high school, although she still has instances of it.

“Having the fun aspect of it in a safe space made it really easy to challenge myself in a way I wouldn’t be able to in other organizations,” she said.

Robbins will tap dance as her talent to the song “Groove is in the Heart.”

“I actually rapped my first year as a teen (contestant),” Robbins said. “But I’ve tap danced ever since.”

A full-time graphic designer, Robbins, who lives in Indianapolis, will serve as his own choreographer. She teaches tap dancing at Village Dance Studio.

“It challenges me in new ways every year,” Robbins said of the competition. “You have to find new ways of being better, improving yourself but also not comparing yourself to the past you. I’ve accepting who I am. It’s cool because I can do that and have an enjoyable time. For me, it’s like sparkly summer camp. I get to have fun and really connect with people.”

As a Miss Northeast winner in Fort Wayne, Robbins has logged more than 150 service hours in Indianapolis and Fort Wayne. She has driven more than 80 hours between both cities.

“I used to be scared of driving, too, so it’s pushed me out of my comfort zone to drive up (to Fort Wayne), sometimes every weekend,” she said.

Broadwater’s social impact initiative is Singing for Smiles, which advocates for music therapy for people with Alzheimer’s disease.

“It’s been very exciting as facilities and memory care centers have started to open up more (after COVID-19 shutdowns),” Broadwater said. “I’ve been able to go and sing and meet with the leaders of those facilities. It’s insightful how Alzheimer’s and different forms of dementia (affect patients). I am able to see the impact music has on them.”

Broadwater works with Perfect Harmony, the Center for the Performing Arts’ program that works with people with Alzheimer’s.

“I’ve seen a lot of different things grow and use my platform around the community more,” said Bridgewater, a Ball State University musical theater student who is interning with Civic Theater’s Youth Artists Program.

This will be Broadwater’s first time staying with the other contestants at Butler University.

“I’m excited to have that full experience at Miss Indiana that all the past generations always talk about,” she said. “It’s like a big sleepover for everyone. I’m excited for the opportunity to get to know them all better and get closer.”

Emilee Hunt, a Terre Haute North graduate who moved to Zionsville 1 1/2 years ago, previously competed in Miss Indiana in 2019.

“I won the nonfinalist interview award,” she said. “I had no expectations for the week, so I was over the moon to get an award.”

Hunt, 25, said she took time away from contests to concentrate on her career after college.

“I took a bit of a break and decided I wanted to come back again,” said Hunt, who is manager of communications for Andretti Autosport. “It’s going to be fun to be around the girls I’ve been competing with and get back into it.”

Hunt’s platform is Living with Lupus and raising awareness for invisible illnesses.

Hunt has Lupus, POTS, or postural orthostatic tachycardia syndrome, and Raynaud’s disease, a circulation condition that causes numbness in the fingertips and toes. Lupus and Raynaud’s are often connected, she said

“POTS is in a whole other family. I just got lucky to get it, too,” she said, laughing.

Hunt was diagnosed with the circulation disease at age 9, Lupus at age 16 and POTS at 18.

Hunt will perform a lyrical dance, a slower emotional dance, that she chose because of her chronic illness.

“Usually, I do a jazz dance, so this is a bit different for me,” she said. “The fast-paced jazz got to be too much. This is a switch up for my own body. It gives me more chance to breathe for a second before I keep sending my body into overload. This is a bit out of my comfort zone. I used to be a technically trained dancer, but as I got older I don’t go to classes anymore. I’m having to brush up on my skills.”

Shaylee Barnes, a three-time contestant in Miss Indiana’s Outstanding Teen, is competing in Miss Indiana for the first time. The 2021 ZCHS graduate recently finished her freshman year at Indiana University, where she is majoring in neuroscience with a dance minor.

“My mom worked in the Lebanon Children’s Home, so I was around,” Barnes said. “My family was always very vocal about mental health, so we’re always able to talk about it. I think that’s very important in understanding mental health and bringing awareness to it. You should have the ability to talk about mental health to anyone, peers, trusted adults, teachers and things like that. It should be talked about as any physical or seen illness because mental health (conditions) are just invisible illnesses.”

Barnes will sing as part of her vocal talent.

“It’s a little more rock but I like to keep it jazzy,” said Barnes, who wants to keep her song a surprise.

Barnes participated in the show choir at ZCHS.

“Singing and dancing are both very important in my life,” she said.

Barnes looks forward to spending time with the other contestants.

“I love the community,” Barnes said. “I’m excited to see the Miss Indiana side of it.”