I finally got to drive the latest Ford GT. And everywhere I went, people were just as excited as me to see one – on the road, not on auction stages where the Faberge-rare Ford has fetched as much as $1.5 million.

Driving Ford’s 660-horsepower, 216-mph missile in New York was like being a street-corner dealer, handing out potent, “Code Orange” capsules of automotive bliss to car fans. People pulled cars over or formed eager knots every time I stopped. Two questions were on every quivering lip: “Where’d you get one?” and “How’d you get one?” And that was before the inevitable queries of what the car cost.

“I can’t believe it’s a Ford GT!” said one young man, just after I’d rocked the Ford on cliff-hung roads overlooking the Hudson River near West Point. These crazy reactions and the hypercar-style performance also softened my heart toward the GT.

Many people, including me, had only ever seen a third-generation GT during its surprise, daylight robbery of the Detroit Auto Show in 2015. Auto scribes scoured the Internet thesaurus for superlatives. But like the only sober person in a room full of drunks, I was strangely unmoved. A $450,000 Ford? With an Ecoboost-branded V6, and its whiff of Eau de Dearborn? 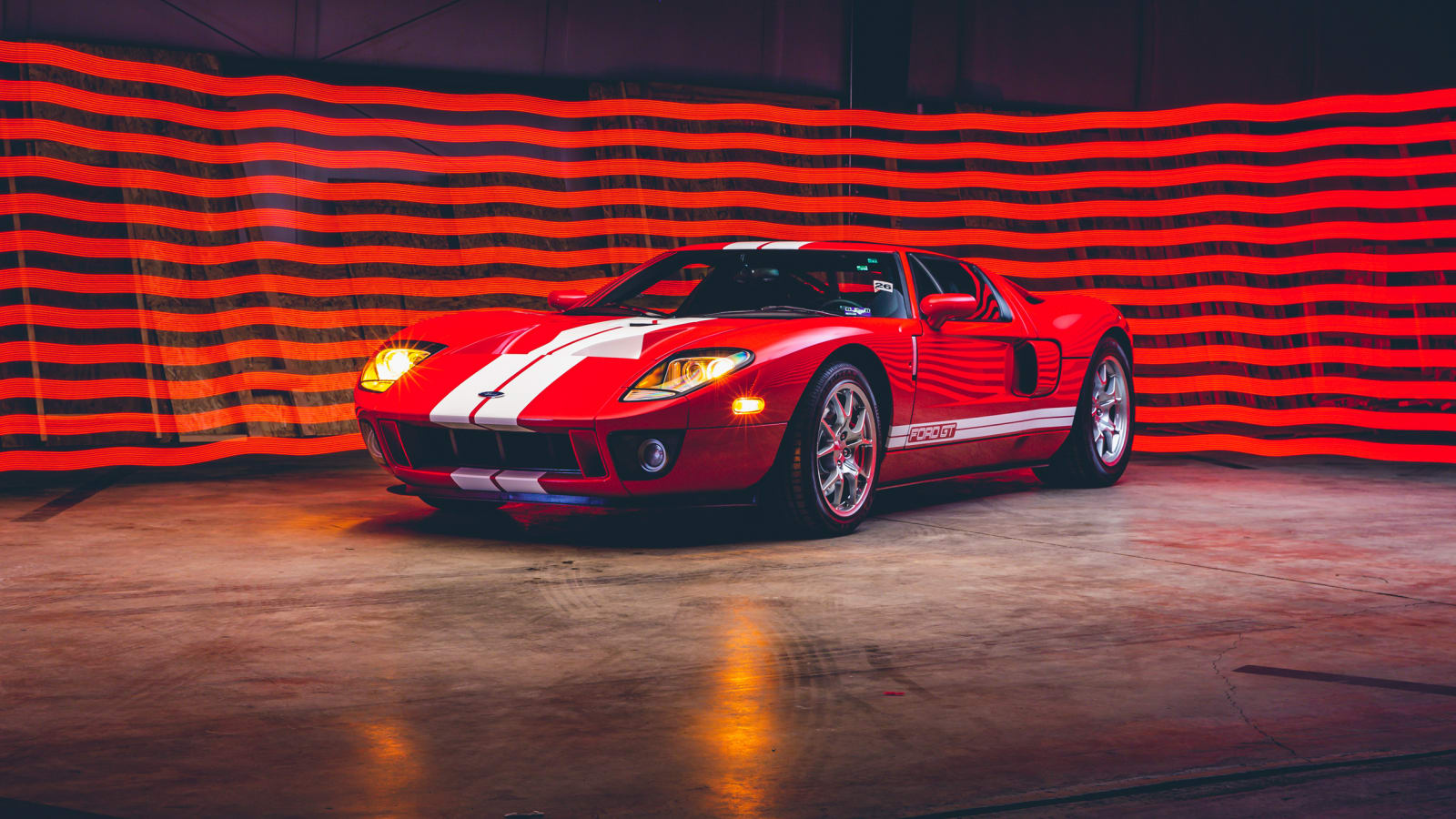 Also, my heart still belonged to the second-generation GT of 2004-2006, pictured above. The retro-style, V8-powered GT nailed the underdog charm and Motown menace of the LeMans-winning racers. That included the Ford’s one-two-three podium sweep in 1966, the feel-good story given (finally) its mainstream due in last year’s ford v Ferrari. The crowd-pleasing film paid sepia-toned homage to car builder Carroll Shelby and British racer Ken Miles, breezing past the fact those original GT chassis were built in Britain. But following Miles’ death in August 1966, it was Shelby’s all-new Mk IV car that AJ Foyt and Dan Gurney piloted to 210 mph on the Mulsanne Straight to win LeMans in 1967. That Mk IV, powered by a Ford 427, remains the only all-American entry – design, build, engines, drivers – to win the 24 hours. It also birthed the first street-going version: The oddball Mk III, with 306 horsepower from a Holley-carbed, 289-cubic-inch V8. With a 2,200-pound curb weight, the Mk III could still rip to 60 mph in 5.1 seconds.

Only seven GT Mk III’s were built, ostensibly “priced” around $18,500 (or $138,000 in 2020 money). But there seemed a direct line between all previous GTs and the 2004-2006 model, with 540 horsepower and 205-mph peak from a supercharged V8. Ford asked me to drive that one from Detroit to New York in 2005. And its proud Americanness came in handy when I got pulled over in Pennsylvania for making mincemeat of the local speed limit. The Ford driving cop totally let me slide, too busy enthusing over the car. It helped that this GT was priced from $143,000 – rich for a Ford, yet comfortably in Porsche 911 Turbo territory – and that the company built a reasonable 4,308 units.

Today’s GT seemed to break that historic link, psychologically and financially. To Ford’s credit, as with the latest Mustang, it didn’t simply rehash past glory with another retro take. Admittedly, the interstellar, carbon-fiber catamaran on display in Detroit looked amazing, from its scissor doors to its racing stripes. But when Ford started talking a $450,000 price, a 1,350-unit production run, and vetting buyers like fathers grilling a daughter’s prospective date, they kinda lost me. I thought Ford wanted to beat Ferrari, don’t join them. It all seemed a hermetically sealed marketing stunt. Was Ford out to satisfy real customers, or to bask in its own nostalgic reflection? That sense grew when Ford sent the GT back to LeMans for a dominating class win in 2016, its skids so greased by race rulemakers as to seem nearly pre-ordained. Ford decreed that owners would be prohibited from reselling their cars for two years. But it was Ford that poured gasoline on the secondary market and lit the match in the first place, via the air of unobtainium. Suddenly they were shocked (shocked!) that buyers might consider selling their appreciating cars to the highest bidder? Ford even sued Mecum Auctions and a few rogue owners to halt transactions, even as it trumpeted its own, track only GT Mk II edition – a mere $1.2 million, limited to 45 copies. Hurry, billionaires, before they’re gone! Apparently, seven-figure GT sales are fine, as long as the money is going into Ford’s pocket.

It all seemed reminiscent of Lexus and its $375,000 LFA, another unreasonably exclusive, overpriced supercar that was more like a theoretical particle: Flashing into view like a Higgs boson, then disappearing back into the shadowy, quantum realm of collectors’ garages, never to be seen again

And yet. The 2020 Ford GT I drove was the kind of wicked, transgressive fun that few modern supercars deliver. This press car, with nearly 16,000 miles on the odo, felt like a racecar that got lost en route to LeMans. The twin-turbo V6, now with 660 horsepower (up from 647), throbs with raw promise at idle. After a beat of turbo lag, it catapults the GT with thrilling focus, making occupants feel like a baseball from Clayton Kershaw’s hand. It fills the cabin, with its 43.7-inch-low roofline, with a thrash-metal shriek that drowns out conversation and human thought. The engine may as well be in your lap. The seven-speed, dual-clutch transmission isn’t the most sophisticated, but it still snaps through gears, as LEDs in the steering-wheel rim signal the 7,000-rpm redline, at which point the GT seems bent on sampling that 216- mph apogee. The rear-drive design helps handicap this car to a relatively modest 3.0-second sprint to 60 mph, despite sticky Michelin Pilot Sport Cup 2 tires. But a 10.8-second catapult through the quarter-mile, at 134 mph, tells the truer story.

Acceleration is a given among hypercars – yes, hypercars, as the GT reminds me far more of early Koenigseggs than run-of-the-mill Ferraris and Lamborghinis. What separates the GT is steering and handling. In an era of electronically mediated performance, the Ford’s is beautifully pure and unfiltered: Quicksilver steering guides the GT with millimeter-accurate precision, while transmitting every pavement ripple and nick through its Alcantara-wrapped wheel. Yet the car never feels darty or hair trigger. Tire adhesion is ridiculous. The faster you go, the more the Ford bolts itself to the road, including its burly aero wing that pops up above 70 mph, and also acts as an air brake, in cahoots with carbon-ceramic stoppers. That rear wing, on hydraulic stanchions thick enough for service-bay duty, can be fixed in up or down positions. The adaptive suspension, with its trick Multimatic spool-valve shocks, is taut, yet it didn’t pound car or occupants to jelly through the gantlet of Brooklyn and Manhattan. It’s Multimatic that actually builds the GT in Markham, Ontario, including roughly one copy per month of a new Liquid Carbon edition. Its exposed carbon-fiber body adds $250,000 to the price. 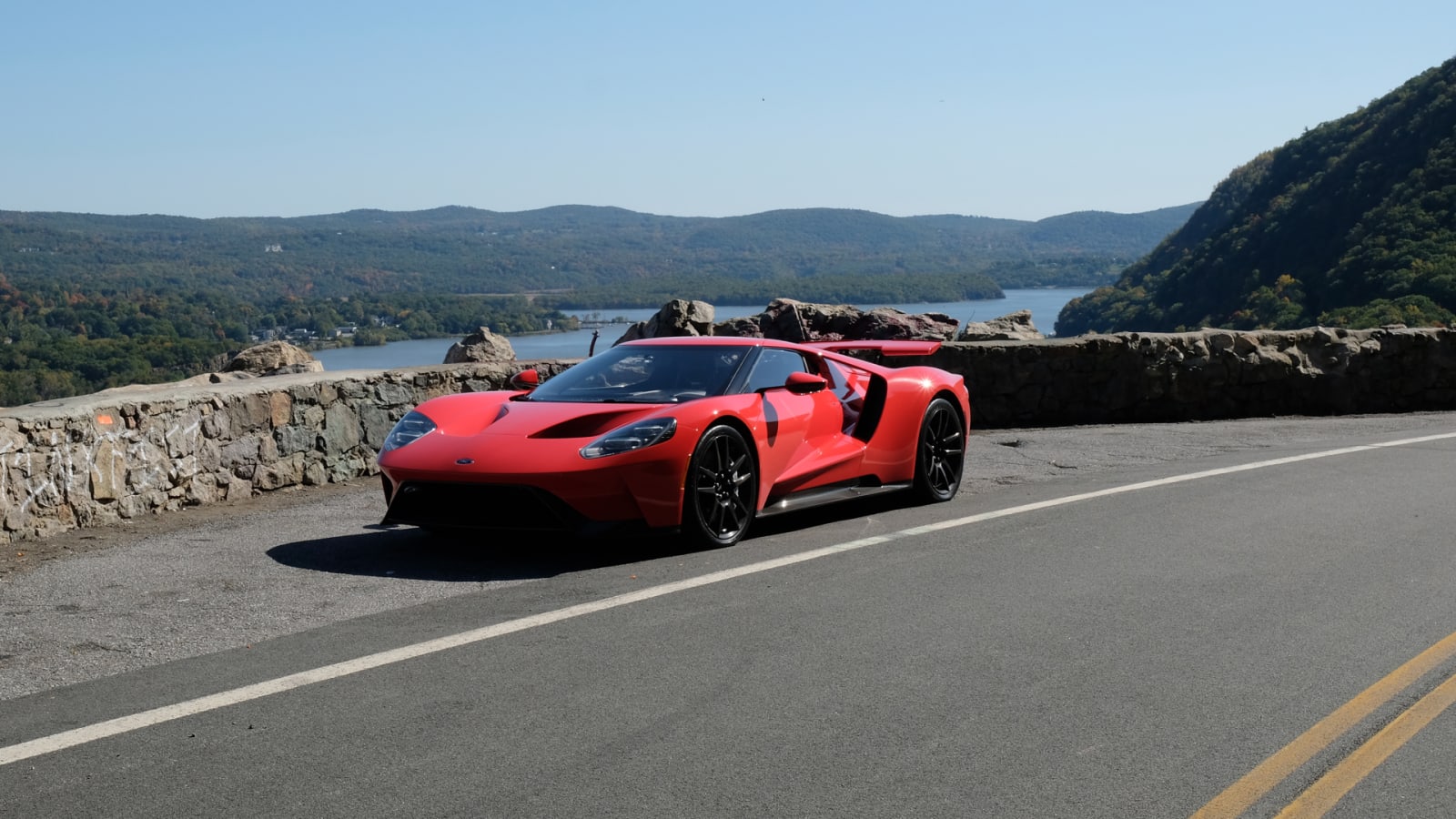 After an epic driving day, I was simultaneously spent and giddy from sensory overload. Then, one last sensation: A firecracker boom as I wound through Harriman State Park, so loud that I thought the engine had blown. Ears ringing, I hopped out and found the glass panel, separating the engine bulkhead from the cabin, cracked in multiple places. I restarted the car, and though it limped the remaining 48 miles home to Brooklyn, it had almost no boost, and emitted a moan like a tubercular cow. I suspected the GT was running on one turbo or less, and the hunch seemed right: Ford later said a boot connecting a throttle body to a turbo had come loose. Violently, in terms of that busted window, but no lasting harm done.

The accessible, “everyday” supercar is the new industry target, from the Acura NSX and Porsche 911 Turbo to the various Ferraris and McLarens. That is not this car. Sensation aside, the Ford GT doesn’t care about your tender feelings. A shower of pebbles and road dirt, kicked up by near-slick performance tires, churned through wheel wells, sounding like 100 rainsticks taped inside the cabin. The cabin, with its aggressive teardrop shape, is more like a space capsule. Strapping on a helmet would have forced me to scrunch down in the Sparco racing seat to fit my noggin inside. Press a switch to lift the bumper to clear steep driveways, and instead of the usual elevator hum, the Ford snaps crudely upward like the head of a Rock ‘Em, Sock ‘Em Robot. It does the same when dropped into aero-boosting Track mode, so low that a squirrel couldn’t limbo underneath. It looks badass, and unlike many “Track” modes, Ford’s really is for track only.

The interior is mostly crap for a $500,000 car. It proudly exposes the carbon-fiber monocoque, but it also has Garmin-like displays, an afterthought infotainment system and some switches that might pass pattern in a Mustang. Seats are carbon-fiber buckets with no fore-and-aft or height adjustment, only a fabric strap that yanks the foot pedal box into proper range. And there’s essentially zero cargo space, only a bin aft of the engine that might fit a backpack, if it wasn’t already half-filled with a tire-inflator kit. The hardcore GT makes a Lamborghini Huracan seem like the Audi family in terms of luxury, comfort and versatility.

For all that, I now absolutely understand why a filthy-rich guy would park a GT next to his vintage racers, the Riva yacht and fourth wife. The GT drives like a Hollywood dream, one in which Ken Miles looks like Christian Bale, and Matt Damon was born in a Stetson. It’s a track toy no other boy has, an Ariel Atom times 10, but with a better backstory and a potential investment upside. I just hope said guy actually drives his GT, at least on fourth-wife anniversaries.

Is Ford’s “pinnacle of performance” really worth $500,000-and-up? The market says yes. Should Ford feel even a little bit ashamed of itself? I’ll let you answer that one.