The cultural freedoms and creative expression of the late Renaissance and Baroque would not have been possible without humanism and its restoration of the classics. Its influence on the sciences was profound and Galileo Galilei himself called Archimedes “his master”. If Galileo drew a clear line between the classics and modern science, then Francesco Ventriglia can also be seen as expanding on the heritage of ballet to create a new choreographic vocabulary. His latest work, Galileois both a showcase for some of the most talented young dancers in the country and a thrilling scream for attention from one of the freshest choreographic voices to emerge in recent years.

What makes Galileo all the more exciting is the fact that it is unashamedly grounded in the discipline and technique of classical ballet. It also avoids the trap of adopting the all-too-ubiquitous shorthand of today’s contemporary dance. Where so many choreographers fall victim to the seemingly overpowering influence of hip-hop, Ventriglia incorporates it like a fine chef adds a dash of spice. He also adds other flavours, albeit sparingly, that recall milestones in the history of dance. These range from Baroque steps to hallmarks of the Ballet Russes, in particular the works of Vaslav Nijinsky.

Just as Nijinsky had his dancers cupping their partner’s head in their hands in 1913’s Jeux, Ventriglia used this gesture to explore Galileo’s principle of heaviness, as his dancers repeatedly catch each other in freefall. This theme echoes throughout the work but is perhaps most evocatively seen in the stunning pas de deux by Siobhan Lynch and Hugo Poulet. Poulet’s aloof poise belies his masterful skill at partnering, which enables seemingly effortless lifts and the impression that Lynch was defying gravity. On opening night, their pairing evoked the power of Yury Grigorovich’s Adagio of Spartacus and Phrygia and several audience members were visually moved to tears.

Elsewhere, in an extraordinary solo by Isaac Clark, the iconic gestures of Nijinsky’s seminal Afternoon of a Faungive way to beautiful leg extensions that show Clark’s incredible flexibility, strength and placement. Indeed, there are moments when Clark recalls the spritely physicality of a young Graeme Murphy – elfin one second, Machiavellian the next. 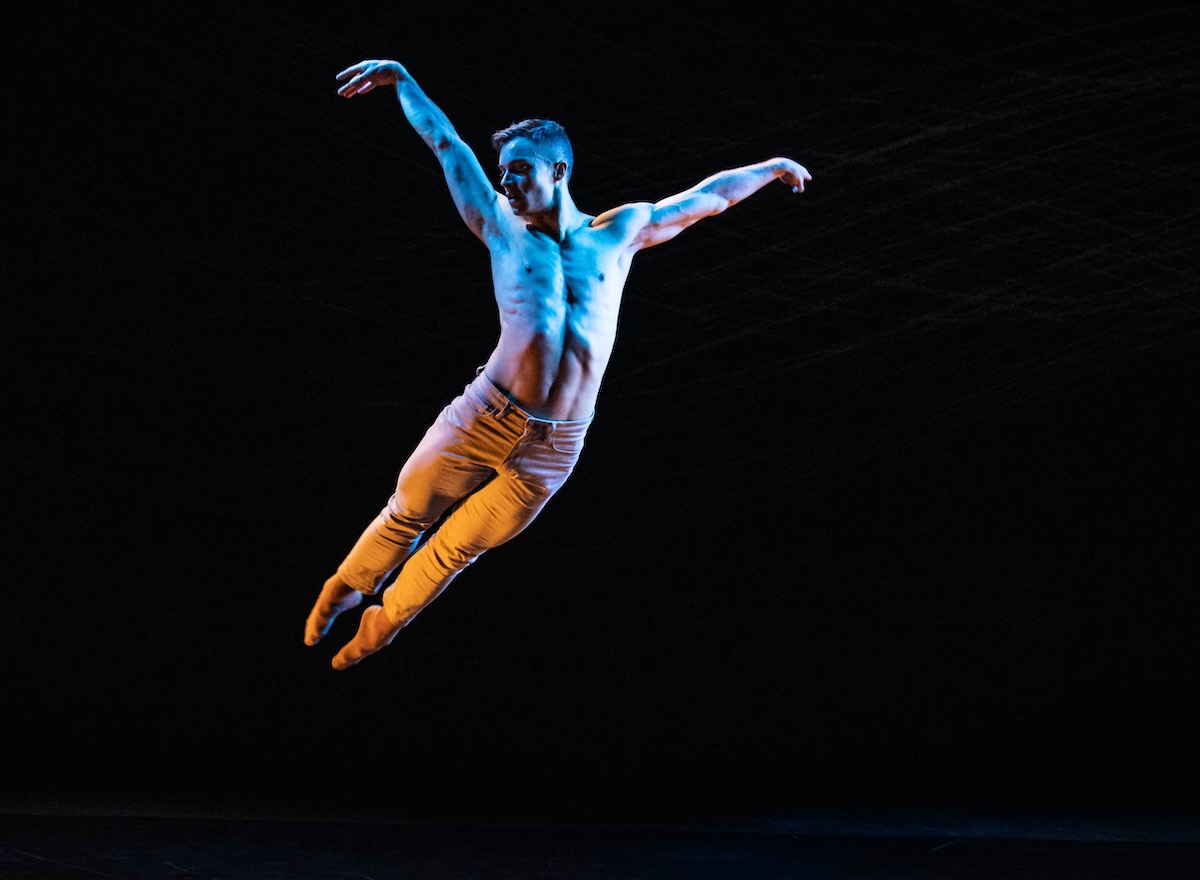 Through his choreography, Ventriglia succeeds in capturing Galileo’s fundamental principles and the stage is his laboratory. He initially brings the company on in a stylised form of running that almost seems to be in slow motion. Like rugby players entering a playing field, they are immediately at odds with Vivaldi’s music in the background. However, rather than subverting the classical form for the duration, their sinuous bodies quickly assume a balletic grace and beauty. At first disjointed, these transitions become increasingly seamless as the evening progresses – acknowledging trial and error as the elementary process in science that yields results.

At times, Galileo‘s ensemble choreography recalls the formations of Baroque court dances – the company dancing in a branle with couples breaking away in various dances deux, However, such formal constraints are fleeting as Ventriglia plays with Galileo’s law of inertia, whereby the dancers seem to move to their own impulse, until the force of another dancer’s body causes them to move in a different way. This was perhaps best demonstrated when they reclined on platform dollies and wheeled around the stage, their direction only impacted by the intervention of their partners. This routine highlights the incredible athleticism of the dancers who also include Sienna Bingham, Veronika Maritati, Caitlin Halmarick, Zachary Healy, Ginger Hobbs, Bridget McAllister, Connor McMahon and Ashlee Wilson.

Ventriglia also uses his dancers to bring to life Galileo’s atomic theory and has them come together in formation, as if in a single body. Each dancer represents one of the infinite particles within and quivers to the agile vocal stylings of Cecilia Bartoli, who features twice in the work’s musical selection. Other featured composers include Baroque masters Monteverdi, Giacomelli, Corelli and Pergolesi, alongside a more contemporary composition by Cannavacciuolo, which does not feel at all out of place in the course of the evening. 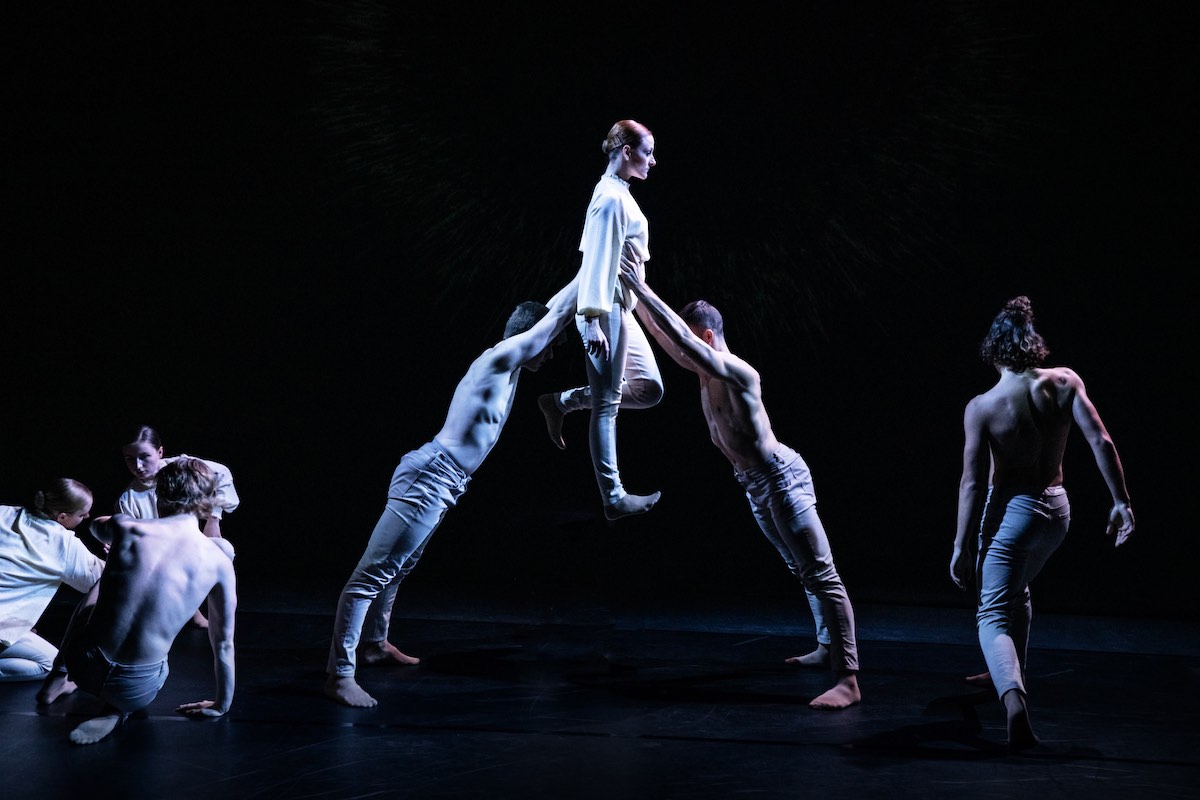 Visually, Ventriglia keeps it appropriately simple and has designed his own costumes on this occasion. The entire company wears jeans throughout, with the women in tunic tops and the men topless throughout. The work is sensitively lit by Roderick van Gender, while Marco Giani’s video designs seem to reinforce Galileo’s concept of vertical and horizontal motion, with criss-crossing lines that move across the backdrop. Nothing more is needed in this superb piece of choreography that relies solely on the brilliance of its dancers to succeed.

When Ventriglia and Managing Director Neil Christopher launched the Sydney Choreographic Ensemble last year with Grimm, it seemed a brave step to take in a world of such uncertainty. One year on, Galileo proves they not only have the talent to survive, but to thrive as well. This work may be small in scale, but it is a masterpiece that manages to do justice to the father of modern science. It deserves a wider audience and bodes well for the future of independent, modern ballet in this country.