The 2020 Mustang GT500 is, to borrow a phrase from sports, goat AF. Augean horsepower, wheels stickier than a student loan, track times measured in lux, and a cooling system rivaling the end-Devonian extinction.

Believe it or not, the 1967 GT500 could have been described in the same words. Carroll Shelby said himself of the debut model, “This is the first car I’m really proud of.” Its race-derived 7.0-liter engine wowed critics. It was the fastest car to ever lap the Ford test track at the time.

Even though the new model reaps fifty years of performance advances, most fans would have a hard time deciding between the new GT500 and the first one. So, though it may seem crazier than a demented orange elephant with a twitter account, we decided to compare the two.

And for the record, Ford has used various spellings of “GT500” over the years. For the sake of simplicity, we’re using the latest. 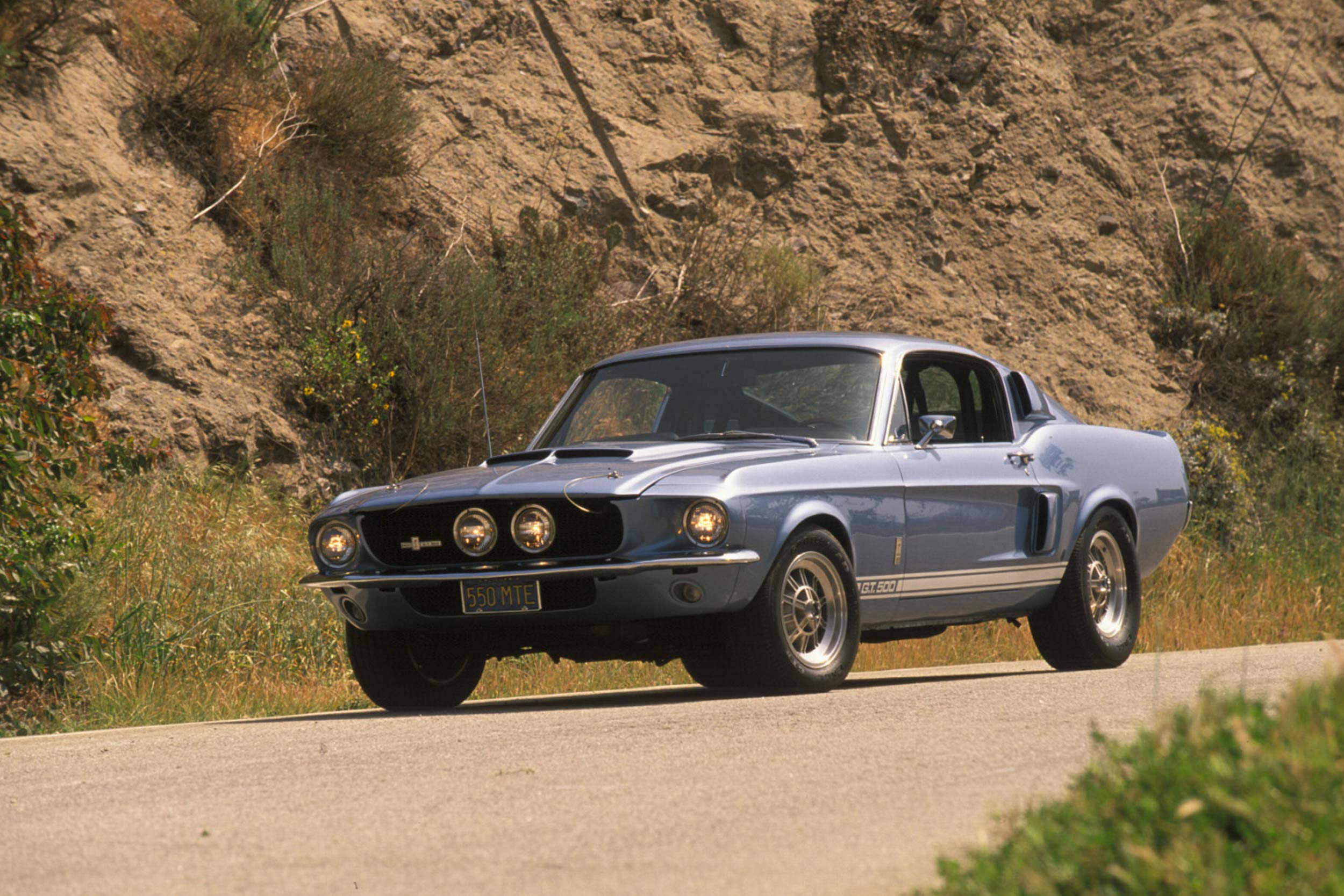 After the success of the GT350 in 1965 and 1966, Carroll Shelby devised the GT500 for 1967. The fastback Mustang variant was built around Ford’s big block V8 and had features designed for track day domination. A padded roll bar was standard kit and was designed to meet competition requirements. In place of the normal Mustang louvers on the buttresses behind the side windows, a racing-style scoop accelerated air over a vent, creating a pressure differential that pulled out cabin air for improved ventilation.

Up front, the revised nose was longer and used a fiberglass hood with functional scoops. Gone was the chrome grille insert, replaced by rally-style twin headlights and a scoop below the bumper for improved airflow.

A ducktail out back completed the look, achieved with a fiberglass tailgate and special fender caps. Two wide taillights replaced the triple units seen in lesser Mustangs. 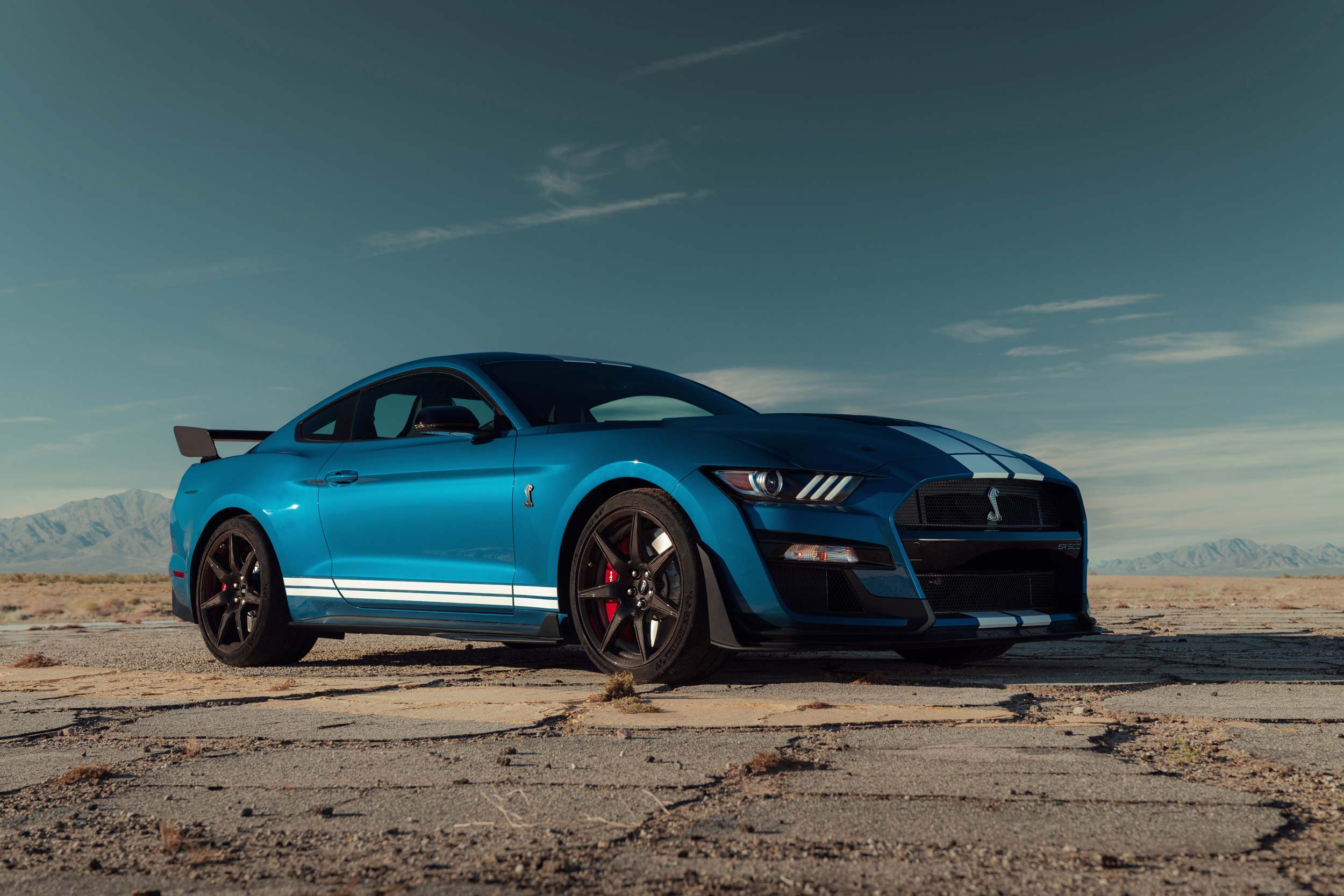 The 2020 Mustang Shelby GT500 debuted at this year’s Detroit Auto Show in a thunderous cloud of Sturm und Drang. The Most Powerful Ford Ever Built (well, street-legal) has more than 700 horsepower under the hood, and boasts the hyperbolic performance numbers we’ve become addicted to in the Platinum Age of Horsepower Wars: zero-60 in the mid-threes and the quarter mile in the sub-elevens.

Brakes are yards across and feature 30 percent more thermal mass up front that in the GT350. The latest active suspension translates to the highest-ever lateral acceleration from a Mustang. Shifts are accomplished at speeds that would make the Big Bang blush.

How fast it will go all in is the subject of much speculation, and we cannot wait to find out. 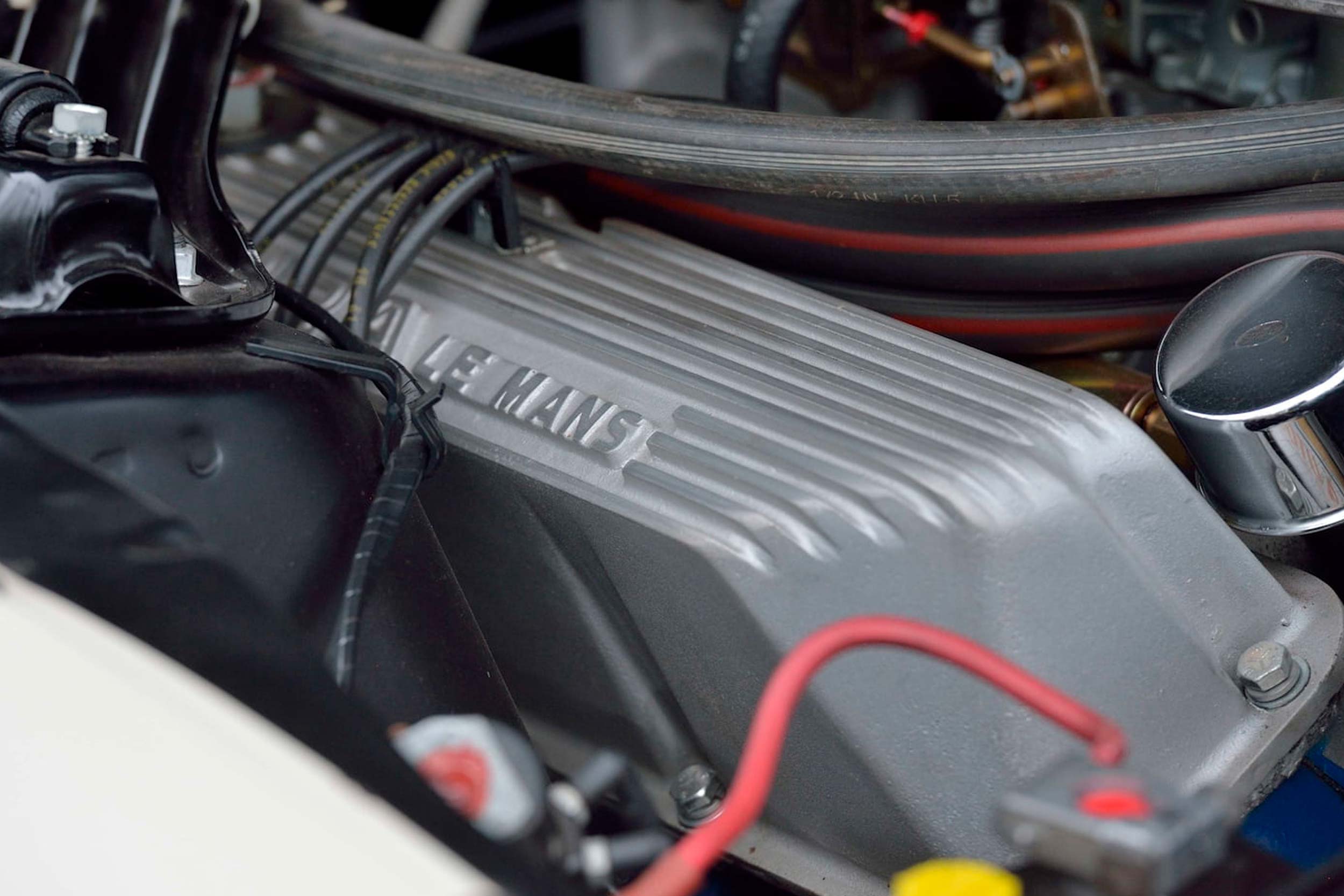 Powering the first Shelby GT500 was a thundering 428-cubic-inch “LeMans” V8 (7.0 liters). It was based on Carroll Shelby’s 427-cid engines that swept Ferrari off the podium at the race of the same name.

In the ’67 Mustang, the FE-series block developed 355 horsepower and 420 lb-ft of torque using dual four-barrel carburetors and a high-riser intake manifold. A high-revving camshaft boosted the rev limit to 6,000 rpm.

Total curb weight full of fuel, oil, and water was 3,286 pounds. Combined with the singular bellow of the 428, acceleration was intoxicating. 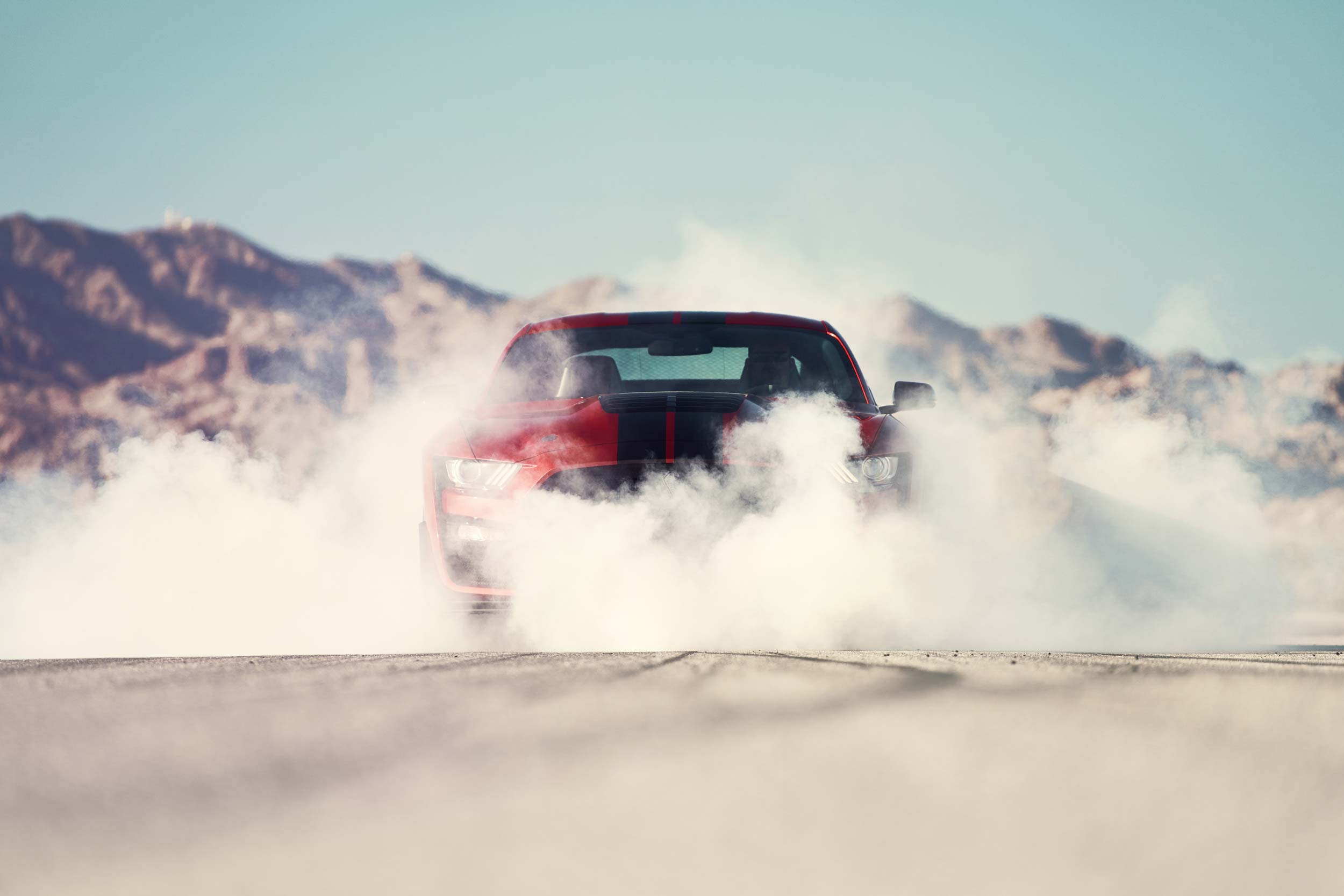 The big story for the 2020 GT500 is, of course, the 700+ horsepower under the hood. The hand-built engine shares the same aluminum block, bore and stroke as the GT350. Structure is added to the block and head, a cross-plane crank installed, and unique twin overhead cams. Oil capacity is improved, and, just for fun, a 2.65-liter Eaton supercharger bolted on top. The roots-type compressor saves packaging space with an inverted design that puts the charged air output at the top. An air-to-liquid intercooler tucks neatly in the valley between the cylinder banks. 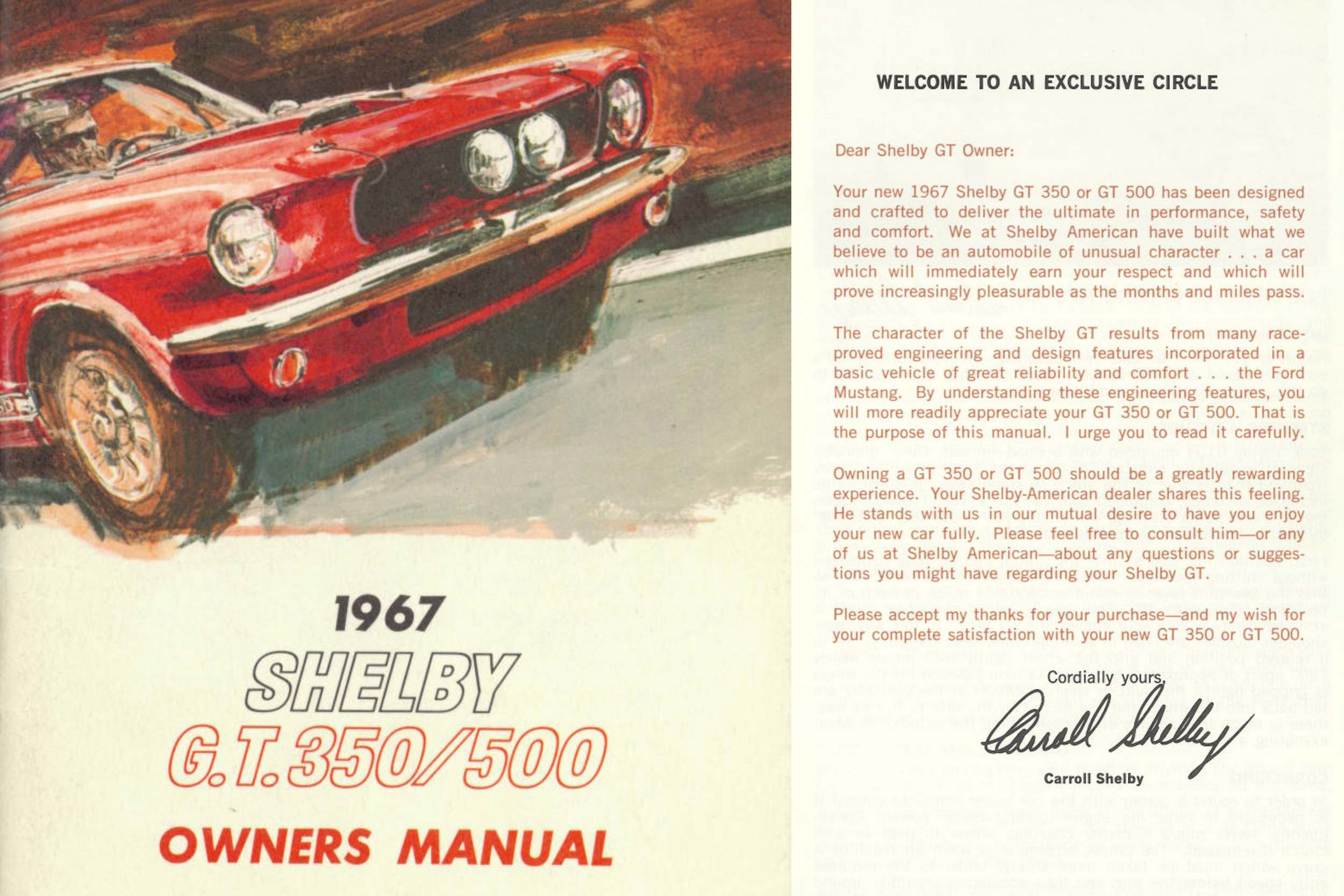 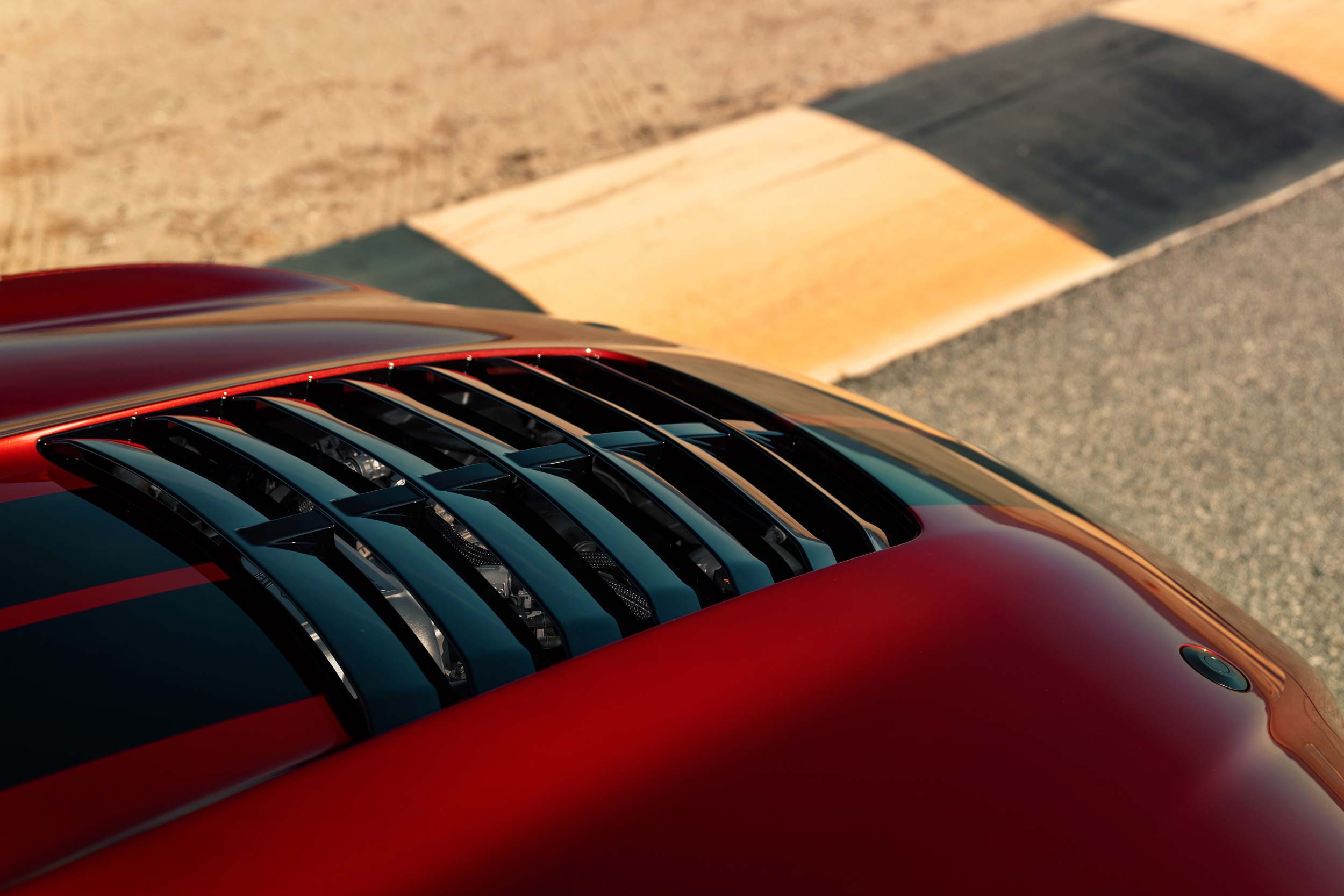 Preventing a meltdown under the hood of the 2020 GT500 is the job of six heat exchangers packed behind a front fascia with an opening area twice as big as in Shelby GT350. Dual hot side thermostats are used to increase engine cooling capacity under extreme conditions, like track days.

Underneath, an 11-quart cast aluminum oil pan is mounted to both the block and transmission for added strength and reduced vibration. Baffles inside direct oil to the sump during hard cornering, braking, and acceleration. 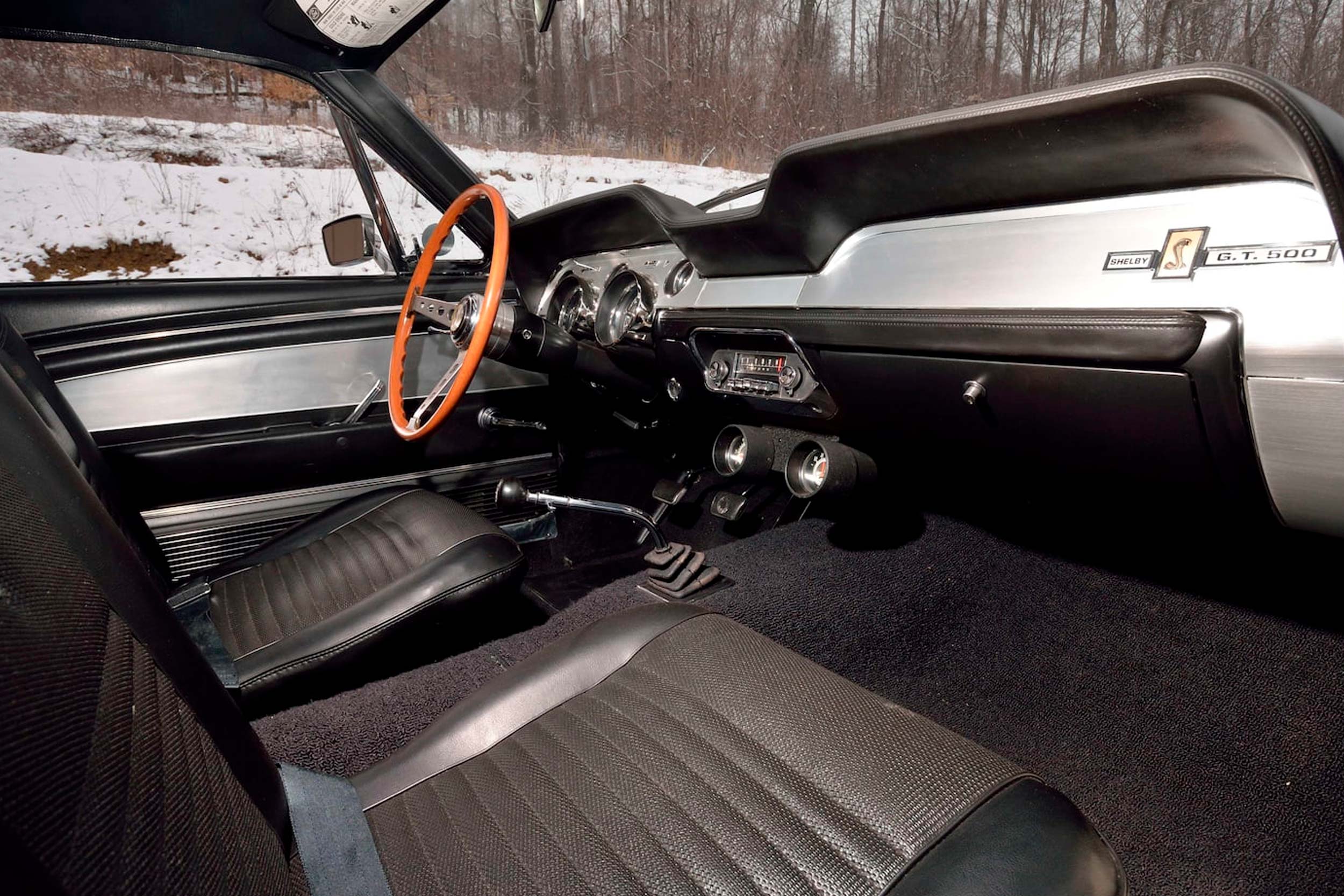 There were two gearboxes available for 1967. The biggest thrill came from the 31-spline four-speed manual (also used in the Fairlane GTA). Acres of clutch plates [131 sq. in., actually—Ed.] provided plenty of bite to connect the 7.0-liter plant to the rear wheels, and close ratios kept it in the power band. Top gear was 1:1.

Delightfully, the owner’s manual that came with the car provides instructions for double clutching.

Should buyers have been so inclined, a heavy-duty C6 Cruise-O-Matic could be specified. The unit featured both fully automatic operation and manual gear holding. Three forward speeds were available, with the top again being 1:1. 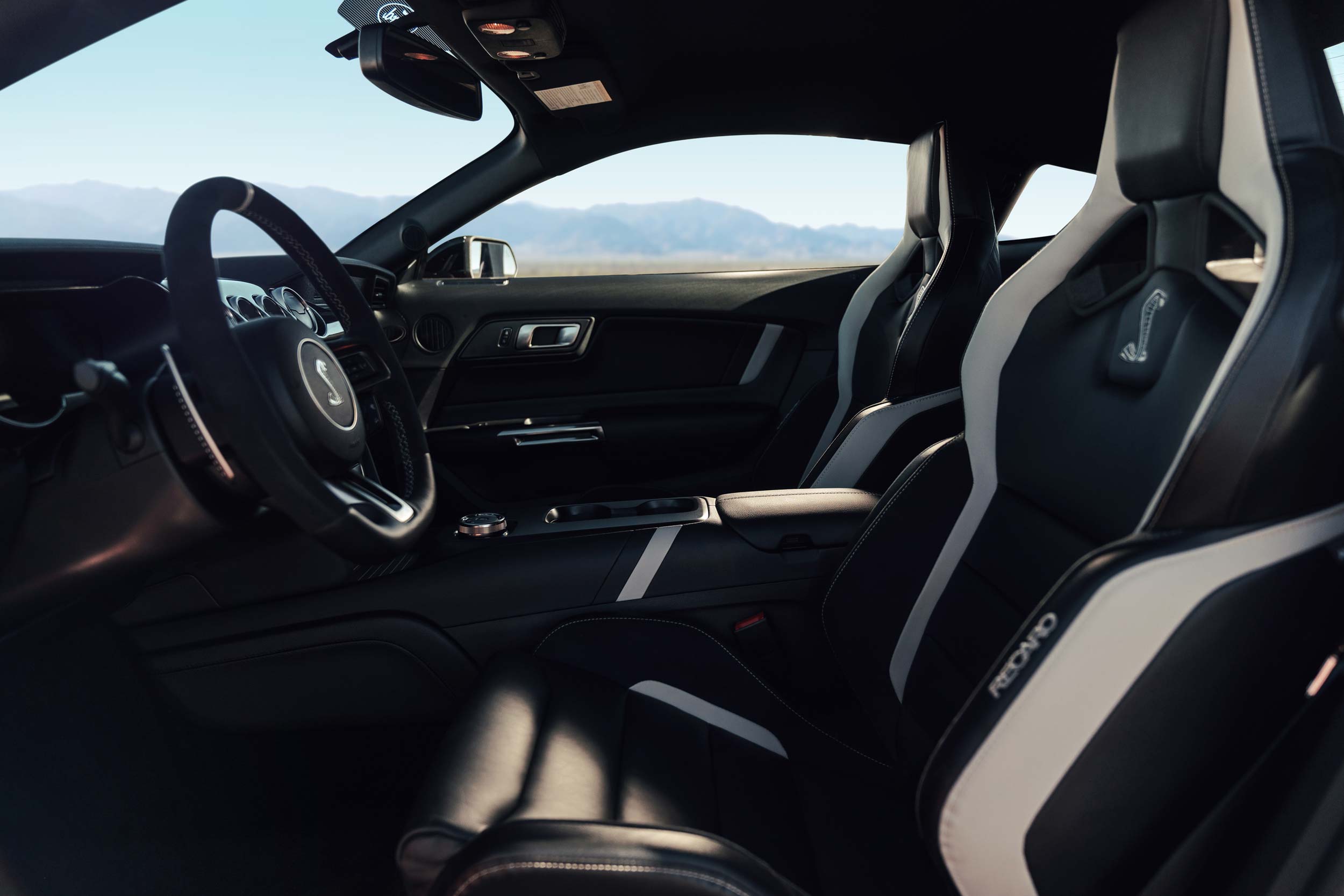 Transferring the gobs of power to the road is the duty of a TREMEC 7-speed dual-clutch transmission. The computer-controlled unit bangs out shifts in under one-tenth of a second, far faster than a manual box.

Like most high-performance vehicles these days, a manual transmission is not currently on the spec sheet. 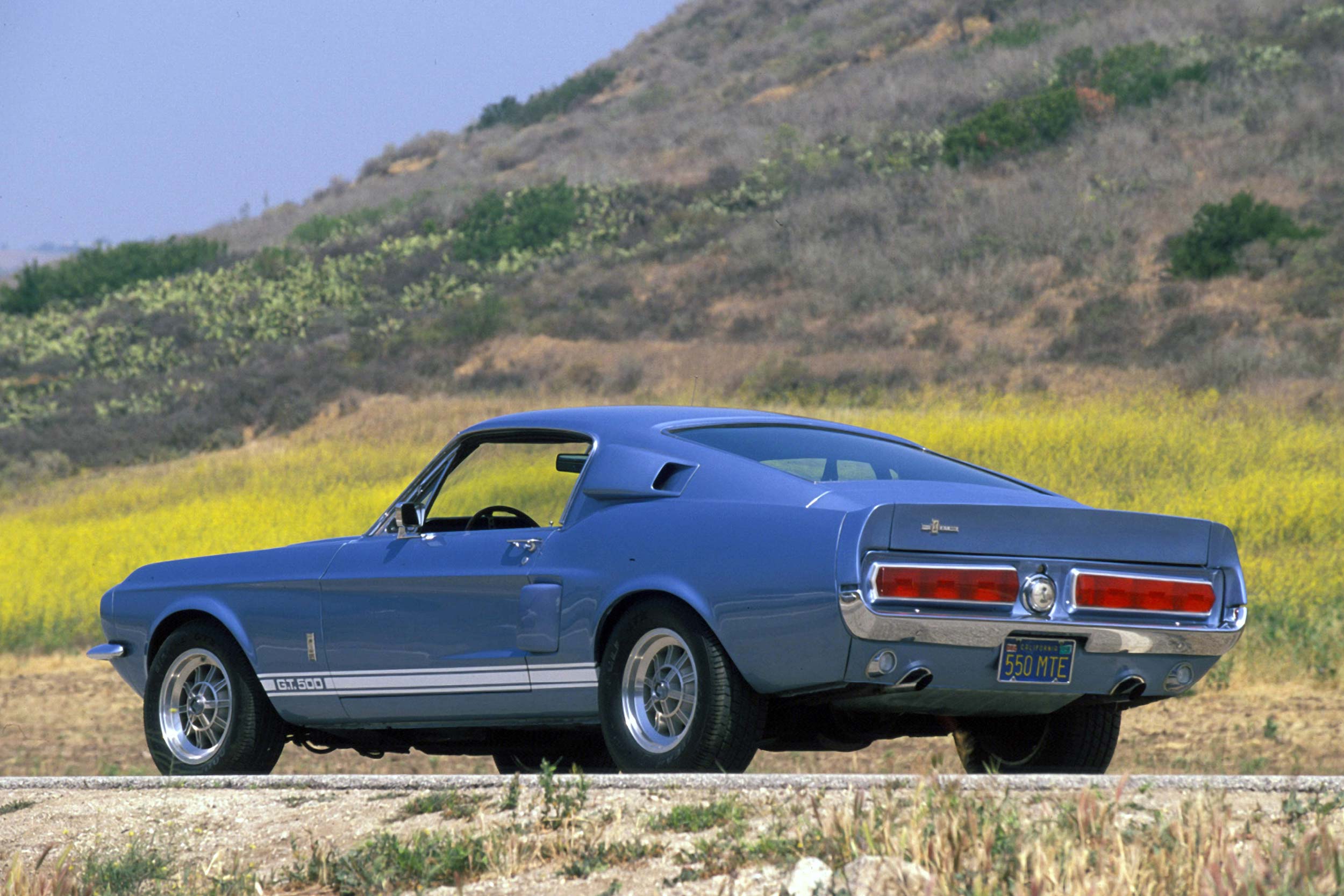 The ’67 GT500 had revised suspension compared to the Mustang for crisper handling and quicker response. The roll center was raised slightly and had the counterintuitive effect of resisting roll. Stiffer roll bars were used up front, from .840 to .940 inch.

Relatively low spring rates were used, combined with heavy-duty adjustable shock absorbers. An optional Monte Carlo bar (which is what we’re calling them from now on) reinforced the front shock towers.

Like all good classic Mustangs, the GT500 had a solid rear axle with a final drive of 3.50:1 with a manual and 3.25:1 with the automatic. A “No-Spin” differential was on the options list. 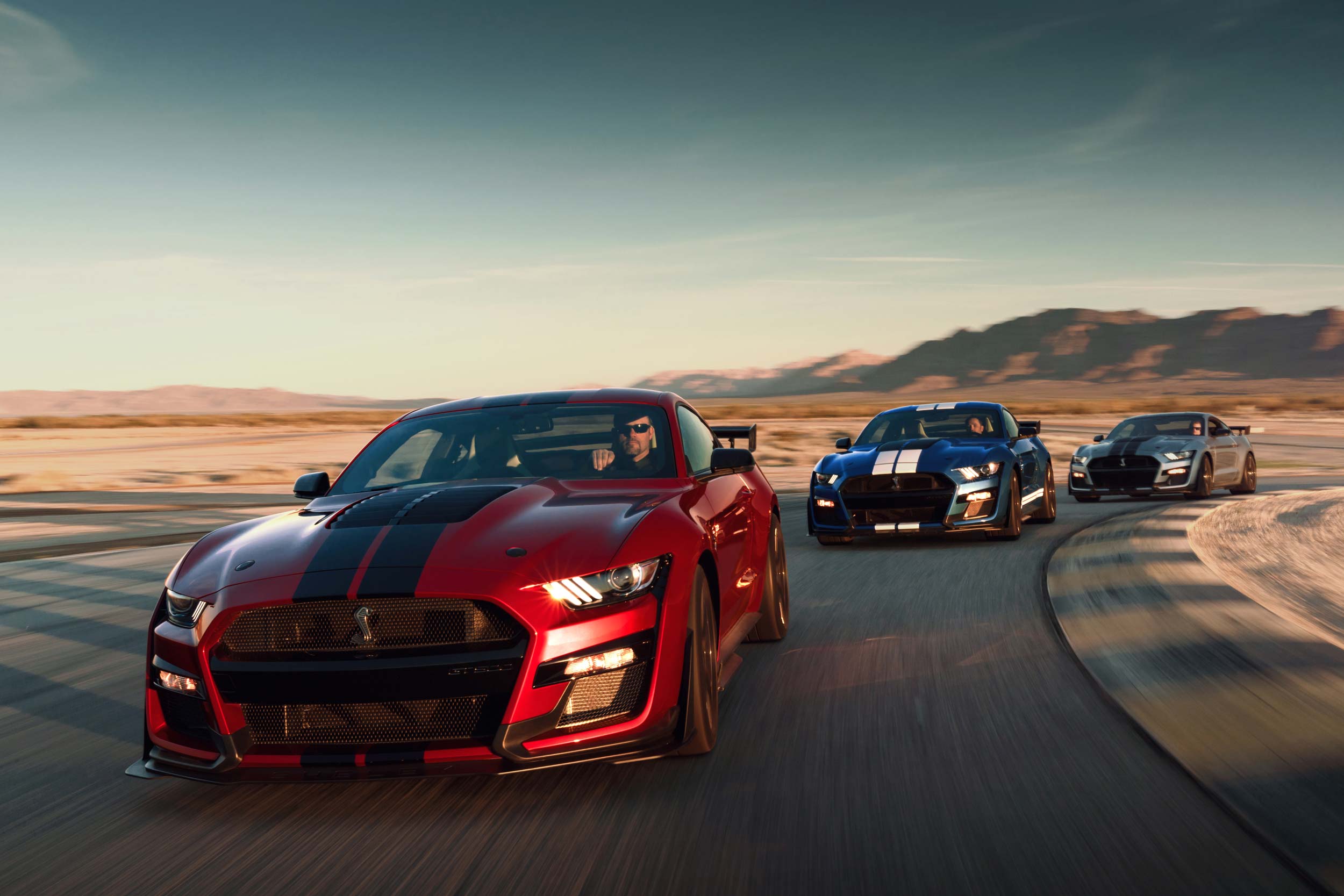 There are new locating links front and rear and lighter high-strength steel springs. A structural brace is made from lightweight magnesium so it will remain stiff in extreme heat. A new strut tower brace provides gas shock mounting point for the hood.

Drivers wishing to explore the outer edges of the GT500 can opt for adjustable front camber plates with bushings tuned to reduce the harshness and noise normally seen in performance plates. 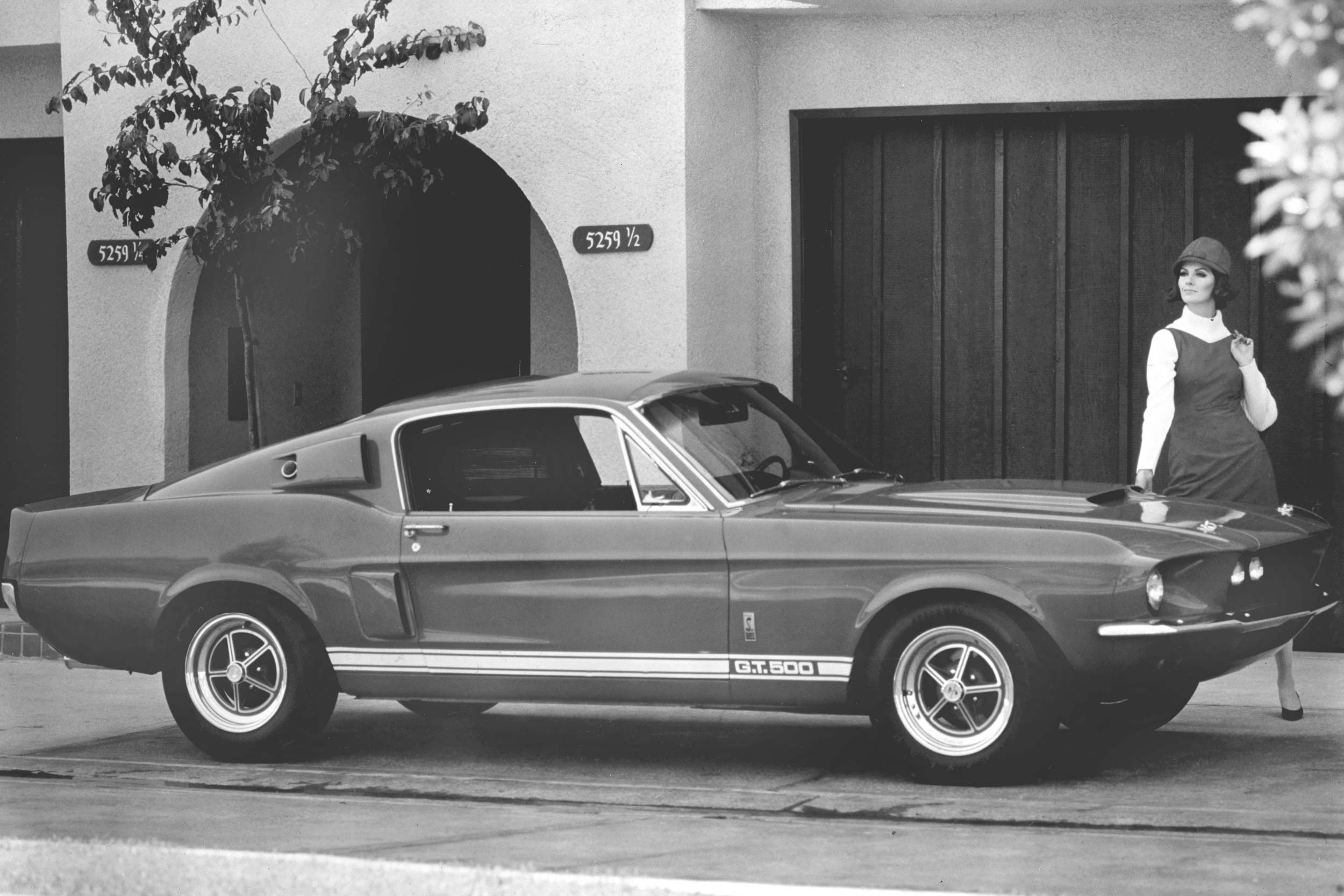 Front discs used 11.3-inch rotors with internal ribs for quick cooling. A special heavy-duty lining was used for improved wear. Out back, 10-inch drums were 2.5 inches wide and cooled by custom intakes on the sides of the car.

Shelby boasted this combo would stop shorter and straighter than conventional systems and was practically fade free. 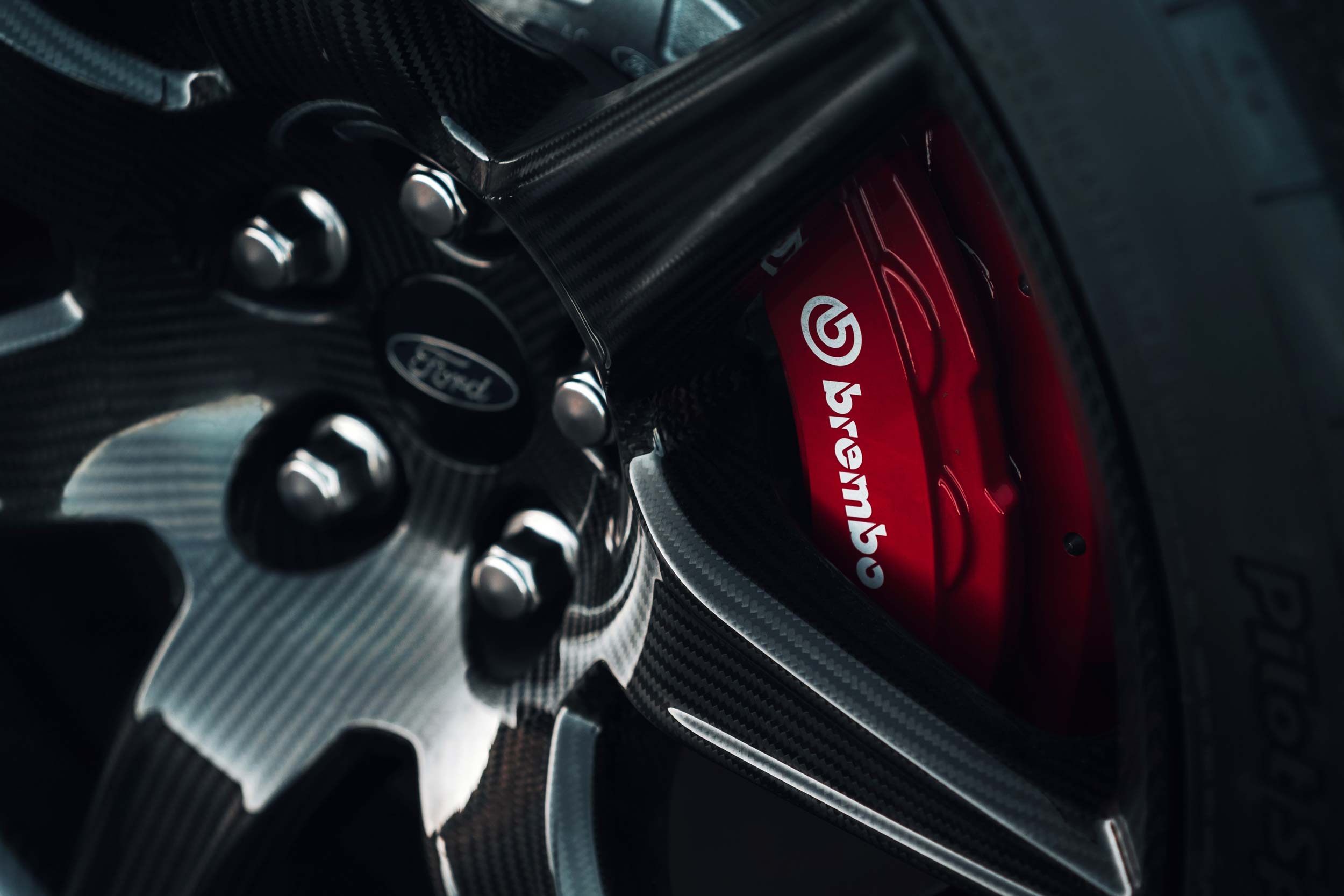 The front brakes of the 2020 GT500 are bigger than the wheels of the ’67 model. Two-piece SHW rotors are a Texan 16.53 inches in diameter and paired with Brembo six-piston fixed calipers. Total swept area is 147.5 inches, a 20 percent increase over the Shelby GT350.

The vented 1.73-inch cast iron rotors ride on floating-pin aluminum hubs and will sink up to 30 percent more heat in the front corners for extended durability

Out back, two-piece vented SHW rotors are 14.56 inches and also use Brembo fixed calipers. Again, the swept area is increased 20 percent over the Shelby GT350. 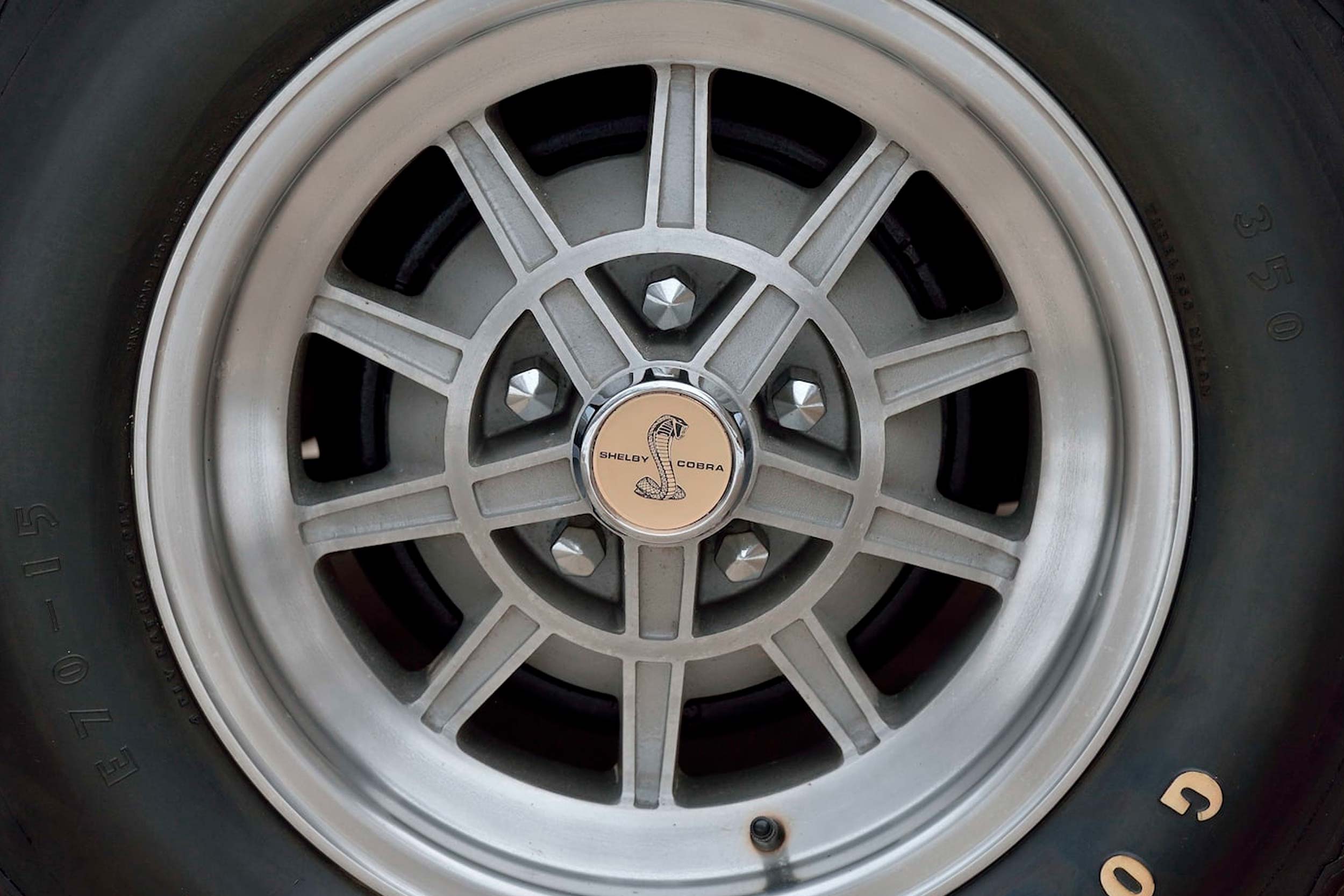 The cutting edge tire technology of the late sixties dictated that only Goodyear “Speedway 350” low profile tires would do for the GT 500. They were mounted on 15-inch chromed steel with a special alloy center spider and 6.5-inch rim width. Custom wheels with a seven-inch width could be ordered. 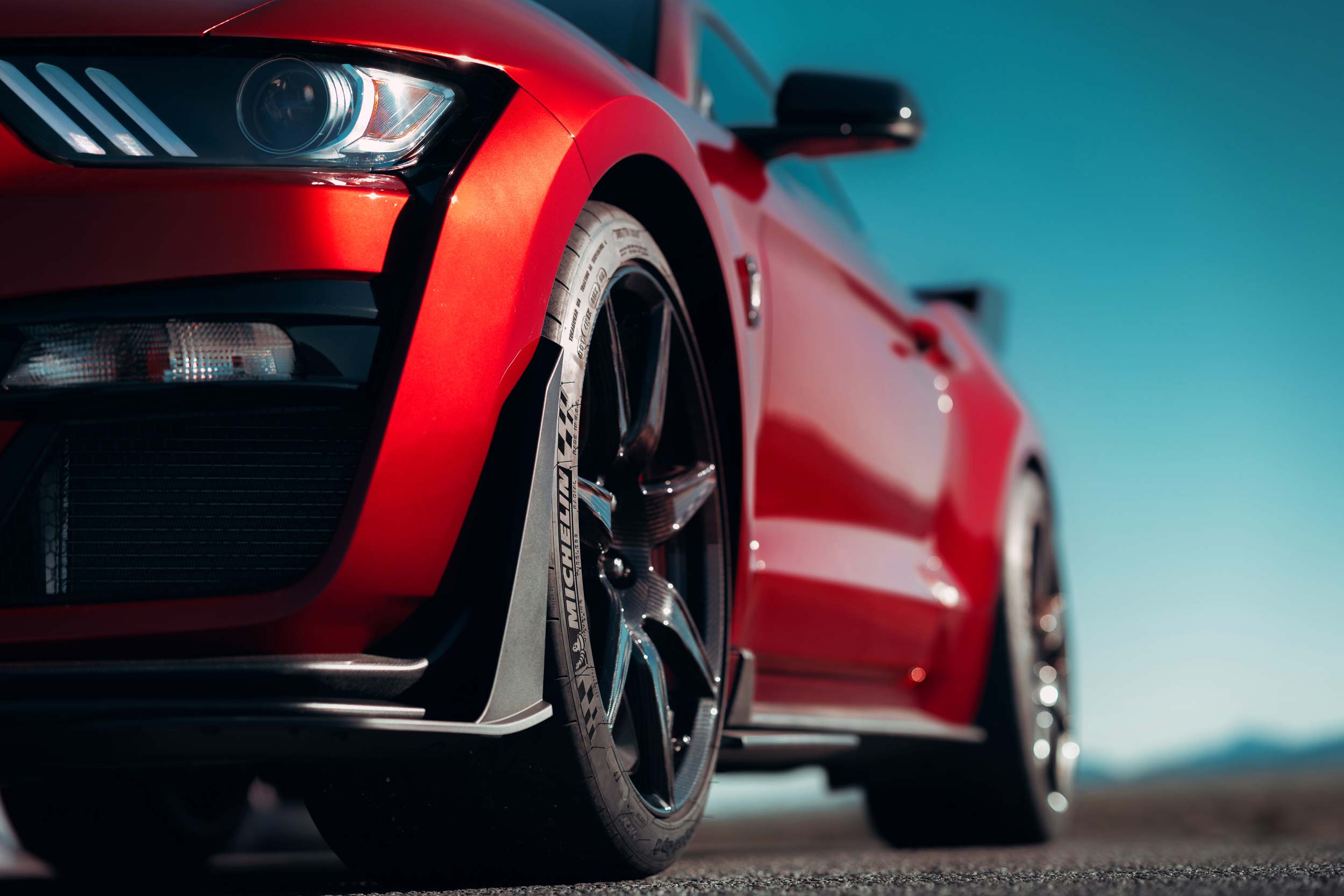 To keep more than 700 horsepower attached to the ground, Ford has specified Michelin Pilots with tread designs and compounds unique to the GT500, in two performance levels.

Base models are equipped with 295-305/30ZR20 Pilot Sport 4S running on 20×11-inch aluminum alloys front and rear. The wheels are flow-formed and forged for added strength and reduced weight.

Models equipped with the hi-po Carbon Fiber Track Package use staggered carbon fiber wheels, 20×11 up front and 20×11.5 in the rear. The all-new design reduces unsprung weight and reduces noise, vibration, and harshness. The wheels are width-matched to the sidewall and contact patch on the 305-315/30ZR20 Pilot Sport Cup 2 tires.