Is stress a friend or foe? Most people believe that stress can harm health, increase the risk of cardiovascular diseases, cancers and other chronic diseases, and even shorten life expectancy. However, an important study has shattered this view.

Thirty-five percent and 20 percent of participants said that they experienced moderate or high levels of stress, respectively. Twenty-six percent and 8 percent said that stress affected their health to some or a great extent over the same period of time.

The time span of the study was eight years. After the cutoff date, the researchers looked for these participants in a database of deaths in the US population to see who had passed away. As it turned out, 2,960 of them passed away before the cutoff date.

The researchers found a surprising phenomenon.

The risk of premature death increased by 43 percent for people who thought they were stressed and believed that stress was damaging their health to a great extent.

However, people who experienced the same amount of stress, but did not consider it damaging to their health, were not affected.

In fact, their mortality rate was even lower than those who experienced the least amount of stress.

In reality, a person’s attitude toward stress is what really determines whether or not stress is harmful to their body.

How Your Attitude Towards Stress Affects Cardiovascular Changes

Furthermore, your perception of stress will affect the changes in your body.

Researchers at Harvard University recruited 50 volunteers to participate in a test. The volunteers were healthy, with an average age of 22 years old, and equally divided by gender.

The volunteers were then asked to give a five-minute video presentation in front of two judges. During this process, the judges gave non-verbal negative feedback to the speakers, such as frowning and crossing their arms. The volunteers were then asked to do five minutes of mental math by counting backwards in units of seven from 996. During this process, the judges also made various expressions of dissatisfaction to weaken the attention of the subjects.

The sensors on the volunteers’ bodies recorded their cardiovascular responses.

It is important to understand that many people under such stress not only feel uncomfortable, but also have constricted blood vessels and poor blood circulation.

However, the results showed that compared to the control group, the first group of participants, who were told that stress was good for the body, had significantly higher heart efficiency, and their hearts could pump more blood per minute. Moreover, their blood vessels were significantly less constricted and less resistant to blood flow.

In addition, a positive attitude toward stress and stress resistance can both affect your DNA.

Aging and risk of cancer are both related to DNA, which is a chain made of two double helix structures. When a cell divides, the two strands of DNA unwind, and each strand forms an identical copy of itself.

At the ends of the DNA molecules, there are protective caps called telomeres that prevent DNA from being copied incorrectly and causing problems such as cancer. Telomeres are like aligned beads. Each time a cell divides, the next generation of cells loses a few beads. Unfortunately, each cell has a fixed number of beads, which means that a cell can only replicate a certain number of times before the protective caps are eroded. This number of cell divisions is known as the “Hayflick Limit.”

This means that every time a cell divides, the telomeres become shorter and the cell “ages.” Once a cell reaches its limit (most cells divide up to 60 times), it dies quietly. This is the nature of aging.

The human body, however, has its own mechanism for reversal.

We also have a substance in our body called telomerase. It adds “beads” to the telomeres of immune cells and some other cells, thus preserving all their telomeres.

When a person is under too much stress, telomerase does not work effectively, and telomeres shrink. As a result, the person ages prematurely.

However, when a person has strong stress resistance, telomerase activity increases, and telomeres lengthen. At this point, aging can be reversed, and disease can be prevented. 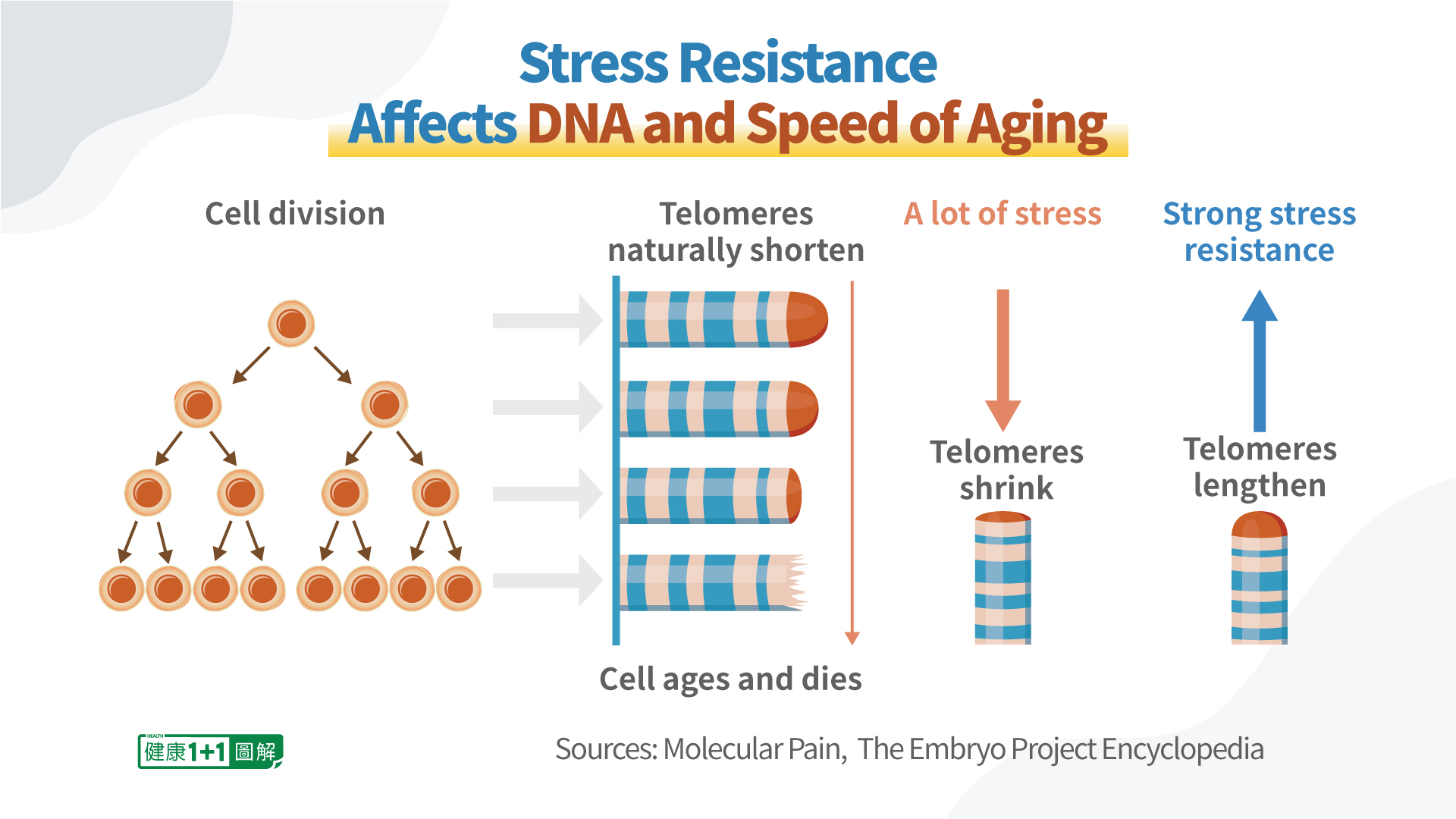 3 Ways to Improve Stress Resistance and Change Aging and Diseases

Despite this, every time stress comes, many people still feel pain and trouble: their blood vessels constrict, blood pressure rises, and telomeres in their body may also accelerate their shortening. So, how can we change our mindset in the face of stress and reverse this series of changes?

In fact, not all types of stress are bad. Psychology originally divided stress into positive stress (eustress) and negative stress (distress).

Negative stress is the stress that affects you negatively, such as looming ultimatums and that which leads to illness. Positive stress, on the other hand, is the pressure that gives you motivation to make beneficial changes.

In reality, many negative stressors can be turned into positive stressors. For example, when you see a deadline as motivation to reach your goals, you may become energized. There are also people who have had the misfortune of having cancer, but they have taken it as a reminder from God to change their lifestyles, and as a result, they have been leading healthier lives after cancer. Dr. Bor-cheng Han, a professor in the Department of Public Health at Taipei Medical University once suffered from liver cancer and had two thirds of his liver removed. However, he saw the cancer as an opportunity to change himself by eliminating negative thinking, learning to relax and adjusting his diet. Twelve years later, he hadn’t had another cancer recurrence, and he is even healthier than before.

Instead of equating stress with pain, we should see it as a friend and catalyst on our journey of growth. Since we can’t avoid all the stress, we should face it and live positively.

There is much evidence that treating stress as a beneficial thing can help increase resilience to stress and even increase the sense of bliss.

Researchers have found that athletes with a positive mindset are more likely to see stress as a challenge, which makes them mentally healthier and more energetic than average.

Studies in the United States and Australia have shown that people who believe that stress increases productivity are mentally healthy and have higher productivity and better academic performance than average.

Socializing and seeking help and social support from family and friends when appropriate can go a long way toward reducing feelings of stress and minimizing psychological and physical harm.

A new study by Australian researchers was published in the May 2022 issue of the Journal of Psychiatric Research.

They recruited 40 paramedicine students. During their work, these students were exposed to many stressful events. The researchers analyzed the DNA in their saliva samples before and after their exposure to stressful events and asked them to fill out questionnaires to learn about their lifestyles and health status at two time points.

The results showed that the group of students with high levels of social support and the group with a strong sense of belonging to a group, organization or community were better able to cope with stress, and that stress had fewer negative effects on their health than others .

These two groups of medical students also had fewer apparent genetic changes due to stress than the other participants.

Sitting in meditation can also help you change your mindset about stress and reduce its impact on your body.

In June 2018, 12 boys and the coach of the Wild Boars soccer team in Thailand were trapped in a cave for 18 days. Under extreme stress with little oxygen and no food, Ekapol Chantapong, the soccer coach who had been a monk for 10 years, taught the boys to meditate to calm their emotions and slow down their metabolism. Finally, after 18 days, the entire group was rescued.

Sitting in meditation usually requires one to calm the mind, without thinking about anything, remove all kinds of distractions, and actively dismiss negative emotions, stress and anxiety from the mind. 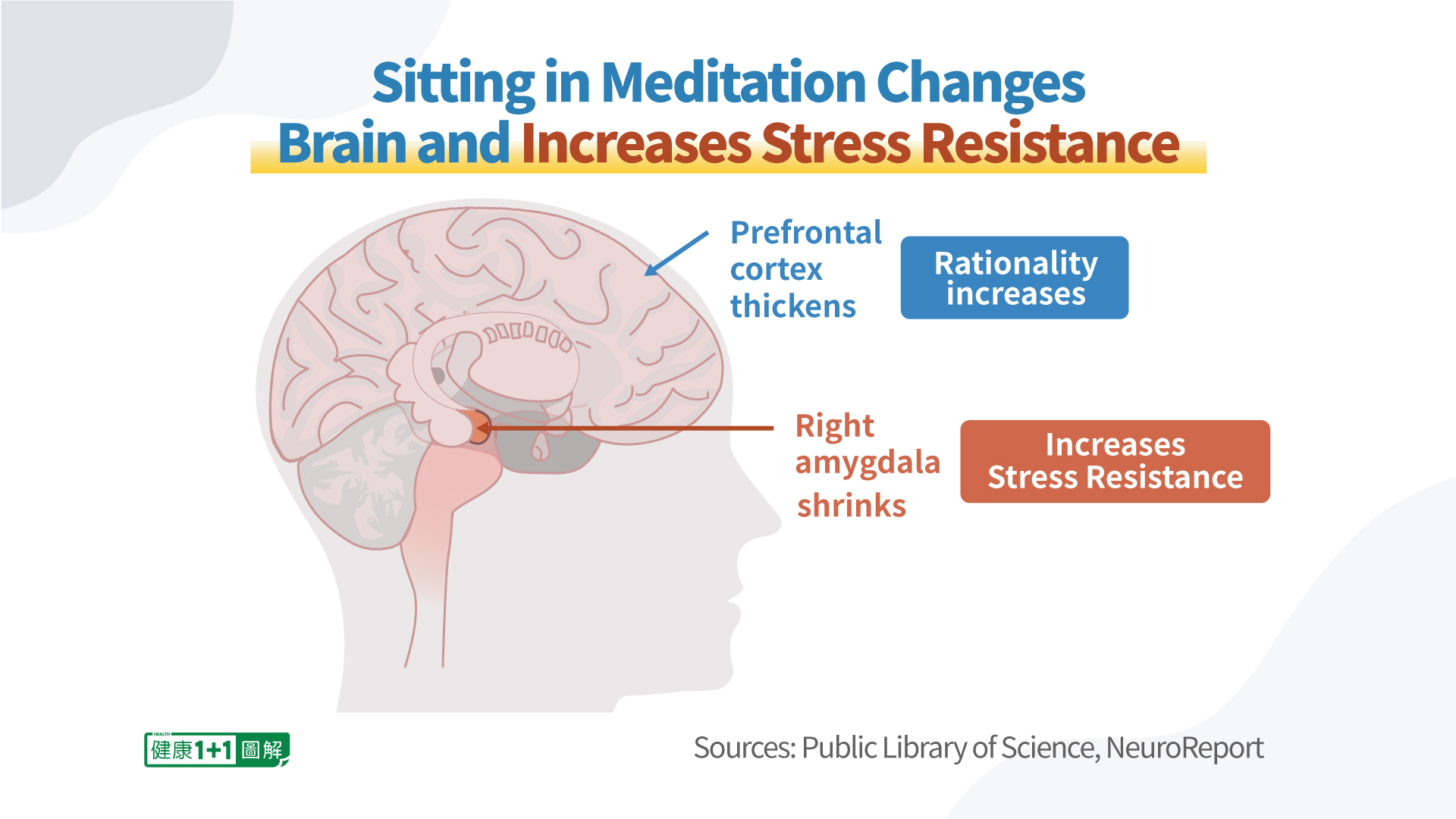 Modern science has discovered that meditation can reduce the size of the right amygdala of the brain, which is associated with stress control, and thus may reduce the body’s response to stress. Meditation, on the other hand, thickens the prefrontal cortex, the area of ​​the brain where rational thought takes place. This means that when one sits in meditation regularly, he/she is more likely to think rationally and less likely to be affected by stress. With such regular daily training, people will become increasingly positive.

A study jointly conducted by Coventry University in the UK and Radboud University in the Netherlands found that mind-body interventions (MBI), such as meditation, yoga, and Tai Chi not only make people relax, but also reverse the molecular responses in the body’s DNA that cause depression and an unhealthy state. The physical changes brought by meditation are the opposite of those caused by chronic stress.

Dr. George Slavich, a psychoneuroimmunology expert and psychiatrist at the University of California, Los Angeles, and Dr. David Black, a preventive medicine expert at the University of Southern California, jointly performed a comprehensive review of randomized controlled trials conducted by scientists over the past 20 years. They concluded that the length of telomeres was longer after meditation than those in people who did not meditate, and that meditation slowed the rate of cellular aging.