With Ulcerative Colitis part of the gut will become swollen, inflamed, and ulcerate causing weight loss, tiredness, and stomach pains (as well as other symptoms). This is a lifelong condition and can be unpredictable. Somebody suffering from the condition is likely to have periods of good health, which is known as remission, but can have times when their condition is active, known as flare-ups or relapses. Unfortunately, there is no cure for Colitis, but medicines and sometimes surgery can keep you feeling well for long periods of time. Crohn’s disease is a type of IBD which causes inflammation on the digestive tract and can lead to abdominal pain, fatigue, weight loss and malnutrition. Inflammation that is caused by Crohn’s disease can involve different areas of the digestive tract in different people.

IBD can affect anyone, two members of the British Judo Association, Janice and Sarah currently live with Inflammatory Bowel Disease. Whilst their experiences are different, judo has supported them both as they transfer from competitive judoka into coaching and mentoring.

What are your experiences with Inflammatory Bowel Disease

Janice (pictured left) was diagnosed with Ulcerative Colitis in 1989 at the age of 21, where she had approximately six months off competitive Judo. In hindsight, Janice’s diagnosis of Ulcerative Colitis ended her competitive judo career. Janice’s initial diagnosis and medication meant that she had several years where it was trial and error to find the best suited medication to control her UC, during which time she was hospitalised three times. Whilst in hospital during her second stay Janice was close to having her colon removed,”thankfully, I am very lucky and have not had any IBD surgery”. During her third stay in hospital, it was the beginning of Janice going into remission ,thankfully I currently enjoy and have regular check-ups”.

Sarah was aware of IBD before she was diagnosed as she had a family friend suffering with Inflammatory Bowel Disease however, Sarah was diagnosed in 2007 at the age of 30. Recently, Sarah has undergone an operation where she had her colon removed and now has a stoma bag. When having a stoma bag fitted it takes a while for the small intestine to start working. After the operation, Sarah had quite a high output and was producing three liters of fluid a day. It will take Sarah six months until she is fully recovered from her operation, however, she is due for another procedure later this year.

Being diagnosed with Inflammatory Bowel Disease could have a negative effect on their mental health, however, Janice mentioned that she “honestly didn’t feel at the time there was any ill effect” on her mental health, “I just kind of got on with it. Judo teaches resilience”.

When Sarah found out about her diagnosis her mental health was not affected initially, it felt like a relief knowing what was wrong. She questioned if she would ever be able to do judo again but after some time to reflect, realized that her judo will probably be better than ever after having the operation. However, over time medication was not effective.my symptoms became worse, and medication had stopped working, I became very frustrated, angry and upset”, It has been four weeks since Sarah had her operation, and she is feeling confident. She is not feeling as anxious about going about her daily routine “the stoma is giving me my life back and I don’t feel anxious about going out and worrying where the nearest toilet is”.

Janice had been a member of British Judo since 1977, starting when she was 8 years old and is now 54. She competed internationally from 1982 – 1992. The mentoring program with the British Judo Association has supported Janice throughout her Judo career. She joined the mentoring program as one of the inaugural mentors and decided to support the program having been a judoka herself. 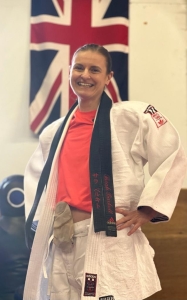 Judo has been a massive part of Sarah’s (pictured right) life since she started at the age of 3 in 1979. Sarah has always had a passion for judo saying “judo has always played a major part of my life”, Judo and IBD can be difficult “when IBD hits you, it can hit extremely hard”. Sarah also mentioned that there was no fear for her since having her operation, “I haven’t got the fear of having an accident or needing to find the nearest restroom”.

Mentoring program and how the British Judo Association provided support

When Janice retired from judo there was no system in place to transition from athlete to retirement however, she was provided with help, support and advice from her family, personal coach Dennis Penfold, Portsmouth Judo Club as well as the wider judo community. There was no structured programmed in place when I retired, “life was very different back then”, Janice joined the British Judo mentoring program as one of the inaugural mentors. The mentoring program is a valuable program for all to use,”planning for the future is definitely the way forwards.” She decided to support the program as she has previously been a judoka that had to transition several times in her own career. Saying she felt she could help others.

The mentoring programming with the British Judo Association has helped Sarah by providing a support group. Sarah was able to speak to someone who understands her condition and how it makes her feel.

Sarah’s full-time job is a coach at Paddock Wood Judo Club, a business that her father started around 43 years ago. Paddock Wood Judo Club provides judo in schools but also judo in her local community. Due to Sarah’s recent operation, she is unable to undertake tasks within her full-time role as a coach which has meant additional costs on the business for a coach to cover her until she is at 100% fitness again. Due to her operation Sarah is unsure when she will be able to return to the dojo and undertake her coaching responsibilities again: “don’t know if she will be back to the extent as what she was before, and this has probably hit a bit of a restart. I will go back to coaching and just see how my recovery is going”. However, Sarah has always had a passion for judo and cannot wait to be back on the mat.