A dwindling arsenal of active ingredients and increasing pressure from resistant grassweeds is forcing arable growers and contractors to reconsider mechanical methods of control.

Formerly the preserve of organic and specialist crop sectors, camera-guided weeders are becoming an increasingly attractive option for those looking to reduce reliance on chemicals.

These versatile tools come in modular formats, which mean they can be tailored to suit almost any crop planted in rows. For example, one machine can be adapted to hoe maize at 75cm, sugar beet at 50cm and cereals at 25cm, with some capable of going as narrow as 12.5cm.

Pin-sharp camera guidance systems work in tandem with a side-shifting mechanism to keep the weeders bang in line, allowing them to work to these tolerances without risking damaging the crop. Providing the conditions are right, they can trundle along at speeds of 12kph or more.

To show off their capabilities, Norfolk Agricultural Machinery Club (Normac) organized a demonstration event on a crop of maize provided by Raynham Farm Company, near Fakenham. This was drilled at a conventional 75cm spacing, and most manufacturers came armed with an 8eightrow/6m machine.

Monosem’s Multicrop hoe uses a single- or twin-camera guidance setup from Tillet and Hague, and is available in multiple configurations up to 18 rows over 9m, or 12 rows at 75cm spacings.

Monosem says it has given the Multicrop a tough construction to withstand heavy arable use, and it rides on large-diameter 350x120mm depth control wheels.

Each cultivation unit is supported on a long parallel linkage and has a simple T-bar depth adjuster that can be moved in 5mm increments.

The Multicrop comes with an integrated side-shift frame with four ground-engaging discs on the tractor side to help hold it stable. There is also an option to have a separate side-shift frame that can be used with other implements, which is the stock setup for the largest machines.

For the maize demo, UK importer Toucan Farm Machinery bought an eight-row, 6m machine with integrated side-shift frame and row units configured with five spring tines and rotating crop protectors. These stop soil being thrown over young crops, but they can be lifted out of crop when plants are more mature.

The machine was also fitted with sprung down-pressure adjustment and Isobus hydraulic section control that lifts each unit independently on angled headlands. It also had a distribution head for fertilizer application.

Prices vary considerably depending on specification, with the fully loaded model pictured coming in at about £80,000.

Hailing from Worcestershire, Edwards Farm Machinery both builds and imports machinery suitable for agricultural and horticultural use.

The Inter Row Cultivator is one of its in-house products, available in working widths of up to 12m and with the option of multiple row spacings, down to 12.5cm.

In standard form, it has an integrated side-shift frame built into the headstock, with a pair of discs used to stop the tractor side of the frame moving. However, it can also be had as a standalone hoe, teamed with one of its implement side-shift frames. 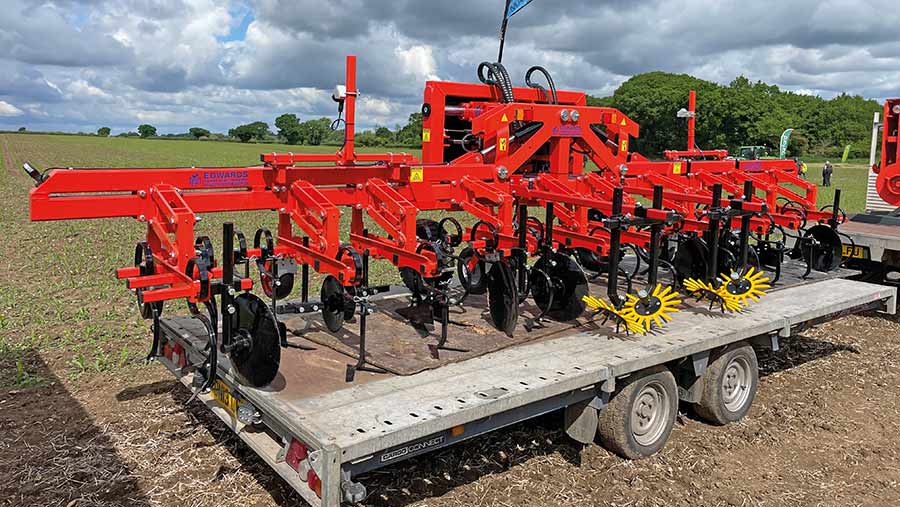 Each hoe unit mounts to the frame via a parallel linkage and comes in myriad configurations to suit different crops.

Multiple tine, leg and crop protector options are available, and the design makes it simple to swap these around and alter the spacing. Buyers can also add finger weeders to tease out weeds along the crop row.

Guidance is provided by a double Tillet and Hague camera system to ensure it remains accurate when working on angled headlands. An eight-row, 6m machine with hydraulic-folding frame costs about £33,000, including twin guidance cameras.

For more aggressive weeding, Edwards Farm Machinery offers an inter-row rotavator built by Comeb. It comes in working widths of up to 6m and the option of various tilling heads from 14cm to 76cm wide.

UK Importer Keith Rennie Machinery was demonstrating the Econet hoe from French firm Carre, which is available on various frames and can be configured with six to 18 rows.

Spacing can be adjusted by loosening a clamp and sliding the hoe units along the main beam, down to a minimum of 18cm. 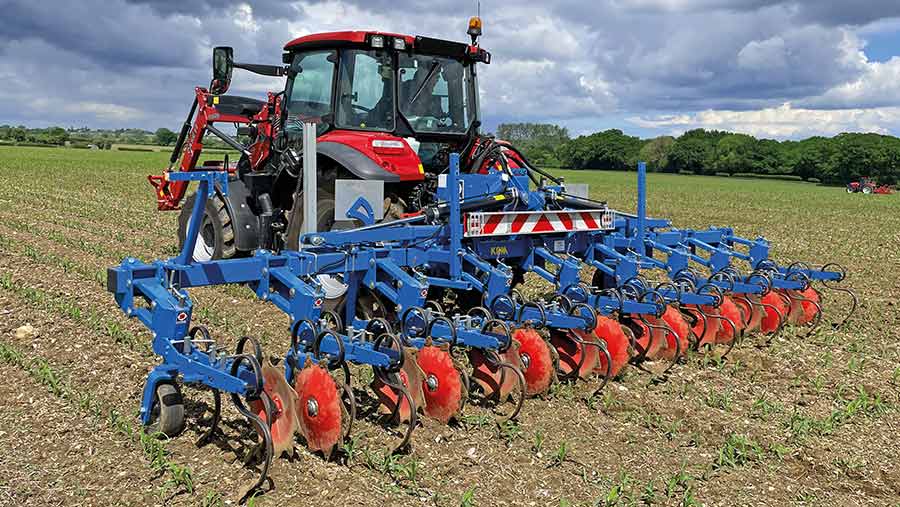 Pictured is the 6m mounted option with eight hoe units set at 75cm, each of which is mounted on a parallel linkage with a hand winder to adjust working depth.

This machine was configured with five spring tines and rotating crop guards that can be lifted out of work as the crop matures. However, Carre offers several configurations to suit different row widths and soil types.

Guidance is provided by a single or double version of Claas’ Culti Cam system, which runs through a touch-screen monitor. This triggers the integrated side-shift mechanism to pull the implement into line.

Horsch is a recent entrant to the mechanical weeding game, launching its Transformer VF camera-guided hoe in 2019. 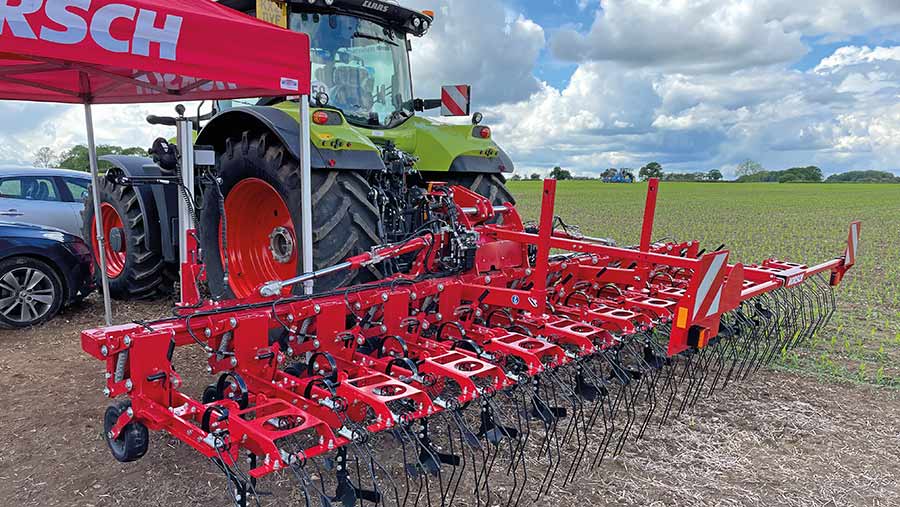 Each has an integrated side-shift mechanism controlled by a single or double Claas Culti Cam system, with discs on the tractor side to hold the frame in place. Different combinations of hoe units can be added to these, allowing a range of row spacings from 25 to 80cm.

Additional options include spring or hydraulic downforce to help keep the units in the ground and section control so the units lift and lower independently on the headlands.

The implement pictured sits on a 6m folding frame and is configured for hoeing between cereal crops established with a Horsch Avatar set on 25cm rows.

It’s also fitted with an optional rear following harrow that can be set to give a more even finish between the rows, or placed on the row to work between plants.

Steketee has been owned by Lemken since 2018 and its range of weeding equipment is now available to buy through the firm’s established dealer network.

The EC-Weeder is its camera-guided hoe, available in working widths of up to 17m and several row spacings down to a minimum of 15cm. 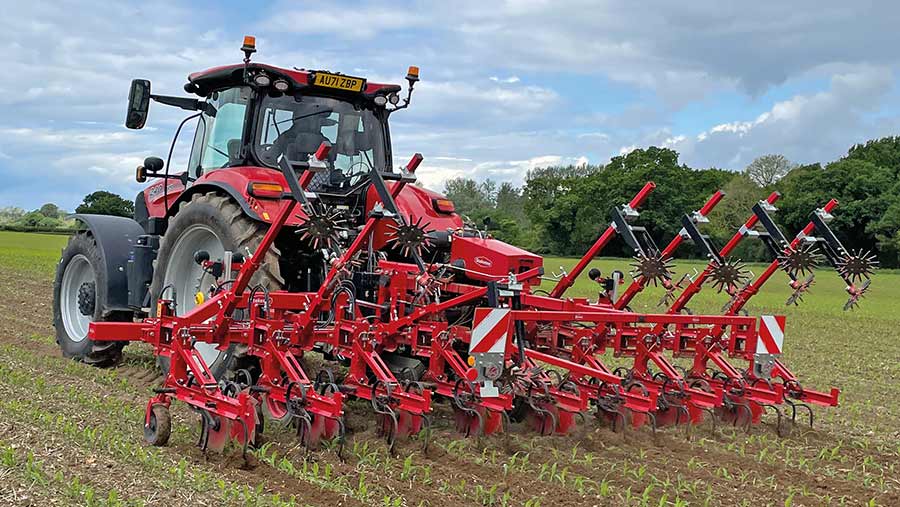 Unlike most other side-shift hoes, Steketee uses a horizontal linkage to move the implement from side to side, rather than sliding it along a bar. The firm says this means less force is required to move it into position, meaning the front portion of the frame can run on wheels, rather than ground-engaging discs.

This steering mechanism is also available as a separate unit, called the EC-Steer, which has a three-point linkage to which conventional hoes can be attached.

Guidance is provided by Steketee’s own IC-Light camera system, which recognizes the crop from its color and guides the hoe to within 2cm of it, even when working at speeds of up to 15kph.

Garford has been building camera-guided hoes fitted with Tillet and Hague camera guidance for more than 20 years.

It has options for weeding between rows of crop and between plants along the row, although the latter can only really be justified for high-value crops. 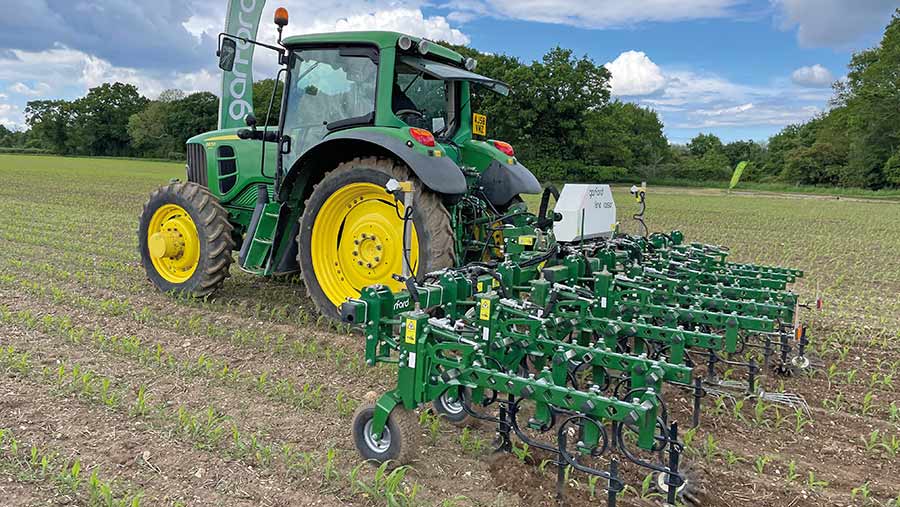 Robocrop is the firm’s inter-row offering, which is configured with a separate steering headstock, to which the fixed hoe attaches. This gives the flexibility for it to be used with other implements.

The guidance system analyzes crop images at a rate of 30 frames/sec, which allows it to work at speeds of 12kph.

Models are available from 1m to 18m in a mounted folding frame and there is even a 24m trailed option. A huge array of tines, shares, blades and crop protectors can be attached to these to suit the job in hand.

Each hoe unit is mounted on a parallel linkage and has an adjustable frame on which cultivating elements can be arranged in different formations. These run on a front depth wheel, with a removable handle to adjust height.

Additional options include a down-pressure system to keep the implement in the ground and Isobus section control. Unlike competitor machines, this lifts just the tines, leaving the depth wheels in place.

A new smart cultivator from US firm Stout Industrial Technology aims to address the problem of labor shortages in the fresh produce sector by offering precision weeding of high-value crops such as lettuce.

The trailed implement is fitted with an artificial intelligence (AI) system that identifies the precise locations of crops and weeds, before using ultra-accurate weeding arms to dislodge any undesirables. 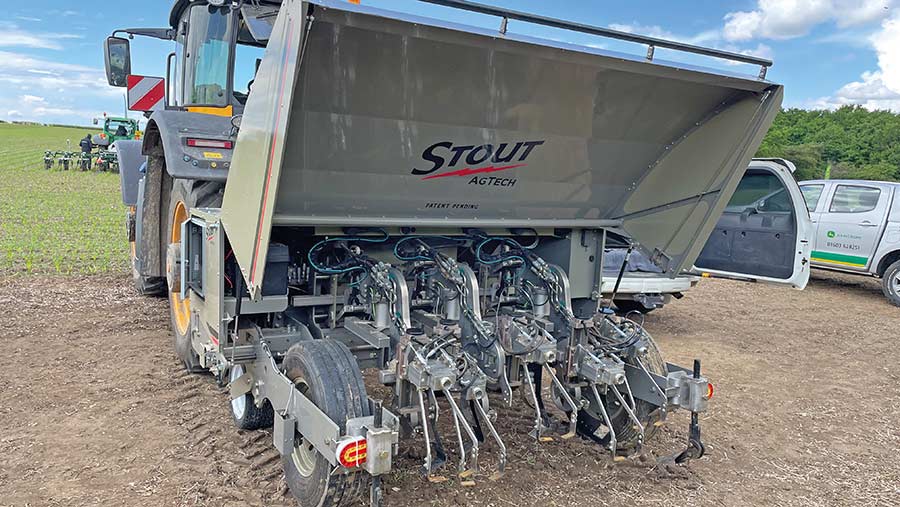 It can do this thanks to a series of high-definition cameras that scan the field and send images to the AI ​​brain (or neural network, to use the proper term), where they are analysed.

The firm says setup is simple, with a touchscreen on the machine where users enter crop type, plant spacing, row spacing and machine size. Once these simple parameters have been added, it can be driven up a row and left to its own devices.

It is designed to work on 1.8-2m beds and can cover up to eight rows in a pass, working at speeds of up to 2.5kph.

Stout machines are imported by UK Planter Solutions and, to date, there is just one demo machine in the UK. Prices are yet to be announced.