Nelligan is a 6-foot, 210-pound flanker and hooker who graduated from the Severn School in Maryland where he was team captain in lacrosse, football and swimming—and also team MVP in the latter two. He took up rugby at West Point and is now a promising prospect in Thursday’s MLR Collegiate Draft. Nelligan played for USA Rugby for the first time this summer with the under-23 team.

On his introduction to rugby . , ,

I’ve been an athlete my entire life. I love sports. And once I realized that football wasn’t going to work out, I was like, ‘Well, I got to play something else.’ I love the, I guess, intensity, the hitting, sort of the violence of football. And I knew of rugby—I’d never played it before and had seen a game or two—but I was just like, ‘Screw it, I’m going to try it out. Then it ended up being the perfect fit for me. I always loved football, but with rugby the open field nature of it and how it’s a continuous game really attracted me.

I play hooker and flanker. At flanker, it’s my motor—I just keep going. I don’t really have an off switch. So that fit perfectly. And then the reason I started playing hooker was just, one day, our backup hooker went down. This is my freshman year. We were doing a scrimmages, A side versus B side, and the B’s hooker went down. No one else played hooker.

[The coaches were] like, ‘We need someone to play,’ and I just sort of ran in there. ‘Do you know how to play hooker? I was like, ‘No, I’ve been playing the game for six months, but I’ll try it.’ I scrummed down once, and they’re like, ‘You haven’t done this before, but it worked out OK.’ And then they just kept putting me in there. 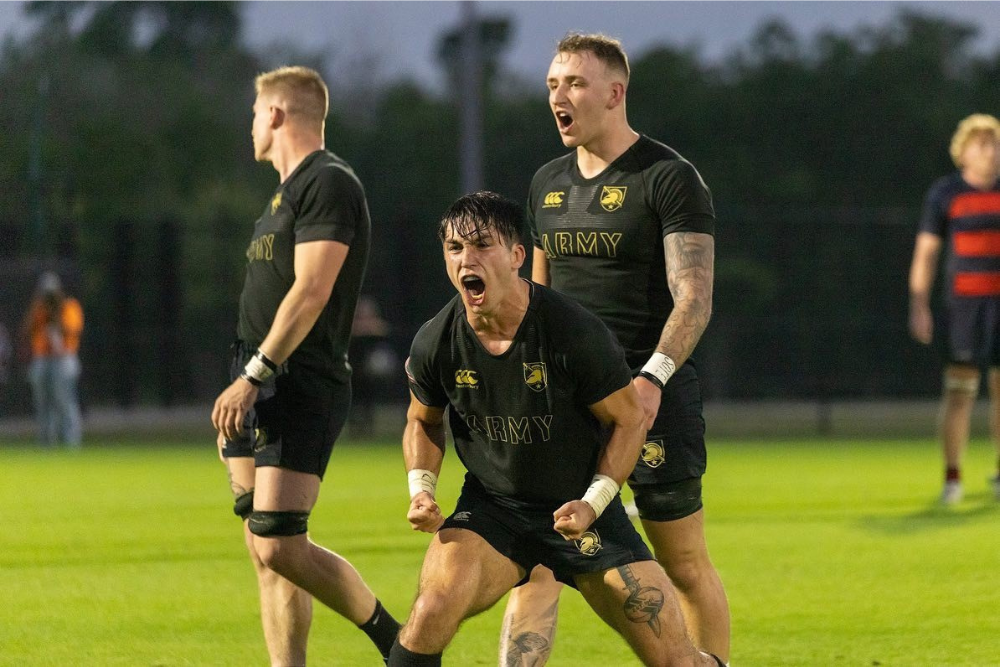 The throwing came naturally because I was a long snapper in football. One of the warmup drills we do is an over-the-head pass like you’re long snapping it, and it ended up translating perfectly. So that was something that I added to my toolbox and then turned out that I was able to move into the starting role my senior year.

I have family in New Zealand. I’m actually Maori. That’s where my dad’s family comes from, but until I was 18, I had never interacted with them at all, so I didn’t really know much about it. So that heritage has become more important to me as of recently, but no, there was no other introduction to rugby like it was playing at West Point was my first sort of like actual exposure to it.

Watching international rugby has been huge for my development, actually. So I started following international rugby my sophomore year, so that would be 2019. And over Covid when everything paused, that’s when I really got into watching all those games. And then the North versus South game [in 2020], I’ve probably watched six or seven times, just because it was one of my favorite games that I’ve ever seen. So I just kept watching it over and over again. Because you obviously learn a lot of lessons when you watch film but also when you watch the highest level, and you actually have coaches who will sit there and pick it apart with and show you stuff. So I have become a large All-Blacks fan.

On training tech with Army rugby. , ,

We used GPS is for every practice and then also games as well. Those were super helpful for us just because it wasn’t necessarily the coaches trying to manage our meters. It was more seeing who was really putting up numbers and working really hard during practices. It was another thing to have in the back of your head, like I need to be working a little bit harder because you’re competing with the guy next to you. When I was playing six [i.e. flanker], my counterpart, the seven, Steven Rohde, we would just go back and forth trying to beat each other on the GPS. I think it was really healthy competition throughout the team, and that helped us a lot.

On getting a service deferral to pursue pro rugby. , ,

There’s two of us, me and Collin Grosse. We submitted our paperwork back in October, and basically, the paperwork had to go through the entire chain of command at West Point, and then all the way up to the Secretary of Defense. As you can imagine, the Secretary of Defense, Secretary of the Army, Chairman of the Joint Chiefs of Staff—all very, extremely busy people. They see a lot cycled through their desks so it was a waiting game. There was a lot we had to do in terms of trying to make our packets more attractive, do bio cards, explain what our 5-, 10-year plan was, all that stuff.

Our Play of the Week, presented by @USAAis the try by Koikoi Nelligan in @ArmyWP_MRugby‘s D1A Championship Semifinal victory over Lindenwood‼️

The Black Knights will play for the National Title this Saturday in Houston! #GoArmy pic.twitter.com/djTzdnzdw0

We did have to have a lot of patience because there was uncertainty on what exactly was going on in our lives, and we actually didn’t find out that it had been approved until the day of graduation. There’s two hours before we’re going to be marching out on the field, and they’re like, ‘The Chairman of the Joint Chiefs of Staff and Secretary of the Army want to meet with you.’ And they told us that our packets are approved.

One thing that we learned throughout the process is you really have to be serious about it. You really have to love the sport to want to do that. And I obviously do, and I know Collin does. I can’t thank the Army enough for approving it in the first place and putting their trust into USA Rugby and the MLR. So that’s huge also for the sport ofrugby because the Army is the validity of the MLR in the US, which I think is important, because some of the other leagues that they that the Army has let people go to are the NFL, MLB , and NHL.

This summer was my first. I got a call June 1 or something, inviting me to the USA Falcons training camp and then also the under-23 tour to the Netherlands. That was my first time ever interacting with USA Rugby. I did both of those, and I also got invited to this Team USA camp out in Chula Vista coming up pretty soon.

On wearing the USA jersey for the first time. , ,

It is a crazy experience. One, a lot of those guys that were on that team, I played against in college—and we beat them, but there was no bad blood. But all those guys are great rugby players. Being able to wear that jersey for the first time and hear the national anthem while you’re wearing it, you sort of get a sense in your mind that ‘I made it.’ But the work never stops. I know a lot of those guys have the same attitude where they come in and are like, ‘OK, we’re here. We have this title. Now let’s go show everyone that we earned it.’

On his military specialty . , ,

I branched infantry along with the majority of the rugby players who were seniors. I was going to head to Fort Hood, Texas, but with the service deferral, that’ll get pushed back. And then I don’t know if things will change or not. I’m likely to be able to get infantry again, just because I fit the mold of that, so that’s exciting because that is something that I’ve really wanted to do for a while. But I’ve got to chase a dream right now so that’s what I’m doing with rugby right now.