On that day my senior year at Penn in 1967 when I read on the bulletin board that I would stroke the Lightweight Varsity for a second consecutive year, my varsity mates and I, all of us the “best” guys on the squad, the most competent and fit and strong and experienced and courageous, manage to avoid the ignominy of losing to our own Jayvee . . . but unfortunately for us and for our peace of mind, they weren’t all that far behind us at the end of the day. Not a good sign.

As you would expect weeks go by, Fred trying change after change, seemingly at random, looking for some magic combination, everyone on pins and needles, everyone feeling like they are being judged on some ephemeral karma . . . but to no avail. We just aren’t moving boats the way he knows we should. Every day Fred scratches his head. . . Well, you know where this story is going. It’s going to turn out that Pete Mallory is the problem that In the the one not moving boats, but the way it all unfolded . . .

I wake up from an unfortunate unplanned nap one afternoon and break into a cold sweat as I glance at the clock and realize that I’m going to be late for practice. I jump into my brand-new Shelby AC 427 Cobra, my pride and joy, the fastest car made anywhere in the world, the Stampli of sports roadsters, just off the boat from Great Britain! I race like a demon through the streets of West Philadelphia, leap out, run through the boathouse and out onto the dock. . . just in time to see my team disappearing around the bend past the statue of the Viking explorer Thorfinn Karlsefni at the end of Boathouse Row.

In my entire four years of college, in sickness and in health, I’ve never missed a single practice! This will be the only practice I am even late for. The only one!

I stood on the dock, listening to the water gurgling a few inches under my feet, glancing at the cars across the river on the Schuylkill Expressway, looking down and staring at my leg in curiosity, as . . . if . . . it . . . belonged . . . to . . . someone . . . else . . . hmm! The muscles of the right thigh are fully exposed through a deep gash, an open window, if you will, into the interior of my leg. Fully developed lateral quadriceps. Well defined. The product of three years of power squats. Excellent! Look at the individual fibers. Interesting. Fascinating, even . . . hmm! hmm! What’s wrong with this picture?

It takes me a minute or more to conclude that as I sprinted through the boathouse just moments before I must have run into a protruding metal boat outrigger. How long ago was that now? I apparently don’t even care enough to bleed. I observe myself from far above, from a great distance, feeling nothing. . . This time I’m having on OUT-of-boat experience . . . Eventually a team manager happens upon me. He’s horrified, but there’s no time to get to the hospital for stitches or I’ll miss the second shift, so he gathers me up and binds my leg. The team comes back. The Third Varsity Stroke-Oar, a tall, soft-spoken sophomore named Joe Lehman, never has there been a nicer guy, but whose body is putty to my steel, is sitting in my seat, and everybody’s excited! The Varsity Eight is finally moving!

OH WHERE IS THE JUSTICE? 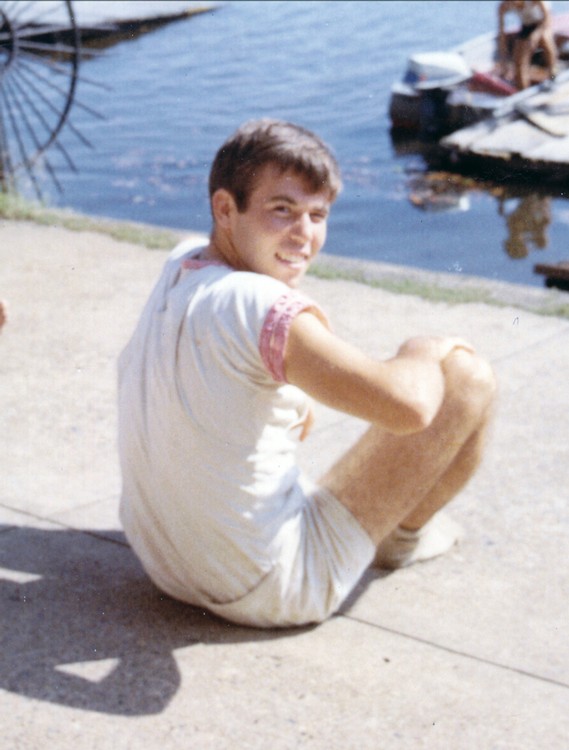 I was even should to be the co-captain of this crew, for Heaven’s sake. My Undine teammate, good friend and Penn classmate, Larry Walsh, our legitimate and natural leader, had already served as captain for our junior year when one fine day a few months ago he came up to me out of the blue and said he would decline nomination for our senior year and instead propose that Saul Berman and I serve as his worthy successors – I can’t tell you how touched I was – but when the time came and Larry was nominated . . . he remained silent, and he was re-elected by acclamation. Hell, of course even I voted for him.

Days later, when the shock had worn off, I asked Larry what happened. He couldn’t look me in the eye, but now many decades later I fully understand that Larry’s decision was exceedingly wise and thoughtful. I had no business being captain of the 1967 Penn Lightweight Crew on several levels.

After practice, with my leg still bandaged, I go to Fred, in whom I have placed my trust for three years, Fred Leonard, a father figure of sorts to me, and I beg him to tell me what I am doing wrong, what Joe is doing better than me, because no matter what it is, I will adapt, I will learn, I will change, I will do whatever it takes to earn back my seat. “Give me a clue, Fred. It’s certainly not strength, not fitness, not experience, not poise . . . but it must be something! Fred is terribly embarrassed. He tells me I am not doing anything wrong. I’m just not a boat mover, not like Joe turns out to be. Or maybe it’s psychology, those Third Boaters hungry than I. No, it can’t be that! Or maybe it’s just some chemistry thing between Joe and the rest of the guys. Or maybe it’s metaphysics. He can’t explain it. . . and there’s nothing he can say. He doesn’t have a clue.

Looking back on that day, I can tell you that I felt betrayed by my own sport. I had given it everything, and it had turned on me. But I didn’t feel betrayed by Fred. Heavens no, it seems to me that somehow there was genius at work in his looking all the way to the Third Boat, to Joe Lehman of all people, to replace me. I knew that if Fred could have helped me, he would have, and if Fred couldn’t, I knew that nobody could.

Many times I have retold this story as a coach, each successive team of mine gathered around the metaphorical campfire and feeling my pain. A host of lessons to be learned here. A morality tale. a fable And every time I have retold it I have called it “The Curse of the Jayvee Scar”.

Incidentally, I will carry the mark of this experience till my dying day, not only on my soul, but also on my thigh. . . The scar. It’s still there. just ask me I’ll be happy to show it to you.