Mark suffered an injury whilst training at his judo club in 1988 which caused a severe spinal cord injury, resulting in him living his life as a quadriplegic. Supported by his wife Lorraine, the pair have lived a fulfilled life, traveling around the world, determined to not let the injury stop them from living a full and happy life. Continuing as a staunch supporter and follower of judo, Mark has displayed the judo values ​​and fighting strength on and off the mat. When Mark was admitted into hospital in October 2021, staff saw just how determined he was. Mark was admitted with severe pneumonia which led to sepsis. This was where he had the ultimate fight for his life, as recovery from this infection was uncertain and complex due to his existing injuries. When faced with the biggest fight of his life, the hospital staff were humbled by Mark and his bravery, strength, and willingness to keep going. Uncertain of the outcome, both Mark and his wife Lorraine’s response was with absolute dignity. After 51 days in critical care and a total of 62 days in hospital, Mark was discharged and allowed to return home.

University of Nottingham coach Dr Paul Robinson awarded Mark his honorary Dan Grade on Saturday. Throughout Paul’s judo career, he has always been moved by Mark’s story. Paul awarded Mark his Dan Grade at the University’s dojo with Mark’s family and friends as well as current students and alumni present. Dr. Paul said: ,Princess Anne has been awarded an Honorary Dan Grade, so it’s not something done very often and with some weight led to it and a couple of people writing and sending messages, they agreed, so we are really proud and please to be able to do today award, Mark Coleman, his honorary black belt for his bravery”. Paul also led a session with alumni and current students where Mark and his wife, Lorraine stayed and watched. Explaining how Mark sustained his injury, Paul said: ,some time ago not Mark sustained a neck injury, what we would call a high spinal injury whilst he was doing judo, which is very rare in our sport. It was very bad luck, which damaged his spinal cord and severely limited his movement from the neck down. He has a little bit of movement to his arms but that’s about it, Prior to being awarded his Dan Grade, Paul had not met Mark in person but the pair have written to each other for a period of time. Paul said how he has communicated with Mark leading up to the event ,Today was my first day meeting Mark, I have corresponded with him over the last few months at great lengths. I have lost count of how much time. We correspond by email, my partner actually met him during her work as a nurse, she spoke to me about his case, and I sort of put this together with the history that I heard about him in the region.,

Presented with his 1st Dan, Mark was overwhelmed with emotion. Mentioning how”absolutely amazingit was. Mark was drawn to the sport as a way of “keeping fit, a challenge, ironically a form of self-defense, to be able to protect myself.” Prior to Mark’s injury, he went on to achieve other life goals. “I left school and did an apprenticeship training as a mechanic, worked with a company back in the day called Henley’s, training to be a truck mechanic. After my apprenticeship I moved to the ambulance service as a mechanic, that was where I was working when I had my accident, so obviously I was retired from the ambulance service on ill health after that. I did go back as a volunteer for a few years and then after that for Derbyshire Police”. Mark has also gone on to fundraise for the autistic society. Wife, Lorraine, has spent 16 years being Mark’s full-time career “my wife gave up work to look after me which she has done pretty much 24/7 for 34 years, but after about 16 years she wouldn’t take credit for how good of a job she was doing looking after and providing for me. She wanted to do something for herself so she retrained as a teacher and is now a college lecture and course leader, which I am very proud of.” Despite his injury, Mark has always kept a keen interest in judo. When asked about his favorite judo memory Mark said: “for me, it would probably be Brian Jacks, back in the day, watching him at the Olympics and then any televised judo you could get on, there wasn’t a lot on the television back then. After watching Neil Adams doing Gladiators. I remember Brian being fantastic at the dips on Superstars, Mark also mentioned how he has always enjoyed watching contact sports “individuals and contact sports, I sort of followed martial arts generally and boxing, I like motorsports as well.” Not only being a fan of sports, Mark and Lorraine, have managed to travel around the world, Discussing some of their favorite holiday destinations, Mark said: “One of my favorite places to go on holiday is Las Vegas”.

During Mark’s stay in hospital in October 2021, he formed a bond with staff over his love of judo. ,Whilst I was ill in hospital there was a nurse who was looking after me who sort of told me that there was actually a chap with my name who does martial arts, who I think is a UFC champion”. However, Mark has gone on to do other sports “Since my accident I have gone on to do archery, and wheelchair rugby. I have trained with some of the Olympic/Paralympic teams. Although I wasn’t strong enough to use a long bow, so I had a crossbow”. Despite his injuries, Mark has gone on to live a rich and fulfilling life. ,There’s been a lot of water under the bridge all those years, having my accident there are things that I haven’t been able to do that I would have done as an able-bodied person, but as a disabled person there are a lot of things I have done that I never would have been able to achieve as an able-bodied person and indeed we have a good life, good social life and we do a lot more than most able-bodied couples” 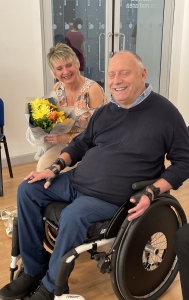 Lorraine mentioned how Paul has provided so much support to both her and Mark. ,Paul has been amazing, and it’s been overwhelming to me today, Even though Mark would have wanted to achieve his 1st Dan himself, the day has been wonderful for him and we can’t thank Paul enough for this”. Lorraine went on to say: “I think if he had the choice back then and he obviously didn’t have his accident then he would have continued and got his black belt. That was his aim”. Regardless of Mark’s injury, one of his aims would have been gaining his 1st Dan. Lorraine said ,it’s probably something he would have wanted to work towards if he could have done”. Lorraine also reiterated how much Mark has continued to be a beloved fan of judo even after his accident. ,He has always followed judo, even after his accident and all the way through. When it’s been on the TV, he always watches it”. Entire the day, University of Nottingham students and alumni came to congratulate Mark on his 1st Dan.

Speaking of Mark’s emotions on the day, Lorraine said: “He is so overwhelmed and incredibly proud of being able to get this and his face today speaks volumes”. Overwhelmed with all the well wishes and achieving one of his goals. “He will remember this for the rest of his life”.