After watching his team put up a 339 to finish ninth in Tuesday’s Zionsville Invitational, Columbus North boys golf coach Doug Bieker did something he hadn’t done in 26 years of coaching.

Bieker took his top seven players to Greensburg Country Club to play them off for the five spots in Friday’s Greensburg Sectional. Senior Luke Schneider; juniors Willy Davis, Jack Schiavello and John Merritt and freshman Brady Schneider emerged as the five who will play.

“We played really as poorly (Tuesday) as we’ve played in a lot of years,” Bieker said. “I bet it’s been 10 years since we shot that high a number, probably more. I’ve been trying different things to get them to play to what their ability is, and I haven’t found the right words. I probably overestimated this team’s ability. I believed we were good enough to make it out of the regional and make it to state, but we’ve lost to seven teams in our regional. This team has a lot of work to do in the next eight days if they’re going to have a chance to make it to state. I believe this team is capable, but they have not shown me that on the golf course this year.”

The top four Bull Dogs did combine to shoot a 298 on Wednesday at Greensburg. A similar number on Friday would likely give 16th-ranked North a fifth consecutive sectional title.

“We are rated as the favorite overall again, but it’s not a foregone conclusion,” Bieker said. “I’m not giving us the trophy yet. Columbus East has been playing better. I think they’re capable. North Decatur has some talent. If we play our best, I think our best beats everybody else’s best, but if we don’t play our best, I think that brings other schools into the mix.” 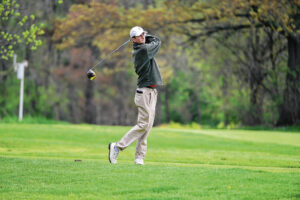 Columbus East’s Pierce Arnholt watches his drive on No. 9 during a match against Columbus North at Otter Creek Golf Course.

The Bull Dogs have beaten East in a dual and tri match, as well as four invitationals this season, but the Olympians did shoot a 160 on the same nine at Greensburg where North shot a 170 this season. East beat Greensburg in that dual match and led Batesville in a rain-shortened event at Otter Creek.

Olympians coach Keith VanDeventer figures his team will battle with Greensburg, Batesville and North Decatur for the second and third qualifying spots to the June 9 Providence Regional.

“That was one of our goals,” VanDeventer said. “We’re going over there with hope and the attitude that can be one of those teams. I think there are probably four teams fighting for those last two spots, and we think we can be one of them if we play well. We’re not looking at other teams. We’re just looking to play our abilities.”

The Olympians have been led most of the season by sophomore Pierce Arnholt.

“We lose one senior only, so we have the bulk of the kids coming back next year. I think they’re excited to put in the time to try to get better this summer.”

Hauser will also be among the teams playing at Greensburg on Friday. The Jets are led by senior Chase Martoccia and sophomore Caleb Wallace.

The girls game begins at 2 pm Sunday, with the boys game to follow at around 4 pm Tickets are $8 per person.

Stahl is part of a six-player South Group that is joining the six-player Core Group for Sunday’s game. The Core Group and a six-player North Group will play the Indiana Senior All-Stars Wednesday at Mt. Vernon (Fortville).

The Indiana-Kentucky Senior All-Star Games are June 10 at Owensboro, Kentucky, and June 11 at Bankers Life Fieldhouse in Indianapolis.

The Columbus East boys basketball team will be hosting a skills camp for three age groups Monday through June 9 at East High School.

Cost for each camp is $50, with $30 for each additional camper in the same household.

The camp fee is $50, with checks payable to Columbus East Girls Basketball Camp, and includes a t-shirt. Registration is available at columbuseastathletics.org

North to host Golf for the Gridiron

Columbus North football will host its Golf for the Gridiron fundraiser June 10 at Otter Creek. Registration is at 11 am, the golf scramble is at noon and dinner and awards are at 5 pm

Cost is $100 per player with option to purchase supertickets or $500 per foursome, including supertickets. Hole sponsorship signs are available for $250, and a Fore! The Dogs Package, which includes four golfers, supertickets, hole sponsor and recognition at the event and throughout the season, can be purchased for $1,000.

For more information, or to register, visit gridiron-golf.perfectgolfevent.com or contact Gabe Revell at 812-343-2372.