NEW YORK — The students practiced ripping their training partners’ hands off of their necks in a rowing motion, then kneeing them in the groin, and smashing an elbow into their chins.

You don’t fight power with power, the instructor said. You go for an attacker’s weak points, like their thumbs, then strike back and disable them so you can make your escape.

The Krav Maga class in New York City was organized by a group called Legion, which aims to train Jews in self-defense. It was set up in 2014 in response to rising antisemitism in the US.

“It started with the idea that antisemitism was not getting any better in the United States specifically, but generally everywhere,” said organizer Arielle Mogil. “We have to be prepared to defend ourselves.”

The non-profit The organization connects Jewish people interested in self-defense with gyms it has partnered with for training. Legion vets the gyms, which it often has personal connections to, makes sure the instructors understand their goals, and refers to the gyms to anyone interested in self-defense. Many participants start training who would not have otherwise tried self-defense, or stick with it longer, because of the group’s framework, Mogil said.

Once there are over 10 participants in an area, Legion organizes classes specifically for those students. Training together consistently, as a cohort, helps the group members to better develop their skills, stick with training and form relationships.

They have placed students with 27 gyms and run Legion-specific classes in six locations, Mogil said.

Legion received around 200 applications seeking training locations in the past year, and a number of gyms are nearing the 10 students needed to start a class. Most people hear about the program through word-of-mouth, for example, in synagogue or through connections with other parents. Many gyms also hear about the group’s mission and reach out preemptively, Mogil said.

“Our mission is clear — it’s to get Jews to train,” she said.

The program’s participants are not necessarily Jewish, and don’t need to be. Some are friends or coworkers of Jewish people who heard about the program, for example.

Students span the gamut from religious and secular, and from teenagers and grandparents. The gyms Legion works with are located across the US, including Alaska, Arizona, California, Florida and several locations in New York. There are at least two locations in Canada.

The group used to run a nine-month training course, but most of the gyms abandoned that framework due to pandemic disruptions.

In addition to self-defense, the Legion organizes first aid seminars, training for active shooter situations and talks with specialists including FBI and IDF personnel.

At a recent class in midtown Manhattan, the group’s hard-nosed Israeli instructor Rhon Mizrachi opened the class with warmups and movement drills. 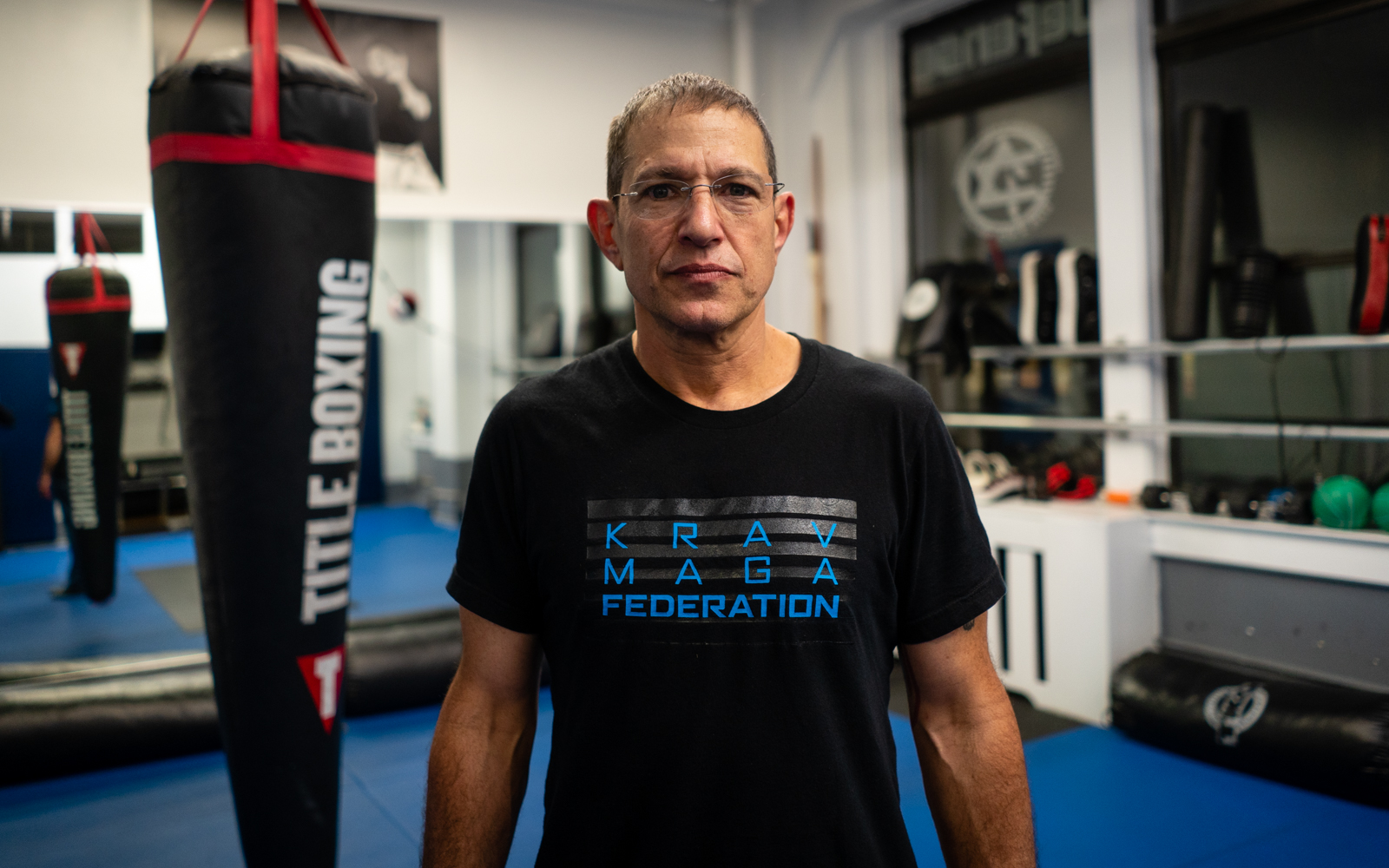 The students, mostly women, did jumping jacks, sit-ups, push-ups and lunges, then practiced stepping into a protective stance, with one foot forward and both hands protecting the face.

They practiced punching combinations and proper groin-kicking technique, leaning back slightly, hands up, chin down, and snapping the leg upward; and knee strikes, with feet shoulder-width apart, stepping forward and driving the leg upward, with the toes pointed down.

Next were roundhouse kicks, swinging the leg at an attacker’s midsection like a baseball bat. You swing your whole body for torque, and the last thing to go is the leg, said Mizrachi, a Krav Maga grandmaster who trained under the fighting system’s founder, Imi Lichtenfeld.

The lesson was peppered with Krav Maga dogma. Your legs are your longest-range weapon, if you’re not holding anything. Your elbows are your shortest, and are not just an impact tool, but a cutting tool. Look, step, then hit. Check both sides and behind you in an altercation, because you don’t know where attackers could come from. Work off of your natural reactions.

“It’s not about tricks. It’s about minimizing him [the attacker], Make him into a victim,” said Mizrachi. “You need to think differently. You’re not a victim, you’re not weak, you’re not small.” 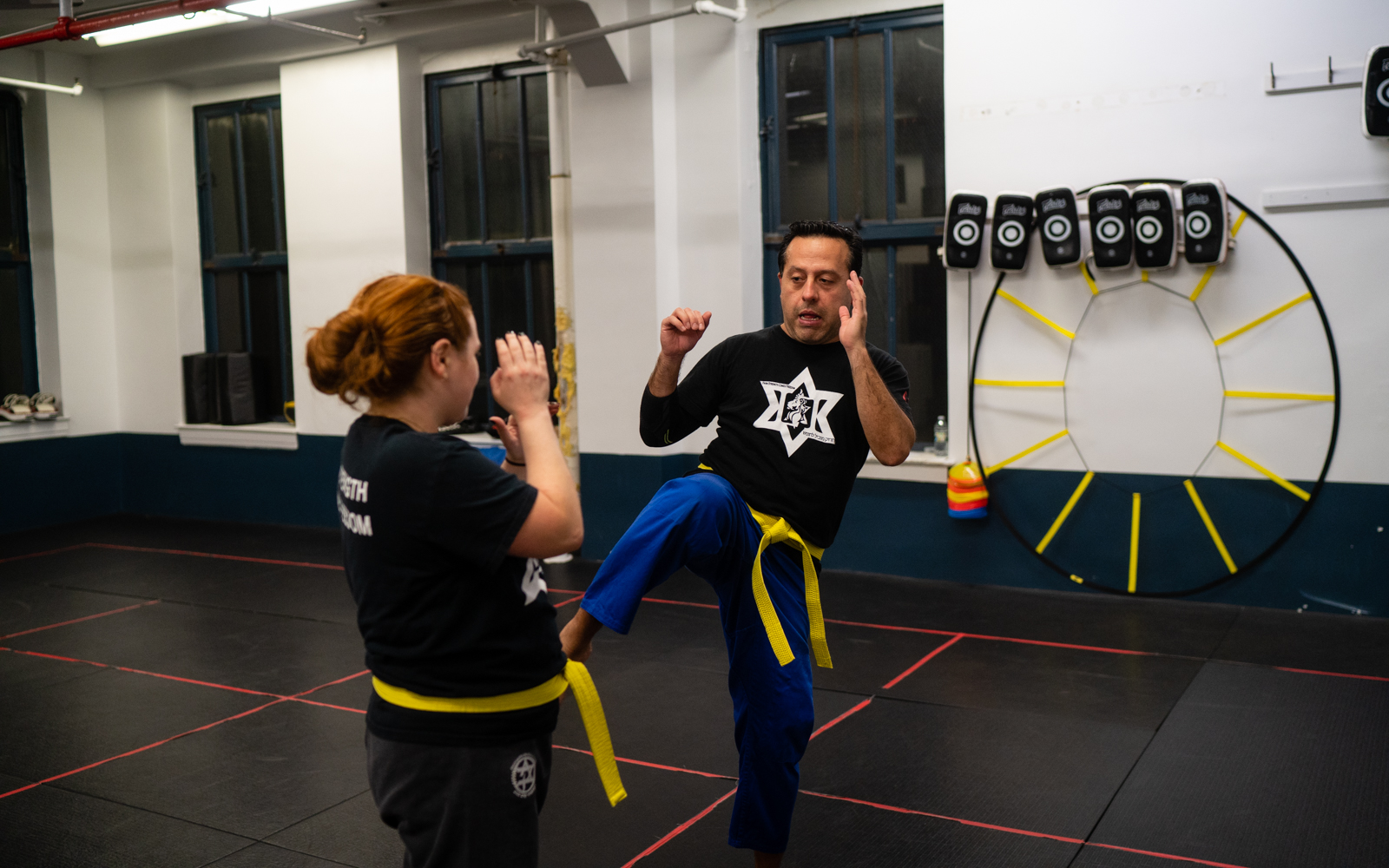 The students stood with their eyes closed and practiced getting surprised by an attack on their neck, and ended with a boxing sparring session, to learn how to keep functioning after taking a hit.

After training, one student said she had always been interested in learning self-defense and found the class by chance. She commuted to the gym from Staten Island.

“I do feel more confident” since starting, she said. “I’ve never had to put it to use, so I’m learning all of these things and will I be able to tap into it in that kind of situation? I think I’ll be able to.”

Participants have put their training to use in the past, Mogil said.

An attacker once assaulted a participant from Legion’s Brooklyn chapter while she was getting out of her car on her way home. She fought back, driving off the assistant and saving herself from serious injury.

Another participant was on vacation with her family when she witnessed a motorcycle accident and put to use first aid training she learned through the group. She used a tourniquet to stanch a wound, kept her composure, and remained with the crash victim until paramedics arrived. 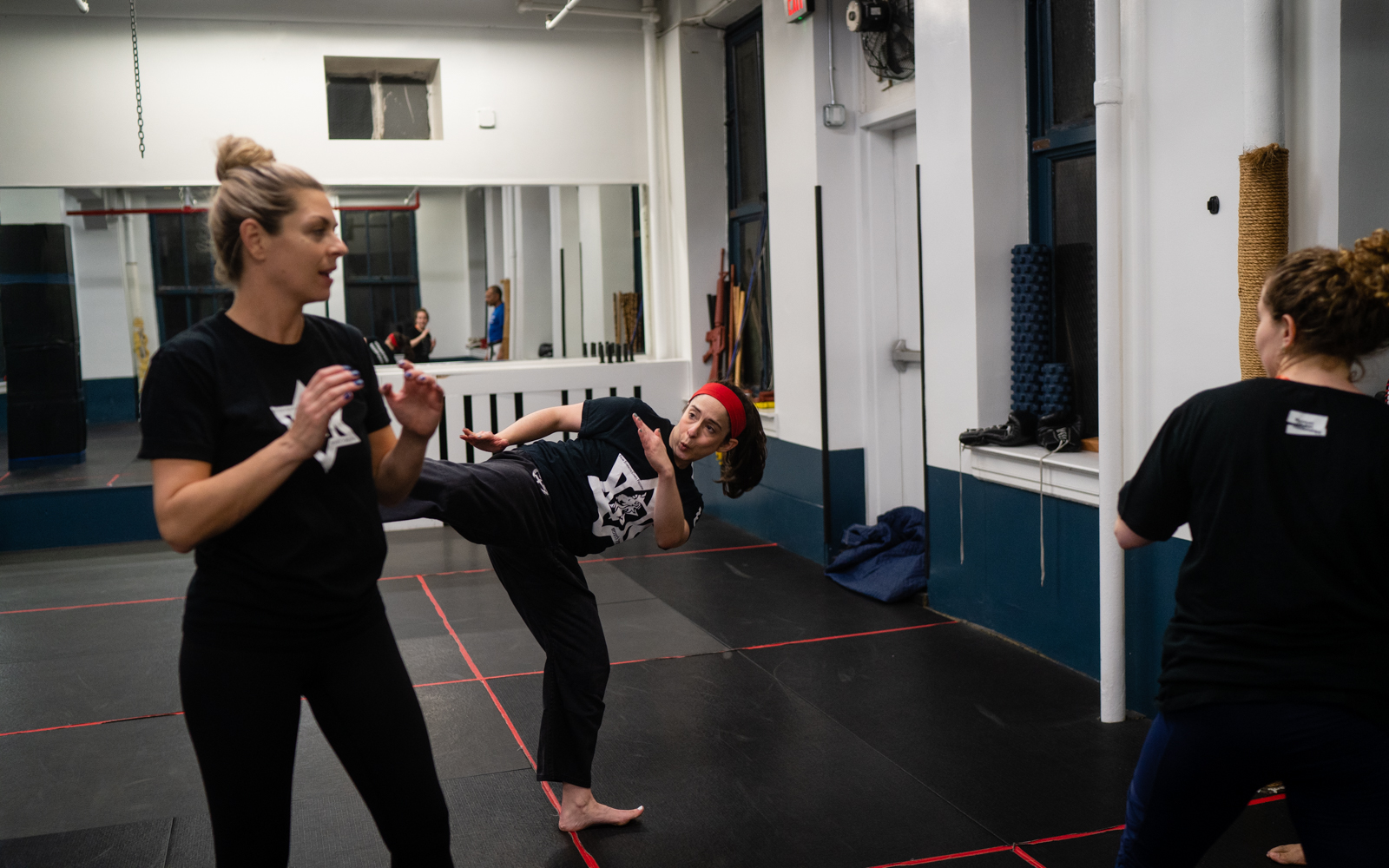 Jews are targeted in hate crimes in New York City more than any other group, year after year. The NYPD’s hate crimes dashboard reported 144 confirmed attacks against Jews between January and October 2021, out of 416 total hate crimes in the city. Attacks on Jews accounted for 35 percent of all hate crimes, the largest proportion of any group.

The NYPD counts 536 hate crimes against Jews since 2019, by far the highest tally of any group.

Antisemitic attackers have targeted Jewish institutions in the New York area and US repeatedly in the past years, most recently in this month’s hostage situation at a Texas synagogue. In 2019, racist assailants killed Jews at a Hanukkah party in Monsey, New York, and a kosher grocery store in New Jersey.

Tensions spiked last year due to Israel’s conflict with the Hamas terror group in Gaza, with some protests spilling into scuffles between pro-Palestinian and pro-Israel activists in New York and Los Angeles. Legion saw new interest swell at the same time.

In the most recent New York attacks, earlier this month, two assailants chased an ultra-Orthodox Jewish man down a street in Brooklyn’s Williamsburg neighborhood, threw him to the ground and beat him with sticks, slicing his head.

Late last month, an attacker called a Jewish man wearing an Israeli military sweatshirt a “dirty Jew” and punched him in the face, and vandals scrawled swastikas on a park playground in Boro Park, which has a large Jewish population.