One person was killed and four others were shot early Monday morning in downtown Sacramento, police say. It’s the second mass shooting in the central city in the last three months.

The shooting happened at 16th and L streets outside of Mix Nightclub. It took place just as nightclubs were letting out, police say.

Sacramento Police officers place evidence markers along 16th Street in downtown, around the corner from where five people were shot — and one killed — after the Mix Nightclub let out on July 4, 2022.Kris Hooks / CapRadio

Police have closed off 16th Street between J and L streets.

Family and friends have identified the person killed as Greg Najee Grimes, 31. Grimes was an assistant football coach at Inderkum High School, the school he graduated from in 2008 before earning a scholarship to Boise State University.

Today our Tiger Family has suffered a tremendous loss. We come together as we mourn the passing of player, coach, mentor, son, and father Greg Grimes. My prayers goes out to his family through this difficult time. pic.twitter.com/u9TzSd2iAh

Rey Rodriguez was in the nightclub last night when it happened. He said he didn’t hear any arguments or fighting inside the nightclub, but as he and his friends left around 1:50 am, they heard shots on the street below.

“All you hear is bam bam bam …. it’s just automatic gunfire,” Rodriguez said. “They brought us back inside the club, basically.”

Rodriguez said they stayed inside the club for around 15 minutes while the police arrived. After leaving the club he said there were bullet casings “all over the ground.” He was at the scene Monday morning waiting to get his car, which was behind crime scene tape.

Sacramento police are looking for assistance getting video and photos from the community. The department has set up a portal where witnesses can upload video of the shooting, The public can also call (916) 808-5471 or (916) 443-4357 to submit tips anonymously.

We are seeking assistance from the community and looking for any video evidence that may have been captured during this shooting. We have activated the below QR Code for video submittal. pic.twitter.com/KCclMRKskm

In a statementMayor Darrell Steinberg called for people to treat gun violence “an emergency that requires and immediate and effective response.”

“Whether it’s a mass shooting or an altercation that turns deadly, the root cause is the same,” Steinberg wrote. “The proliferation of guns and a lack of adequate societal and mental health supports in our country means more people are armed and ready to pull the trigger.” 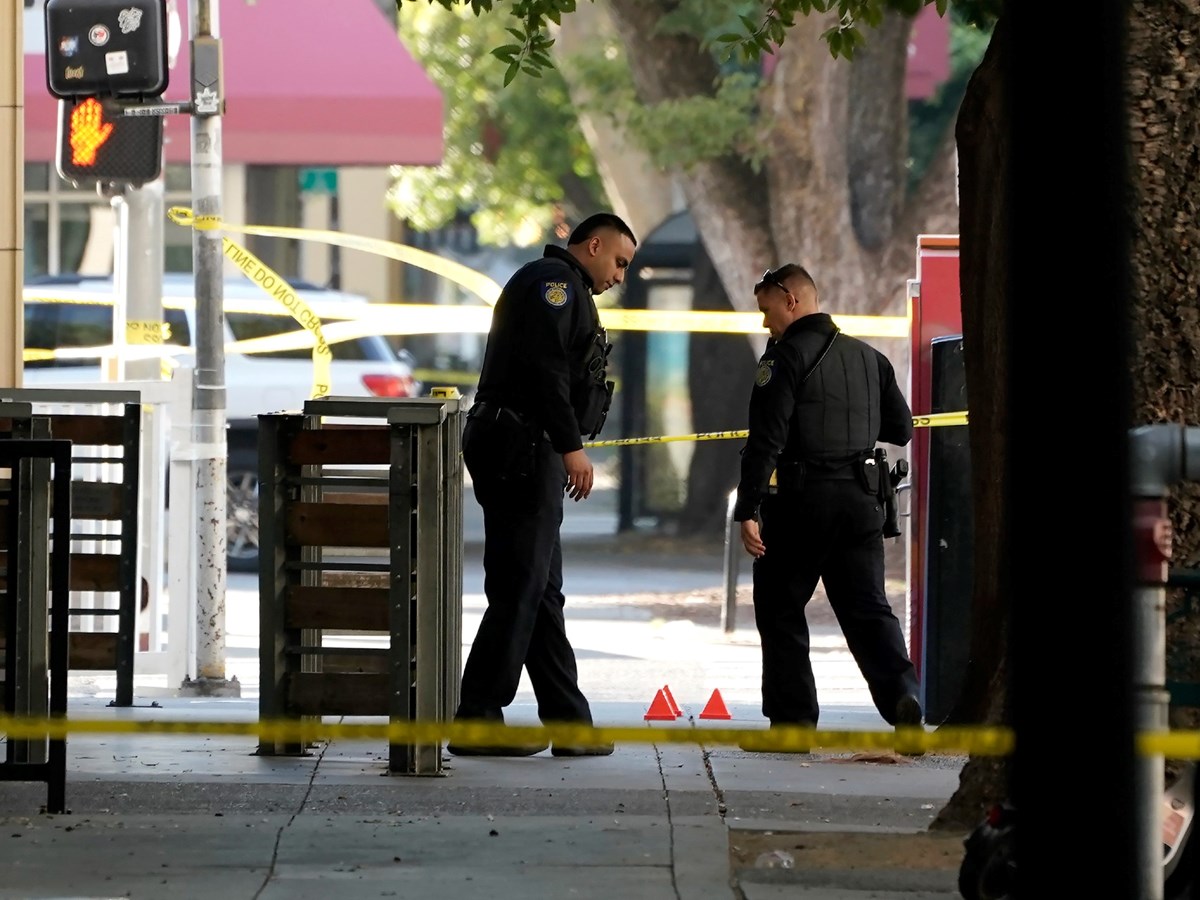 Sacramento Police officers look over evidence markers near the scene of a fatal shooting outside of a downtown Sacramento, Calif., night club in the early morning hours on Monday, July 4, 2022.AP Photo/Rich Pedroncelli

City Council member Katie Valenzuela, who represents the central city, said her first thought after getting a call about the shooting was “not again.”

“You keep hoping that when you hear these sort of terrible incidents that is the last time,” Valenzuela said in a phone interview with CapRadio. “You hope that we’ll be able to put in place interventions to keep things from happening again.”

This is the third mass shooting in Sacramento this year.

The first happened in February when a man killed his three daughters, a chaperone and himself during a supervised visit.

In April, six people were killed and 12 others were injured in a mass shooting on K Street, one of the deadliest shootings in the city’s history. On the night of the shooting, police say at least five people opened fire in the crowded nightlife district near K and 10th streets over an apparent dispute. Three people were arrested and charged with murder.

“This is another instance of, you know, we understand what’s happening,” Valenzuela said. “It’s really a matter of how do we put our resources and our policies behind supporting those things.”

After the April shooting, Valenzuela, Steinberg and other city leaders called for more funding for youth and gang prevention programs to build off of previous successes. Before the pandemic, Sacramento recorded a 28-month stretch without a youth homicide in the city.

Sacramento will vote in November on a ballot measure that would require the city to set aside 40% of its cannabis business operations taxes for youth funding, derived an estimated $12 million annually.

This is a developing story and will be updated.

CapRadio provides a trusted source of news because of you. As a nonprofit organization, donations from people like you sustain the journalism that allows us to discover stories that are important to our audience. If you believe in what we do and support our mission, please donate today,