Paulina Porizkova has opened up about how self-defense classes have changed her life while proudly showing off her hand-to-hand combat skills in session.

The supermodel took to Instagram on Sunday to post footage of herself practicing Krav Maga — a form of self-defense developed by the Israeli army — with her 28-year-old son Jonathan.

‘One of the best things you can do for yourself as a woman, is to learn self-defense,’ Porizkova, 54, wrote in the caption. ‘I spent most of my forties doing karate, kickboxing, and Krav Maga. And the self-confidence it instilled in me has changed my life.’

Take that! Paulina Porizkova, 56, took to Instagram on Sunday to post footage of herself practicing Krav Maga, a form of self-defense developed by the Israeli army 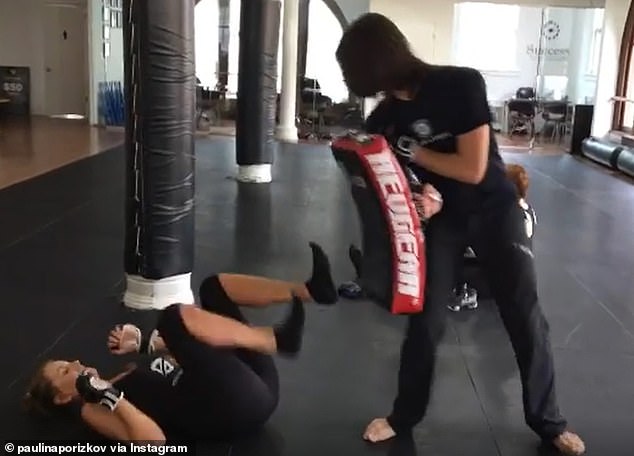 Training session: The supermodel was joined by her son Jonathan, 28, who held a punching shield that she kicked while lying in a defensive position on the floor

At the start of the short video, Porizkova is lying on the ground in a defensive position as she kicks the punching shield her oldest son is holding in front of her.

Jonathan then moves closer, giving him a chance to punch the shield before kicking him away. The model quickly gets on her feet and throws some more impressive jabs his way.

Porizkova, who also has a 23-year-old son, Oliver, with her late husband Ric Ocasek, explained in her caption that self-defense classes have changed the way she carries herself when she is out in public.

‘Often times, it may just be that the knowledge I can kick your a** is what keeps the creeps away,’ she said. ‘I walk with confidence. I believe that makes me less of a target. (And my round kick used to be a killer before my stupid arthritic hips kicked in. But my left jab and right hook are still good.)’ 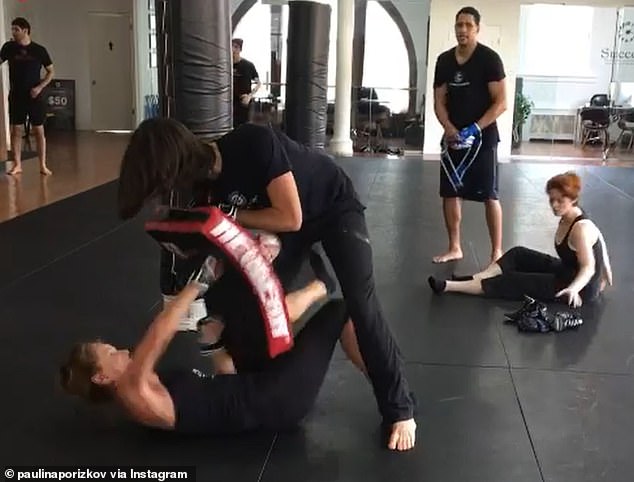 Right hook: When Jonathan moved closer, she started punching the shield with all her might 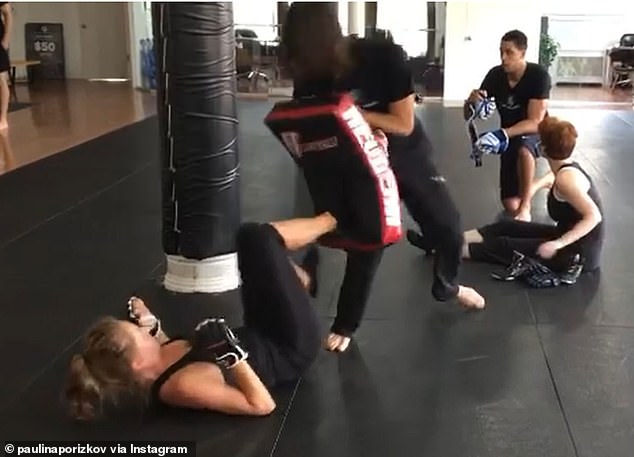 Impressive: The Sports Illustrated Swimsuit alum then kicked Jonathan away and sprung to her feet 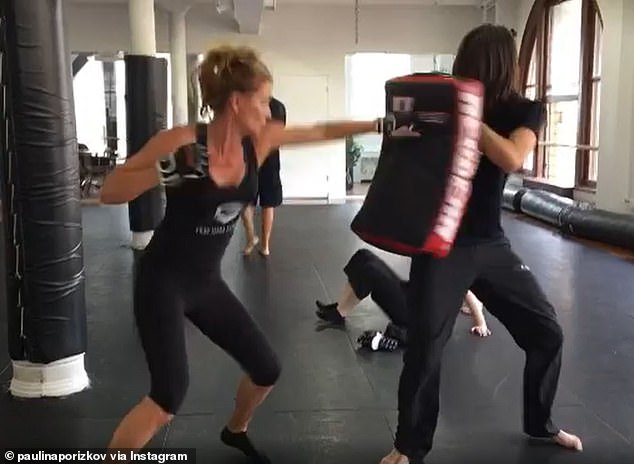 Getting into it: Porizkova threw a few more punches while on her feet

Porizkova shared the post to encourage her 596,000 followers to sign-up for celebrity trainer Ashley Borden’s self-defense workshop on Monday.

‘And you guys, It’s free! There is literally no reason not to do it,’ she wrote, sharing a link in her bio for the class. 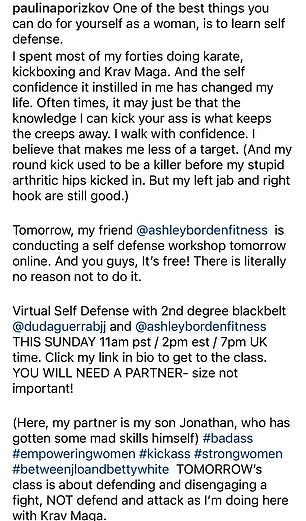 Candid: Porizkova opened up about how self-defense classes have changed her life, saying she now walks with more confidence and feels like ‘less of a target’

‘YOU WILL NEED A PARTNER — size not important! (Here, my partner is my son Jonathan, who has gotten some mad skills himself) #badass #empoweringwomen #kickass #strongwomen #betweenjloandbettywhite.

‘TOMORROW’s class is about defending and disengaging a fight,’ she added, ‘NOT defend and attack as I’m doing here with Krav Maga.’

Porizkova’s self-defense post follows her recent getaway to an undisclosed beachside resort where she enjoyed some fun in the sun last week.

She posted a few sultry swimsuit photos, starting with an image of her modeling a black string bikini.

‘Inconsequential pic number one. Day one of resort life, and I couldn’t resist posing,’ she captioned the snapshot, which shows her sitting on a stone wall overlooking the ocean.

Her back is to the water, and she is leaning on her hands as she looks up at the blue sky, her wavy blonde hair blowing in the breeze.

In another snapshot from the trip, she is leaning against a palm tree while flaunting her abs in a white string bikini. 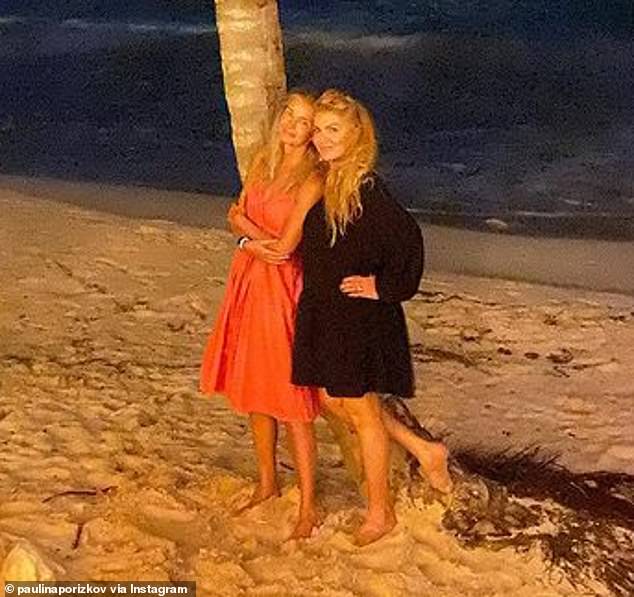 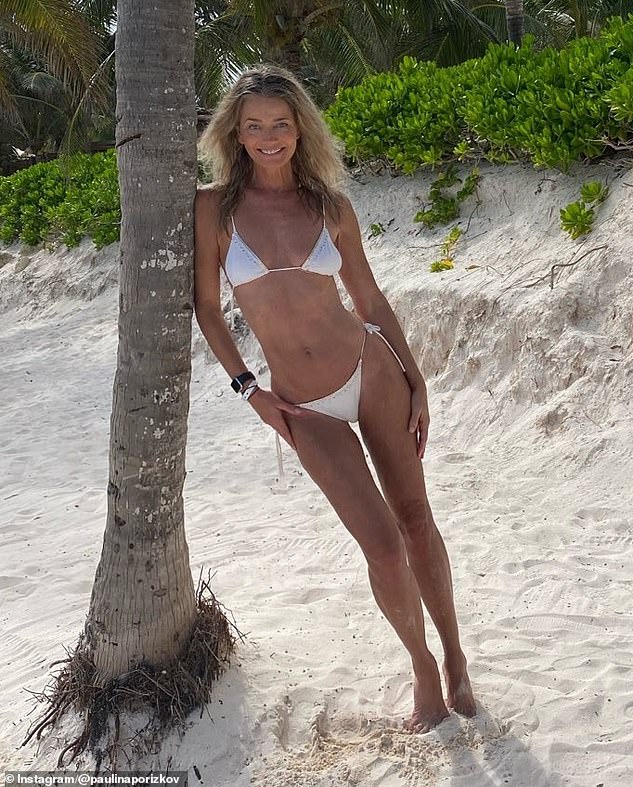 Model behavior: The cover star shared a photo of herself in a white string bikini on last Thursday while documenting her trip 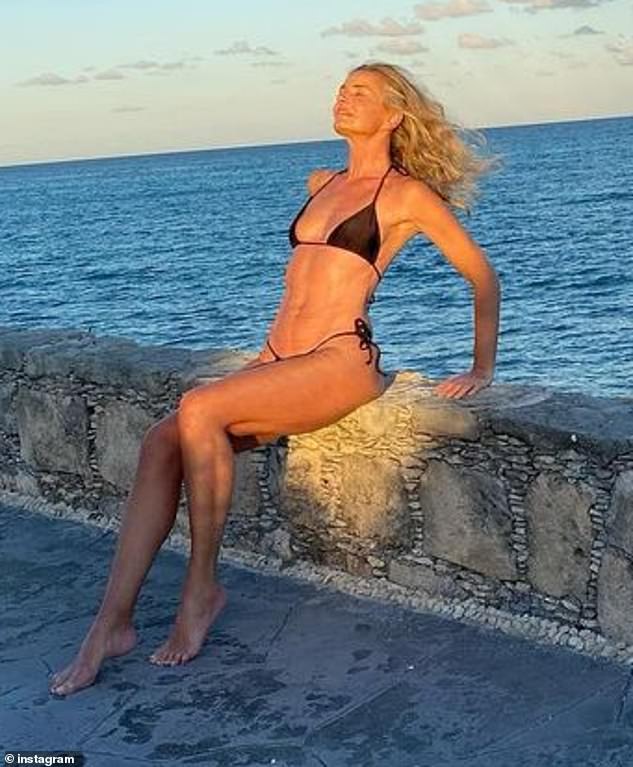 ‘Day one of resort life’: Porizkova kicked off the vacation with a snapshot of herself posing by the water in a black bikini

The Sports Illustrated Swim alum was joined by her friend Martina Forman, and she later shared a picture of them on the beach together, presumably on the last day of their tripsuit.

‘We are both women of middle age: we are both writers and mothers and widows. Every night we put on makeup and dress for ourselves and each other,’ she wrote. ‘No male gaze validation is needed. We feel pretty and we tell one another. Ultimately, it comes down to searching for confidence.

‘We have different ways of finding it, based on our histories. There is no rights or wrongs,’ she explained. ‘There is only the support of each other to be feeling empowered to find our own confidence.

‘This is where I’m hoping we can do better going forward: women banding together for a common cause: equality, and celebrating and respecting our differences instead of knocking each other down. Long live the sisterhood.’