FOX 10’s Steve Nielsen has the latest on two men accused of seriously injuring a Phoenix police officer in an ambush Tuesday afternoon.

PHOENIX , A Phoenix Police detective was hastened to the hospital after being shot several times by two men, the department said.

The incident happened in south phoenix on June 14 just before 12:15 pm near 39th Avenue and Baseline Road, when a detective was conducting a follow-up investigation inside an unmarked car.

“The two men got out of the car with handguns drawn and pulled masks over their faces,” Sgt. Philip Krynsky said. “Through the rearview mirror the detective was able to see the actions of the two males and began to put on her police ballistic vest and draw her handgun.”

One of the men stood in front of the detective’s car, while the other stood outside the passenger door.

Both men then fired 19 gunshots at the car, striking the detective multiple times as she got out of her vehicle.

“Due to her injuries the detective was unable to fire back.” Sgt. Krynsky added.

After the shooting, the two men ran back to their car. The detective was able to call for help over her radio.

The suspects were then found by police at a home near 35th Avenue and Baseline Road where they were taken into custody.

The suspects were identified Wednesday morning as Ahmani Gordon, 22, and Aaron Ware, 22. Both men were booked into jail and are accused of attempted first-degree murder. Their cash-only bond was set at $2 million.

Police said that the detective remains hospitalized. Her name wasn’t released, but she’s a 19-year veteran of the department and her ballistic vest is credited for saving her life. Court documents say it blocked at least one shot.

This was the ninth Phoenix officer shot since last December. 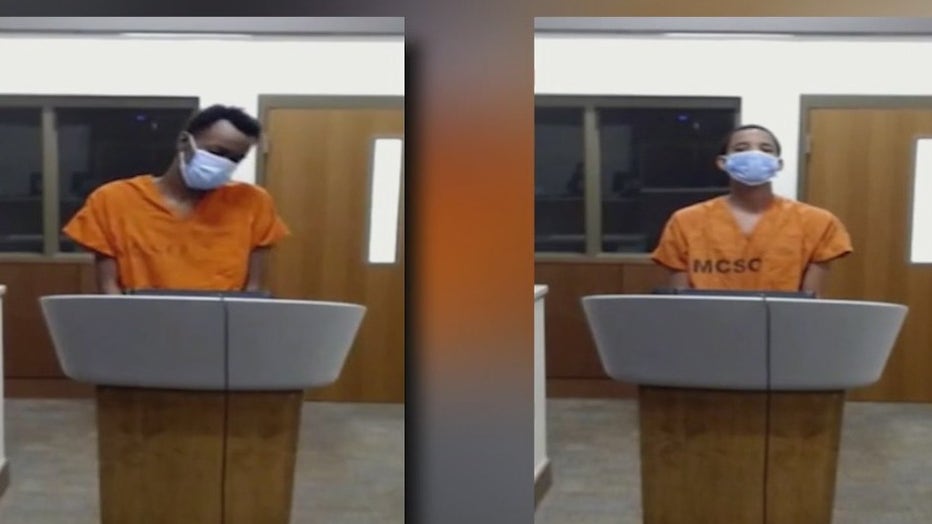 One of them man accused of shooting the officer admitted to firing the gun, but he claims that the officer fired first.

However, the police say the evidence doesn’t back that up.

The detective’s service weapon was never fired, and her shooting hand was hit by a bullet.

At a court hearing on June 15, Ahmani Gordon and Aaron Ware were charged with attempted first-degree murder. Their hearing was originally delayed because they were on suicide watch, but were brought in a short time later.

“This was a coordinated attempt by Mr. Gordon and Mr. Ware to kill a Phoenix police officer,” said Josh Maxell with the Maricopa County Attorney’s Office.

Court documents said she was hit several times in the vest and hand. The suspect car was tracked with a police helicopter, and that’s when the two men were taken into custody.

Ware was reportedly found with bullet casings in his pocket and admitting to firing his gun.

He asked a judge why his cash-only bond was set at $2 million.

The judge explained the severity of the reason against him.

“The bond is set based on the nature of the nature, and the do indicate a deliberate and coordinated event to gun down a person who was wearing a police vest,” the judge said in court. “When people are accused of offenses like that, it tends to indicate there is very little they will not do.”

Ware had claimed to police that he didn’t know she was an officer, but authorities stated she was wearing her vest clearly marked “Police” across the chest.

On June 30, the Maricopa County Attorney’s office announced that Ware and Gordon were indicted on three felony counts, including attempted first-degree murder, aggravated assault, and discharge of a firearm at a structure.

“In the last six months, nine Phoenix Police officers have been shot, and 15 injured,” she said. “Many of these attacks are brazen, and the shooters are often violent offenders with previous felony convictions [sic], The violence against law enforcement must stop.”

Williams said the guns killing Phoenix officers have not been legally purchased, Changes need to be made before any other officers face the same fate, she said.

“It’s creating a dynamic that’s not just impacting the youth and young people in our community, it’s impacting law enforcement,” Williams said. “And sir if I may, you mentioned the trauma that you were recalling as you go to those scenes – imagine being a police officer.”

‘Another sad day for our department’

Phoenix Police Department Executive Assistant Chief, Michael Kurtenbach, spoke at the press conference following the shooting, “I stand before you today, another sad day for our department and our city as another Phoenix Police officer has been shot in the line of duty.”

He goes on to say that Phoenix’s homicide rate is up 24% from this time, last year.

“Homicides involving firearms are up 45% over the same time last year,” Kurtenbach said. He says Phoenix Police Chief Jeri Williams is in Washington DC to testify before the Senate Judiciary Committee on gun violence and its impact on Phoenix. 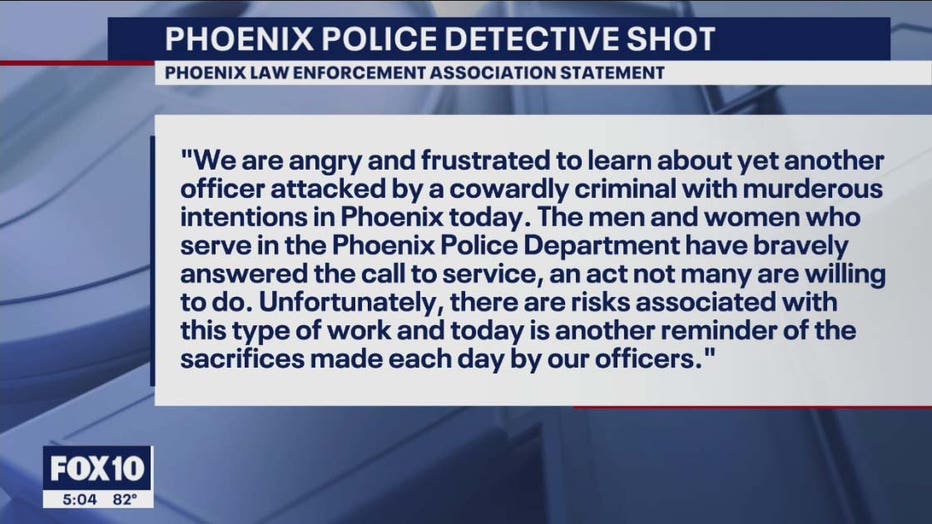 The Phoenix Law Enforcement Association released a statement on the June 14 ambush shooting that left a Phoenix Police detective injured.