With no set intruding on an open stage, chiaroscuro lighting and magnificent music, the West Australian Ballet opened its contemporary season of STATE with a triple bill, each of which display similar themes: those of uncertainty and perplexity, with an underlying frisson of desire for an elusive state of peace.

Galatea & Pygmalion, Choreographed by Li Sze Yeung Justyne and Won Tan Ki, certainly has desire at its center since Pygmalion is infatuated with his statue of Galatea which he yearns to bring to life. The Goddess Aphrodite eventually does what he wishes. The dance opens with Pygmalion (Matthew Lehmann) chipping away at Galatea (Carina Roberts) scantily clad in a slither of white, both under a stark cone of downlight. Roberts’ limbs jerk in on themselves, her torso bends and buckles and spasms until she seems shod with Carrara marble as Lehmann molds her outline and enfolds her in his yearning embraces. Philip Glass’ music shatters around them like broken ice as the pair, sometimes lost in darkness, then harshly spotlit, cavort through their dangerously intense duets. Lehmann and Roberts are superb, creating a dramatic tension that more than does justice to this much awarded choreography.

Australian choreographer Craig Davidson has created world premieres for ballet companies around the world and his With|In|Sight is another for the West Australian Ballet. It focuses on the disparity between moments of chaos and clarity in our existence – apt for our present situation. It opens (and ends) with a smoky, underlit stage and the emerging solitary figure of Juan Carlos Osma who, with his usual technical assuredness and magnetism sets the tone for the following eight dancers. They give a mesmerizing reading of Davidson’s intentions, characterized by rotating duets, sculptured arm shapes, perilous lifts, eye-balling stares at the audience and interested, layered choreography. They are attired in attractive gray and pale-green costumes with touches of cherry red, designed by Alana Sargent, and are almost force-fed in their passionate stage presence by Jonathan Heck’s momentous music. It is visually beautiful, expertly performed and makes a great attempt at trying to define the soul. 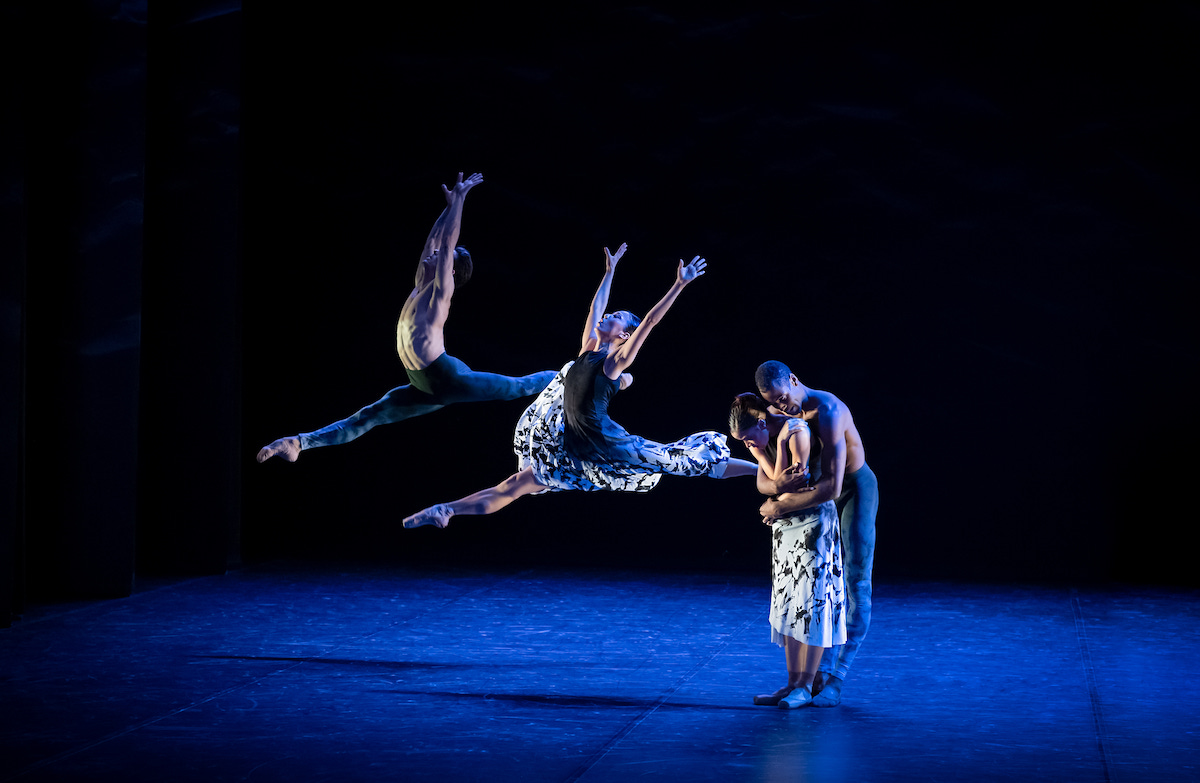 Wanting to depict the fear and unpredictability cause by imminent catastrophe, choreographer Nils Christe chose to set his world-wide hit Before Nightfall, to the music of Czech composer Bohuslav Martinů, who wrote it on the eve of the Second World War. Martinů’s orchestral music is raw and flooded with discordant music and thunderbolts of sound, often emanating from the piano. As such it ideally complements the interplay of mood and character as the 12 dancers display fraught and fearful expressions, clutch their arms around themselves or are propelled like juggernauts towards and away from each other.

Before Nightfall opens with all the dancers aligned on stage – the men topless with dark blue tights and the women in sleeveless dresses, which are dark blue at the top and then patterned in white as they flair softly and voluminously out from the hip (costume designer Annegien Sneep .) Since the women are often thrown upon the shoulders of the men or tossed across the stage to partners, this gives the allusion of future dreams being carried away on the wind. Three extremely difficult pas de deux are performed with utmost finesse by Chihiro Nomura and Oscar Valdés, Kiki Saito and Lehmann, and Dayana Hardy Acuña and Osma. Sneep’s staging of Christie’s choreography makes the movement of dancers, sometimes all dancing pas de deux at once, seem like a marvellous tapestry come to life.

It’s hard not to notice our Premier Mark McGowan’s recent pitch to everyone about the marvels of this State – about which not everyone, particularly politicians in the Eastern States, agrees – but there’s no doubt about The WA Ballet’s STATE. Its sheer grandeur makes it the embodiment of bliss to watch.