An afternoon reveille rang out from Glastonbury’s main Pyramid Stage on Sunday, fluttering high into the summer air above the flags flapping throughout the site. It was Herbie Hancock playing a lengthy but wonderfully limber keytar solo during a rendition of “Chameleon”, from his 1973 album Head Hunters, It closed an evergreen set from the 82-year-old jazz-funk maestro, following in the footsteps of his fellow octogenarian Paul McCartney’s appearance on the same stage the previous night.

Elder worship fits snugly alongside youth culture at Glastonbury. The snuggest fit of all is the so-called “legend’s slot” that takes place at teatime, featuring a venerable grandee from pop’s pantheon: a cosy Sunday service in which worshipful festival-goers sing the words of much-loved hits back at their makers .

This year’s grandee was grand indeed. Diana Ross materialized on the Pyramid Stage after a regal fanfare in a white fur coat and feathery fascinator, a fabulously impractical outfit for a warm day in the Somerset countryside. A vast audience had come to pay their respects to the 78-year-old Motown great, who proceeded to serve up classics such as “Stop! In the Name of Love” and “Upside Down” with a large backing band. It was a benign affair, but shaky too — with some wayward singing from Ross and a setlist that got marooned in the torpor of newer material.

Rumours of surprise appearances ran wild during the festival. Older folk speculated about Kate Bush turning up to celebrate her recent return to the top of the UK singles chart with “Running Up That Hill”. Younger ones swapped fantasies of Harry Styles making an unscheduled visit. In the end, reality brought unbilled sets from everymen George Ezra and Paolo Nutini, an object lesson in managing expectations.

There was a more enticing surprise act at the Park Stage, however. It was Jack White and his band playing a blistering gig ranging from The White Stripes favorites such as “Hotel Yorba” to squealing slabs of noise from his latest solo album Fear of the Dawn, White is a showman of controlled chaos and his voice teetered at the brink of hysteria, while his guitar amp was pushed to its limit by shrieking solos and vast juddering riffs. 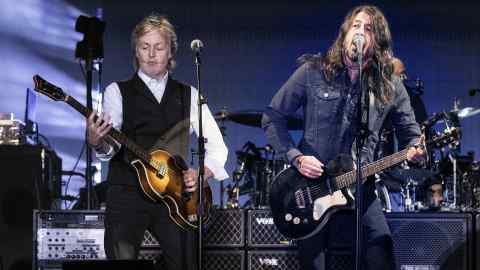 One particular guitar part was bellowed back at him note for note in the final track. The melody of The White Stripes’ “Seven Nation Army” has become a folk chant in the UK, a tune for praising people’s names. “Oh, Je-re-my Cor-byn” was the original, coined during the former Labor party leader’s brief period of Corbynmania. Alas, cruel fame, fickle mistress of destiny — Corbyn’s name has now been expunged from the chant, replaced by other idols.

Kendrick Lamar is one of them. The US rapper found himself being serenaded with the chant by tens of thousands of festival-goers in the middle of his festival-closing set on the Pyramid Stage. The chorus of “Oh, Ken-drick La-mar-ah” continued for about a minute. The Californian took it in, unsmiling, nodding, before giving a respectful bow. Then he returned to delivering what will be remembered as one of the great Glastonbury headline performances.

In keeping with his status as US rap’s most audacious star, the staging was choreographed as modern dance rather than a conventional hip-hop show. An ensemble of male dancers wore white shirts tucked neatly into black trousers. Female dancers wore flowing red chiffon outfits. All of them were dark-skinned. A white-shirted Lamar wore a silvery crown of thorns. The Jesus reference was not intended as Messianism. Rather, it was an emblem of African American suffering, forgiveness, humility and the need to guard against false gods.

He rapped some of the songs alone, while others featured the dancers making stylised moves around him. The opening track was “United in Grief” from his latest album. Its mix of fast beats and abstraction threw down a challenge — although early outings for crowd-pleasers such as “mAAd city” and “King Kunta” showed an entertainer’s nous amid the high art. The atmosphere in the audience was electric, with lit flares, people hoisted on to shoulders and lyrics recited word-for-word. 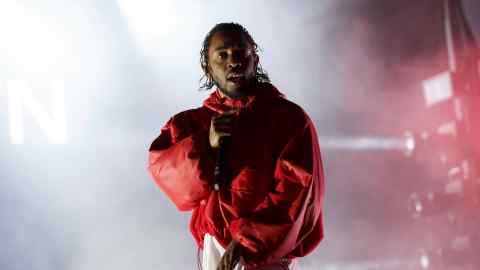 Music was partly live and partly pre-recorded. The real musicianship lay in Lamar’s vocal performance, a next-level display of verbal profusion. Words poured forth from him, rapped with technically skilled turns of pace and diction. The songs’ narratives mixed personal and widescreen accounts of black American experiences — relatives lost to violence, racism, hip-hop culture, the worldly temptations of fame — all joined together like the rhymes in Lamar’s raps.

A further act of synthesis came in the closing track, “Savior”. The white, black and red coloring of the dancers’s outfits came together in the dramatic form of stage blood spreading over Lamar’s shirt and pouring from the crown of thorns over his face. Framed by a static tableau of dancers, he ended by chanting “Godspeed for women’s rights”, a reference to the assault on the flesh-and-blood of women’s bodies by the overturning of US abortion laws.

The chant got louder and louder, and then ended with the clatter of a mic drop and the rapper’s abrupt exit. There was an awed silence. “Is that really the end?” someone near me asked. Yes, it really was — with a knockout blow.