TRURO, NS — It was a bell Beyond Boxing Club owner Ted Ash didn’t want to ring.
The June 11, 14-fight card, aptly titled The Finale, marked the last activity for the club, which started Sept. 4, 2018.
“Almost four years ago,” Ash said of the club’s tenure, a couple of days before the card and as he and club boxers carried on business as usual at the downtown Truro club.
A disappointed Ash agreed it amounts to saying goodbye to dear friends.
“On my goodness, I’m really sad, upset about it,” he said. “This is like family to me. You get to build relationships with everyone and that is what I wanted. You could go to a regular gym, but nobody really knows who you are. You can run on the treadmill and stare at the wall, but here, everybody knows everybody. We know what they do outside the gym… everyone is like family.” 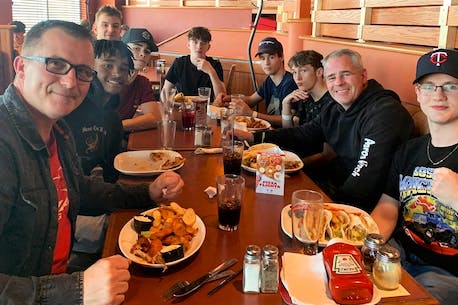 “It’s a really good feeling when you come here. Nobody necessarily wants to be running on a treadmill, but when you come in here, you have someone standing behind you going, ‘come on, go harder,’ all the time. It’s like a room of personal trainers … teammates.”
The decision for Ash was the realization he was trying to juggle too much of a load for one person.
“From the fundraising to the coaching and everything like that,” he said. “It’s really hard to find people who can commit to the time it takes to do it right and to do it by yourself, it just takes a lot of work.”
Ash said he has been fielding calls about staying involved in the sport, but he is going to take a couple of months to focus on himself before deciding his next move.
“Calls from people wanting me to (stay involved), but my health hasn’t been very good lately,” he said, adding he couldn’t afford to take a time-out and still maintain the club’s location in the Truro Centre.
“So I have to shut down and take a couple of months to work on me, then we’ll see how I feel,” he said.
“I’ll do some mountain biking and, maybe, post some things and put on the odd class here and there, for no fee,” he said. “Something to do to get me out of the house and keep people interested. We’ll see what happens the fall for me, both mentally and physically.”
Ash repeated the best part of running the club was the relationships he built.
“We went on a few trips; to Alberta, Maine, Ontario, and we’ve been all over Nova Scotia and New Brunswick,” he said.
“That’s where you get to know the kids, when you’re driving them down the road and there is nothing else to do. I’m pretty social, so I would be asking, ‘how are you doing, how is school?’ You build those relationships, so if I’m in the mall to get something and I see one of the kids, they’ll come running over and they’re all smiles.”

Audrey Ross, who had her first fight during The Finale, is one of those young boxers.
“I think he is great, one of the best coaches I’ve seen, and I’ve really enjoyed working with him,” Audrey, who made the transition from martial arts to boxing, said. “And all the people are nice and helpful.”
Her mom Lorraine talked about the positive impact of Beyond Boxing on her daughter.
“It has been fantastic for her self-esteem and the camaraderie … the friendships she has made,” Lorraine said. “And she absolutely adores her coach; he has been great with everyone.”
Lorraine said it’s sad to be talking about the club closing.
“We’re hoping more support might come forward and he’ll be able to do more in the upcoming years, but he has already done great for all the kids,” she said. “And you can tell, the kids always showed up, even during the pandemic.”
Audrey said she is going to take some time before deciding if she’ll continue in the sport without Beyond Boxing.
“I’ll wait and see if Teddy opens up again, and we’ll go from there,” she said.
Boxer Daryen Reddick is in the same wait-and-see mode.
“I’ll take the summer off and then see if he’ll come back, or then explore other clubs, coaching,” said the former basketball player.
He talked about trying boxing and the wise choice of joining Beyond Boxing.
“A friend of mine was coming here while going back and forth to different clubs. I watched boxing my whole life and thought, I want to try it. I used to play basketball (former CEC Cougar), but I don’t play anymore, so I thought, I would try this. I came here near the end of July, early August of last year … sometime around then.”
Reddick called it a “super” environment.
“It’s a great place to build friendships … it only took me like two days. Everyone was super friendly.”
And that is what he’ll miss most with the club no more.
“The people – the new friends I made – even though they’re younger than me. Everyone is fun to be around and coach (Ash), he has 100 per cent, changed my life. I couldn’t box for nothing when I came here… now, I’m not too bad.”