Some say 3D anime action isnt dynamic. Then there’s Kengan Ashura, There’s a reason this series has gained such a dedicated following for its brutal and kinetic fights — the manga it faithfully adapts was written by Yabako Sandrovich, a real-deal martial artist. Like the late, great Sonny Chiba performing karate in a 70s Toei action movie, Sandrovich and his illustrator Daromeon meticulously constructed Kengan Ashura‘s fights in the original manga, drawing from experience and study in the field of martial arts from around the globe.

Martial arts have been a major element of plenty of anime over the years, and have left a lasting imprint on the medium. Fist of the North Star famously drew from Chinese kung-fu to create one of the foundational series of 80s anime, filled with over-the-top violence and musclebound experts in martial technique. Those same descriptors can easily be applied to Kengan Ashurathe smash hit manga written by Sandrovich and drawn by Daromeonlater adapted into a popular Netflix-distributed anime series by director Seiji Kishi and Larx Entertainment that stays remarkably close to the original material. 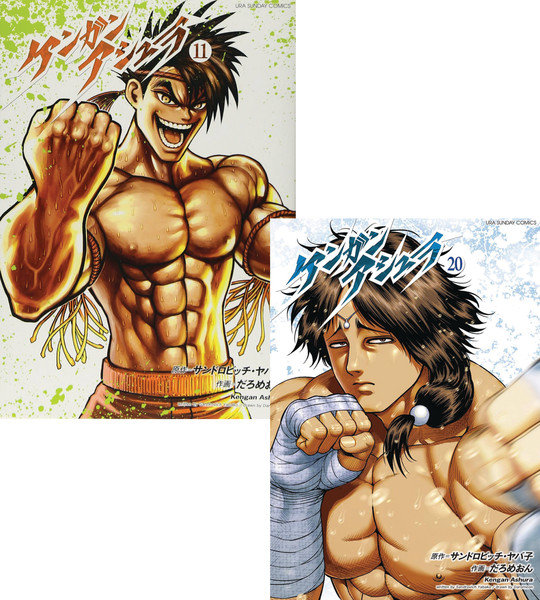 Yabako Sandrovich is an interesting guy. One of his former stints before writing manga, which also includes the slice-of-life sensation How Heavy Are the Dumbbells You Lift?, was as a ruins excavator. More relevant to Kengan Ashurahe also has at least fourteen years of martial arts experience.

In the world of Kengan, international companies conduct business by employing fighters to enter a secret tournament of the world’s deadliest fighting styles. Not only is the selection of martial arts from around the globe on display a veritable buffet for fight technique connoisseurs, it comes from a background of understanding what makes them work. Let’s dive into some of the series’ main combatants and take a look at the way they fight. 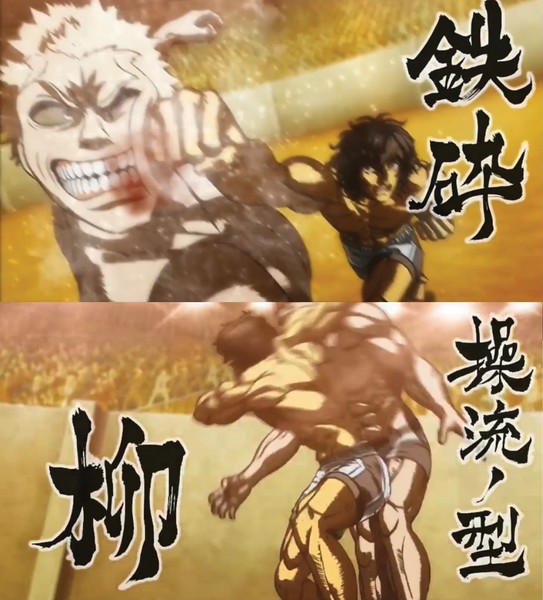 The basis for the mixed martial art fighting style practiced by the main protagonist Tokita Ohma is a combination of two of the most popular and widespread Japanese martial arts — karate and jiu-jitsu. Developed by the Ryukyu kingdom in Okinawa, karate is known for its sudden, explosive strikes that release pent-up force in the form of powerful punches and kicks. Jiu-jitsu originates from the Honshu mainland, and focuses more on using the opponent’s momentum against them, redirecting their attacks and movements. The exact style Ohma uses that fuses these practices is the fictional “Niko Style” of Sandrovich’s own invention, named after the famous town in Tochigi Prefecture. The Niko Style applies secret techniques to the standard karate-based punching and axe-kicking that Ohma regularly performs to unleash a variety of superhuman abilities, and in the spirit of jiu-jitsu, to turn the enemy’s own attacks back at them. Not only are the types of moves from these two Japanese martial arts depicted properly, but their core ethos are both intact in this new fantasy-tinged mashup. Like Fist of the North Star before it, Kengan Ashura has taken real martial arts and added a layer of prowess that only a manga character could possess. 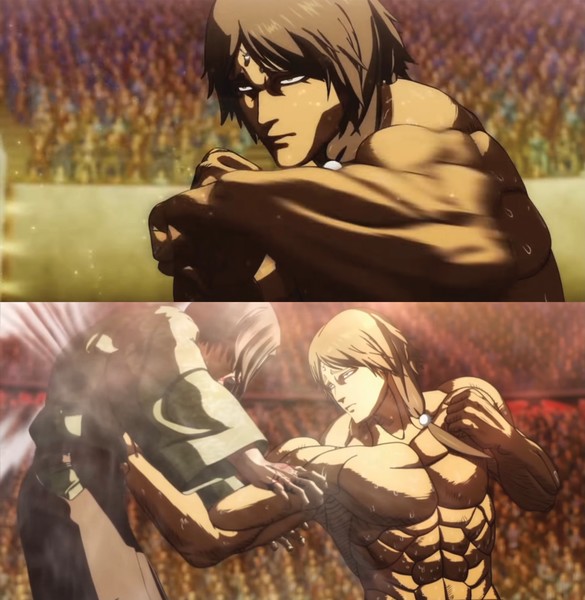 Various styles of karate and jiu-jitsu form the basis of several other major characters’ chosen disciplines, but let’s head south to take a look at a fighter from Thailand, the home of another world-famous fighting style — Muay Thai. Kaolan Wongsawat is known as the “Thai God of War” in the world of Kengan. His moves incorporate the straightforward punches of western boxing, but are mainly based on Thailand’s native martial art that dates back to before the 16th century. Using a combination of kneeing, jabbing opponents with elbows, and delivering slamming kicks with one’s shins, this close-quarters style has become a favorite of MMA fighters and was popularized in world cinema by the blindingly fast athletics of actor Tony Jaa. Kaolan’s superhuman prowess with Muay Thai and super-fast “flicker” jabs make him a dangerous man for any of the tournament’s entrants to get near. 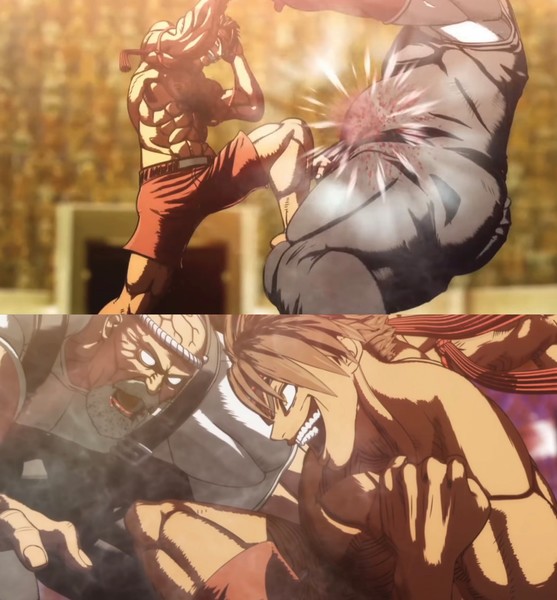 Staying in Southeast Asia, let’s look at the martial art practiced by boisterous character Saw Paing from Myanmar. Lethwei is a brutal type of bare-knuckle boxing originating thousands of years ago in ancient Myanmar’s Pyu Empire, used both for sport and warfare, and still practiced to this day. According to Sandrovich’s author’s notes in the back of a manga issue featuring Saw Paing, he’d heard through martial arts circles that lethwei fighters from Myanmar were especially strong, inspiring him to create the character. Saw Paing’s exuberant personality balances out the annihilating techniques he uses, making him a likable fan favorite.

Crossing the Pacific, we arrive in Brazil, a country home to a sizable population of Japanese immigrants. This cultural exchange resulted in Brazilian jiu-jitsu, the basis for the style used by Kengan character Imai Cosmo. Cosmo’s reputation as the ‘king of stranglers’ comes from a grappling-focused aspect of the Brazilian style’ The difference from the original Japanese jiu-jitsu is that the Brazilian style focuses more on grappling with your opponent once you’ve gotten them into your desired position, putting them in a chokehold or lock. It’s this method that allows Cosmo, a smaller fighter, to overpower larger adversaries. 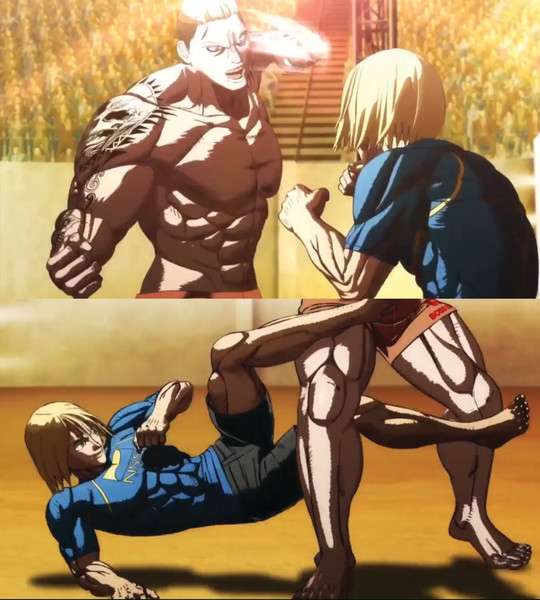 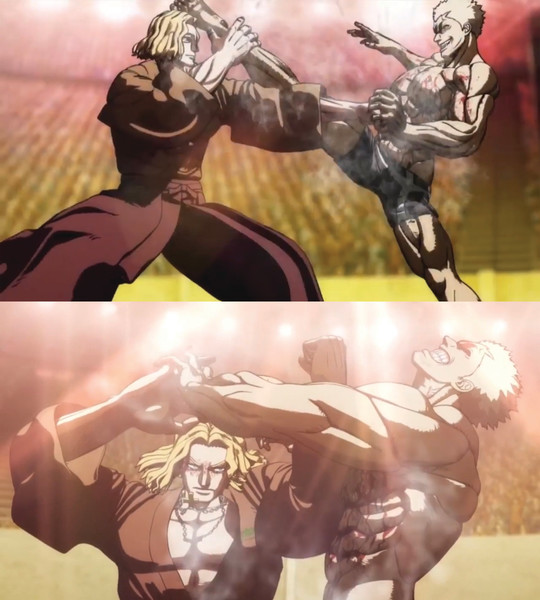 Hailing from England, Mokichi Robinson uses Bartitsu, an archaic British martial art. Yes, there was a martial art developed in England in the Victorian era, though it’s fallen into obscurity and is now most widely remembered via a misspelled reference to “Baritsu” in one of Arthur Conan Doyle‘s Sherlock Holmes novels. Its real-life inventor was an Englishman named Edward W. Barton-Wright who visited Meiji-era Japan as it newly opened to the West and became enamored with Japanese martial arts. Barton-Wright modestly named Bartitsu after himself, combining his last name with “jiu-jitsu”. It was a mixed martial art incorporating the aforementioned Japanese style, western boxing, French Savate, and others. Robinson’s use of it is a deep cut, showing the type of research that went into his creation. 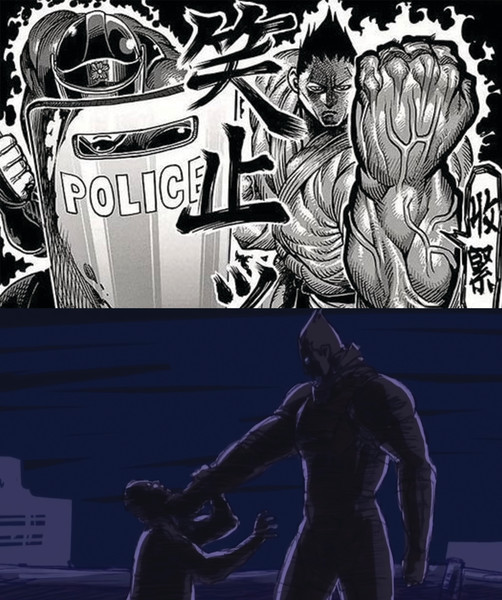 Returning to Japan, we find one of the series’ darkest characters, former police officer Akoya Seishu. Akoya uses taiho-jutsu, literally “the art of arresting,” a restraining-focused martial art taught to Japanese police officers. While the use of taiho-jutsu is intended to be a non-lethal subduing alternative, Akoya’s personal extremism lead him to warp it into a deadly execution technique. Police brutality is a loaded subject, and Kengan Ashura barrels headlong into it via one of its most horrific characters. Is there a thinly-veiled subtext? Is it pure exploitation? Whatever the case, Akoya stands as one of the more thought-provoking characters in the series. 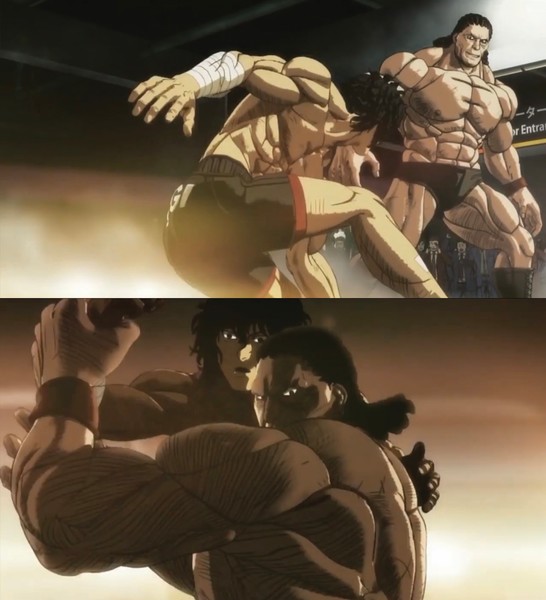 On a lighter note, the “fighting style” of professional wrestling as used by charismatic fan favorite Sekibayashi Jun is (sorry to burst everyone’s bubble) not real. WWE-style wrestling is described by that organization itself as “sports entertainment,” a scripted form of theater that uses the illusion of fighting to tell a story. In the world of Kengan Ashura, Sekibayashi is able to successfully hold his own against world-class fighters using methods that would not work in reality, which shows Sandrovich’s true attitude toward all of this. Fighting technique is important, but what’s more important is the entertainment for the audience. Kengan Ashura is a world where you can suspend your disbelief that a pro wrestler is really fighting and really winning against people trained in deadly martial arts styles. It’s a fantasy that incorporates just enough reality to be dynamic and interesting, but is heightened and purposely ridiculous in a way that watching an MMA match can’t give you. Yes, there are unrealistic things in Kengan Ashura, and a martial arts aficionado like Sandrovich knows that. He’s put them in there because a character like Sekibayashi is fun—and by extension, so is this wild and entertaining series. 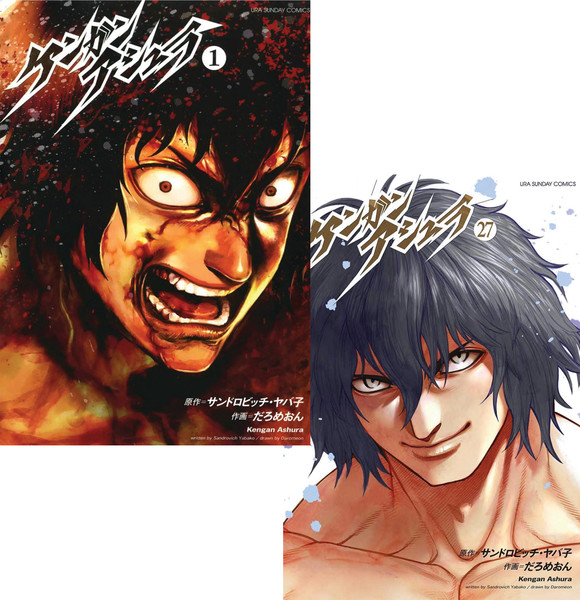 At the time of this writing, a long-awaited third season of the anime has been announced to finish adapting the manga’s original run. It’s been a few years’ hiatus, but martial arts are timeless — and the manga is well worth reading in the mean time. However its narrative and aesthetics become over-the-top and insane, Kengan Ashura was born and thrives on a reverence for the world’s fighting styles in any form, a respectful celebration of martial arts and their appeal as much as a fantastic exaggeration of their entertainment value.

Raffael Coronelli is an out-of-practice First Dan Black Belt in Taekwondo, author of How to Have an Adventure in Northern Japan, Daikaiju Yuki, and other books, and has contributed essays to blu-ray releases from Arrow Video, Follow: @raffleupagus