Click for details on how to register a team. There will be no charge to come watch the action.

A reminder out from the City of Everett today that time is running out to register for the inaugural 3on3 Basketball Tournament coming to downtown Everett, Washington on July 9th and 10th.

If you register by June 20th, you can save $20.00. All participants must register by July 1st. Teams are made up of 4 players and each team will play at least 3 games. Teams can be mixed gender and there is also a wheelchair division which is free to enter.

The event will include contests, food trucks and lots of fun activities for spectators of all ages. The McClain Insurance Slam Dunk Contest will take place on Boeing Center Court and attendees can participate in the Funko 3 Point Shot Contest and Everett Downtown Storage Skills Challenge. The event is free for spectators, and all are encouraged to attend. 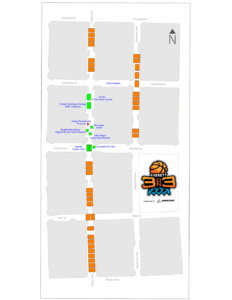 Everett 3on3 will take place on the streets of beautiful downtown Everett. Boeing Center Court will be at the intersection of Colby Ave. and Hewitt Ave. Click graphic to enlarge.

The tournament, presented by Boeing, is a joint effort between Eventuris and the City of Everett.

Here’s a brief description on how the tournament will work:

TOURNAMENT FORMAT & AWARDS
Youth, Teen, & Adult Division Teams: Teams will be placed into brackets, or groupings, based on their team characteristics, including: each player’s gender, height, age, and playing experience. Teams will receive no fewer than three scheduled games. The tournament will begin with pool play within each bracket. Based on a team’s pool play record and other qualifying factors, including tiebreakers, teams may then advance to a seeded single-elimination playoff on the tournament’s second day. The two teams advancing all the way through the playoff will compete for the Bracket Championship. Players on the Champion and Finalist teams in every bracket will get awards for their achievement.

Elite Division Teams: In the Men’s and Women’s Elite Divisions, teams will be placed into gender specific brackets regardless of each player’s age, height or playing experience. Depending on the number of teams, there may be multiple brackets in each Elite Division. Similar to other Divisions tournaments, the Elite Division tournament will begin with pool play within each bracket. Based on a team’s pool play record and other qualifying factors, including tiebreakers, teams may then advance to a seeded single-elimination playoff within each bracket. The winners of each of these bracket playoffs will then compete in an overall single-elimination Division Championship.

Each team will be scheduled for at least three games. Participants can learn more and register their team, or sign up to volunteer, at everett3on3.net.