This past spring, the Georgetown Heavyweight Men welcomed longtime coach Tony Johnson back into the launch to guide them for the spring season. As noted in row2k’s IRA Coverage, Johnson’s last campaign was a successful one, as the Georgetown Heavy Four came away with a medal. You can read that interview here.

In the weeks leading up to the IRA, row2k sat down with Coach to get his thoughts on what it felt like to be back behind the megaphone.

Johnson started rowing at Washington-Lee High School, under Charley Butt, Sr., then rowed collegiately at Syracuse, and competed twice at the Olympics in the Men’s Pair, winning silver at his second Games with Larry Hough in 1968. He also served as an Olympic coach in 1972.

row2k: Can you talk to us a little bit about what it’s been like to be back in the launch this spring?

Tony Johnson: My first realization of what I was into was actually not in the launch, but in the in erg room, and at that point, you know, it’s just five days a week, so eight hours a week. So it was it was pretty easy, physically. [Once we were on the water] there was definitely a bit of difficulty on my part of adapting to the six days a week, early in the morning, and then come back for a couple of afternoon sessions [laughs],

But in the erg room, I realized I felt energized. I felt like there was something of my [coaching] mindset: teaching, learning names, learning people, learning who they were. It’s a really nice group of guys, a very willing group of guys. They listened. They tried. There’s been resistance to it, and there’s old habits that have been shown up, for them and for me. But the first thing that I think about, I remember very clearly was just how energized I felt. Some of that, I suppose, is coming off a couple of years of pandemic where I didn’t do a lot, but also it was being awfully retired and not having contact with crew on a regular basis. So it was good fun. I enjoyed it. At the very beginning, I enjoyed it. There has been a side of it that’s been tiring: you have to got to work and it’s relentless [laughs], You leave a morning practice and you go home and there’s all these damn phone calls and emails. But anyway, I did find it energizing.

row2k: Over time, as you look back over the scope of your career, has that stuff, that office work piece, outside of the launch changed?

Tony Johnson: I don’t know how much has changed. I think the older I get the less tolerance I have for the rest of that stuff [laughs],

But there are new and different issues that come up now, problems that the kid might have of any sort–related to rowing and not related to rowing, and there’s a lot of eyes on what the athletes are doing, and a lot of those things then go back through.

And there are more rules. I’m thinking of some of the issues that came up and, some of it was certainly understandable, especially in this day and age, and some of it was just a pain in the butt, but you have to deal with it, and can ‘t just use a reliance on thinking, “Well, this is the way I used to do it. And so I’m still gonna try and deal with it in the same fashion.”

The sport is the same, the rowing is the same. There are things I wanted to learn. I thought, “Well, I’m gonna learn more of this new technology” — the GPS to boat speed and all of that, and some of that’s fun. Helpful, for sure.

row2k: With some of that with some of the new technology, do you find that it is confirming what you see by eye? After all you’ve been coaching on this river for a long time. 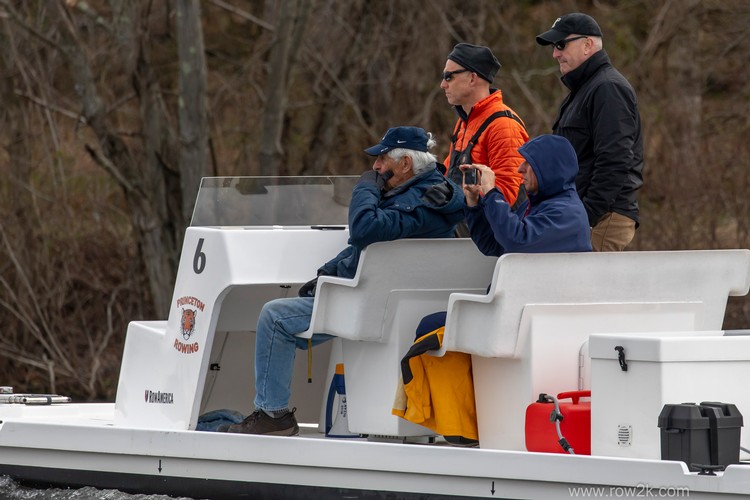 Tony Johnson: It’s interesting that you ask it that way because what I find is my eye is still the most reliable tool that I have. I have a feeling that perhaps there are some people who pay so much attention to the data that they forget that you’ve got to be rowing well. Rowing well is work, it’s pulling, it’s drive. Technically, we’re looking for perfection, and I guess, without tooting my own horn, I do find that I do rely on that: what I see.

I also found, stepping in mid-year that I’m probably at my best the better I know the athletes, and that means a longer period of time than I’ve had with this group. If you start in September, then by January, by March, you’ve spent a lot of time with the guys. When you’re starting in January, you tie an arm behind your back: it’s just a little bit harder…to pick a stroke, to pick a stern section, I didn’t have that background. So I’d be asking others. “Oh, you stroked your freshman year?” Yeah, maybe I ought to try that. I was at my best as a coach when I knew that people well, and I understood that that was a problem I had to deal with this spring.

row2k: Because you didn’t have enough knowledge or experience of those intangibles within the group?

Tony Johnson: Absolutely. It’s that value of keeping a log, so you can look back and say, “Oh, we had a good four a couple of weeks ago: who was in that four? Maybe I should pay more attention to that lineup.” Absolutely. All of those things would help but the importance of “knowing people well” is one way I would phrase it.

row2k: Can you talk reflect a little bit on the scope of time that have you spent coaching on the Potomac, or really on this river period? It goes all the way back to high school at Washington-Lee under Charley Butt and then training here in your pair with Larry Hough for the ’68 Games as well, right?

Tony Johnson: Yeah, there’s a familiarity with the river, with the program, with Georgetown. And part of my style is all those things that pop to my mind over time: good rowing, mistakes, problems, how I dealt with situations, and that’s over a lot of years now.

row2k: Tied to the river, to this place?

Tony Johnson: Absolutely, to the Potomac. It’s all valuable memories.

row2k: What has the best moment been for you, since you’ve been back with the program this spring?

Tony Johnson: That’s hard to say: it’s a smaller squad–20 rowers, three coxswains, very young: a lot of freshmen and sophomores. I did realize at the very beginning that there’s almost no distinction between freshmen and sophomores at Georgetown on crew this year. The sophomores, almost to a man, were not on campus freshman year. And so they were first year in college, first year rowing, first year everything, even though they were a hair older. That was half of our squad, but some really good guys, and good people, too. They’re appreciative, which was nice, fun. Parents were appreciative and were supportive, that was good.

And so it’s been fine. I wish we’d gone faster. I felt for a long time that we were behind: getting ready for the first race, when we were two days out, I’m doing things that we should have been doing six weeks out. There was a little bit of catching up the whole time, and that that continued right to the end of the year.

I thought that crew at the end of the year was a decent crew, and yet we’re at the back of the pack of the Eastern Sprint league, and that’s that’s distasteful from a competitive point of view and hard for the guys.

row2k: Do you feel that Eastern Sprints is a faster regatta thank it to be used, as you look back over the sweep of years that you’ve raced there?

Tony Johnson: The depth of competition is enormous. I think I knew, from a while ago, that second and third boats were so much faster than the 2V and 3V of old, and to see the 4V’s and 5V’s and what they’re doing, that’s wonderful. It is competitive. A high standard.

When this year’s crew went out, they raced hard and they put it on the line, and you know that at least we got that much done and that was good. Both crews did that at The Sprints; they were back in the pack but they at least saw that they really dug in.

I’m dealing with that again now with the four for the IRA. It’s a decent four, but we still have some issues of how can we do really well.

row2k: And that fours event can often be wide open.

Tony Johnson: Yeah, well, let’s hope that it is. 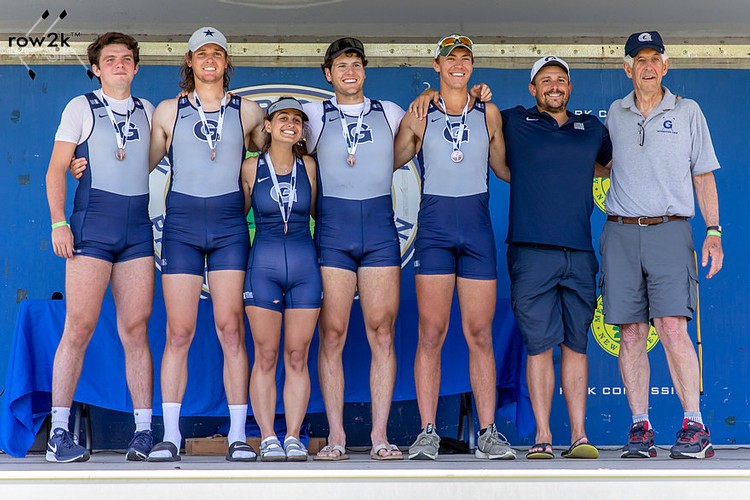