After the Webb Center received a $2,000 grant from the Wagner Foundation, a partnership they formed with Ouachita Children’s Center and the Garland County Master Gardeners led to a vegetable garden project behind the OCC building.

“It was indicated to us that the OCC needed some vegetable boxes down here,” said James B. Moore Jr., who has been a master gardener since 2012 and serves as a board member at the Webb Center. “So I got together with some of the ladies and brothers of the Master Gardeners and we decided to come down and do planter boxes for OCC.”

The group built four garden beds, adding to the two already established boxes at OCC, and installed an aboveground irrigation system to water the garden.

Some of the students helped with the garden beds’ installation on Monday, Moore said. The garden is now growing vegetables and fruits including watermelon, pinto beans, peppers, okra, black-eyed peas, and tomatoes as well as marigolds.

“Marigolds are designed to attract the good bugs and keep the bad bugs away,” Moore said.

“When Mr. James came to me with the idea and said that he would like to get the kids out and get them involved, it was a ‘Yes’ right away,” William Wilson, executive director of OCC, said. “And then not only that, the children enjoyed it. They really did. (It) gives them something to do. Quite a few of them asked questions. They were excited about it and that’s what matters.”

“When everything starts growing, we are hoping that they can utilize the food, the black-eyed peas, string beans, pinto beans and tomatoes, to help feed the students here at OCC,” Moore said.

Not only will the garden provide food, it was also able to provide knowledge and experience for the children at OCC, Wilson said. Jodi Tooke, president of the Master Gardeners, said part of their mission is educating the community about horticulture.

“If just two or three remember this day in time and really understand the horticulture part of it, it’ll be a blessing to their families and to themselves,” Wilson said.

“I think there’s a lot of benefit to it beyond just their learning about gardening,” Tooke said. “We, of course, want to encourage that so that young people will carry on the tradition of gardening and get from it what we get: that sense of accomplishment, that sense of peace, of unity with nature.”

With about 200 members in the county, each Master Gardener receives 40 hours of initial training and horticulture practices from the University of Arkansas followed by 20 hours of community service each year.

Moore said he hoped the Master Gardeners would have the chance to return later in the year and plant fall and winter garden vegetables including lettuce, radishes and cabbage, noting it’s possible the garden will expand someday by adding even more garden beds.

The garden beds behind Ouachita Children’s Center are growing vegetables and fruits including tomatoes, watermelon, black eyed peas and okra. – Photo by Courtney Edwards of The Sentinel-Record 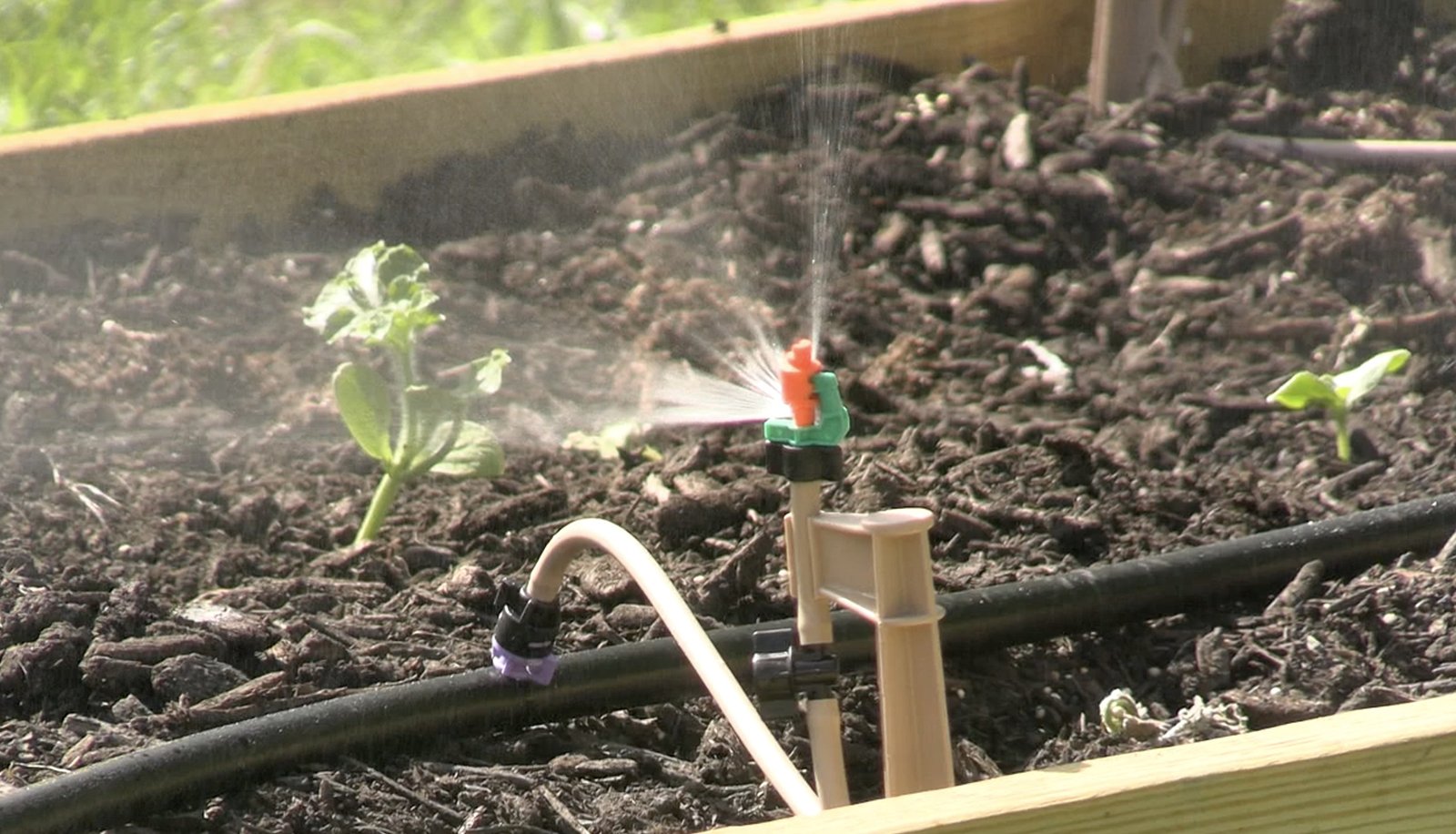 The master gardeners also installed an above ground irrigation system to water the plants. – Photo by Courtney Edwards of The Sentinel-Record 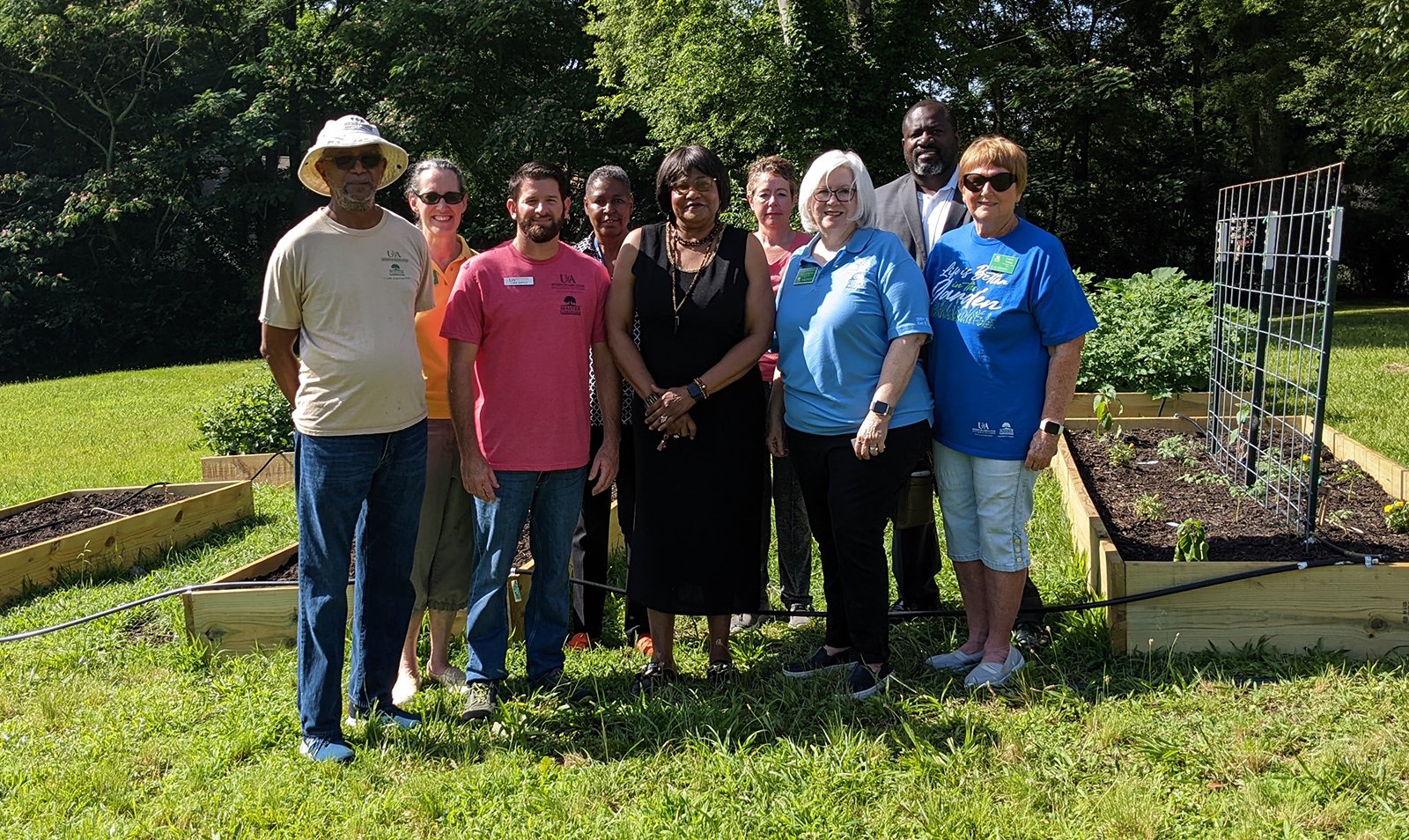