Handball is a common-sense thing.

If a player gets hit on the hand from a close distance: no handball. Fair.

If a player moves their arm towards the ball to block it: handball. Sensible.

If a player uses their arm or hand to score: handball. Pretty straightforward.

If a player uses their shoulder: no handball.

Well, historically, the handball laws have been unclear.

The International Football Association Board (IFAB), the body that determines the laws of football, and the Football Association have updated their rulebooks on several occasions in recent years to try to remedy this. Before this season began, there were several alterations in English football concerning handball violations.

For example, last season, a goal would be disallowed if the creator or scorer was adjudged to have handled the ball, whether intentional or not. Now, these rules apply exclusively to the scorer.

The new law came into focus when Duncan Watmore was seen to have handled in the build-up to Middlesbrough’s equalizer against Manchester United in the FA Cup last month. After the ball hit his hand inside the United penalty area, he passed across the box for Matt Crooks to score.

As Watmore did not get the final touch, the goal was allowed. United argued it was a clear handball and that the goal should not have stood.

The dubious handball laws were called into question again the following weekend, when West Ham United’s Craig Dawson scored in stoppage time to rescue a draw away to Leicester City.

After centre-back Dawson met a corner to score his 50th senior goal, goalkeeper Kasper Schmeichel immediately raised his hand. With Dawson having only centimetres away from him, Schmeichel was shocked referee Michael Oliver had not blown his whistle. 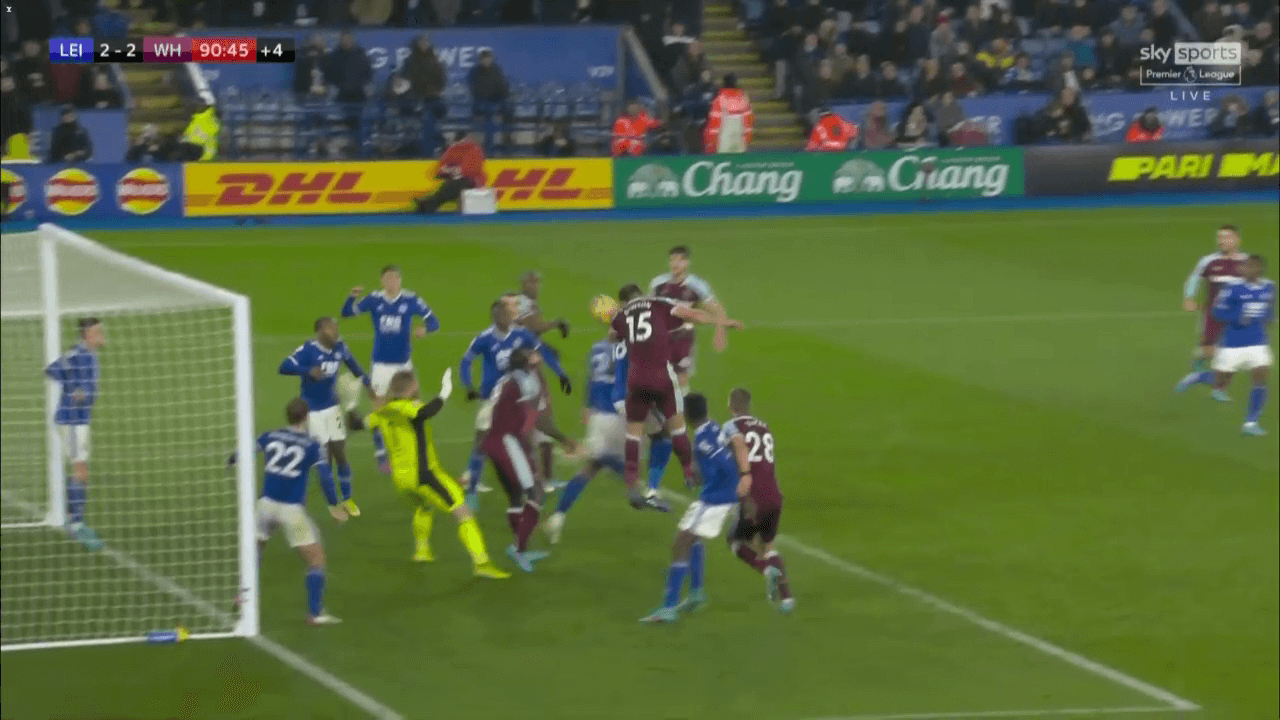 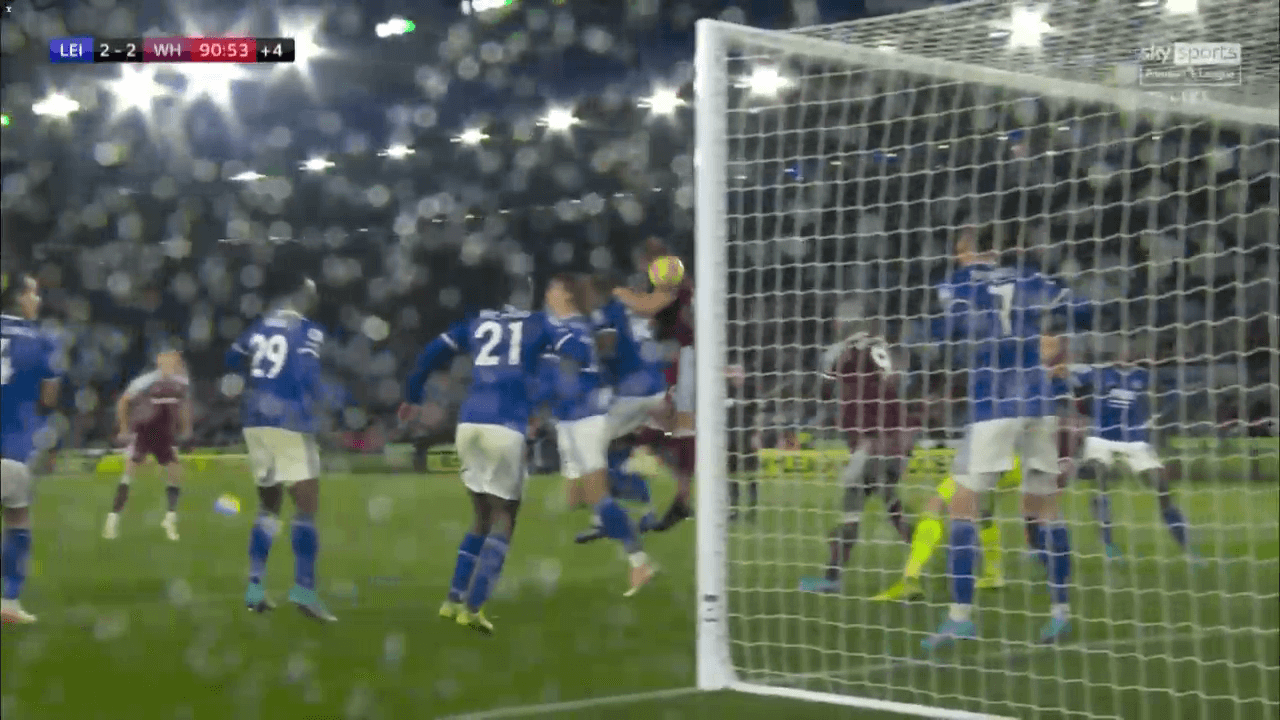 VARs were introduced to eradicate clear and obvious errors.

The replays showed the ball had hit Dawson’s upper left arm at the level of the cuff on his short-sleeved shirt. Several minutes passed between the ball going into the net and the restart, when the VAR, Chris Kavanagh, confirmed he had completed the check, and the goal stood. The match finished 2-2.

When asked if he was concerned VAR would disallow the goal, Dawson replied, “Yes, slightly worried. But it counted and that’s all that matters.”

When Laurent Koscielny used his shoulder to score, sealing a 2-0 Arsenal win over Chelsea in January 2019, he proudly admitted in the post-match interview that he had been “practicing his shoulders”. But, contrary to popular belief, where handball starts on the arm had not been defined before 2020. In other words, by law, the use of the shoulder was also illegal. 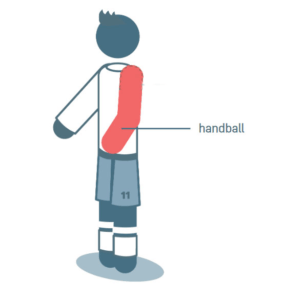 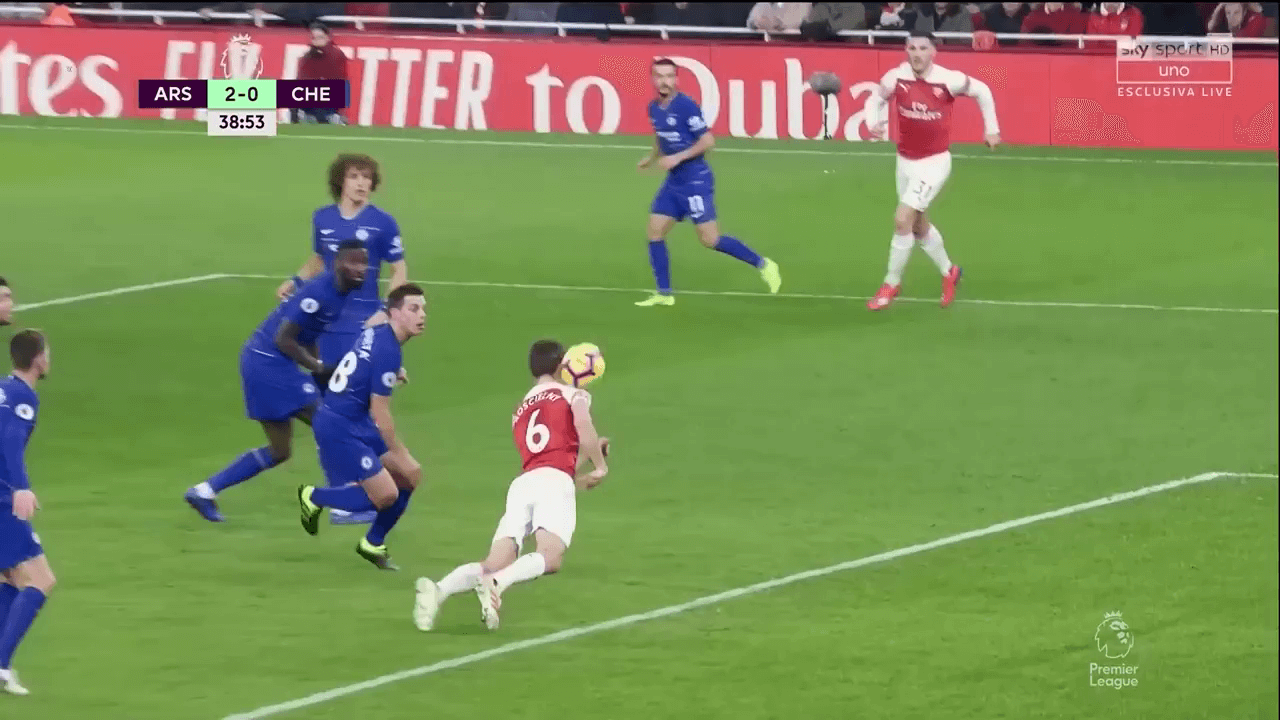 Use of the shoulder in football was broadly accepted through convention, though it was officially against the rules.

This murky framework came into disrepute when Aston Villa defender Tyrone Mings gave away a penalty against Leicester in March 2020 by using his shoulder to block a ball, prompting the change of law before the following season.

At that point, the decision to award a penalty for this was in line with guidance. 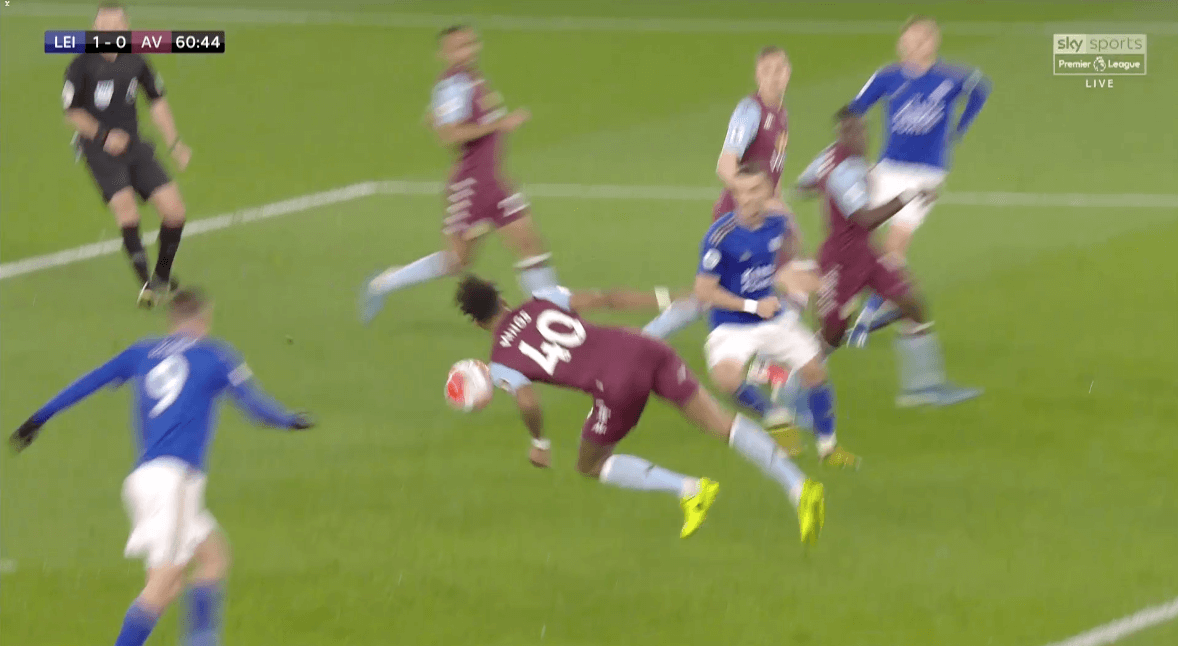 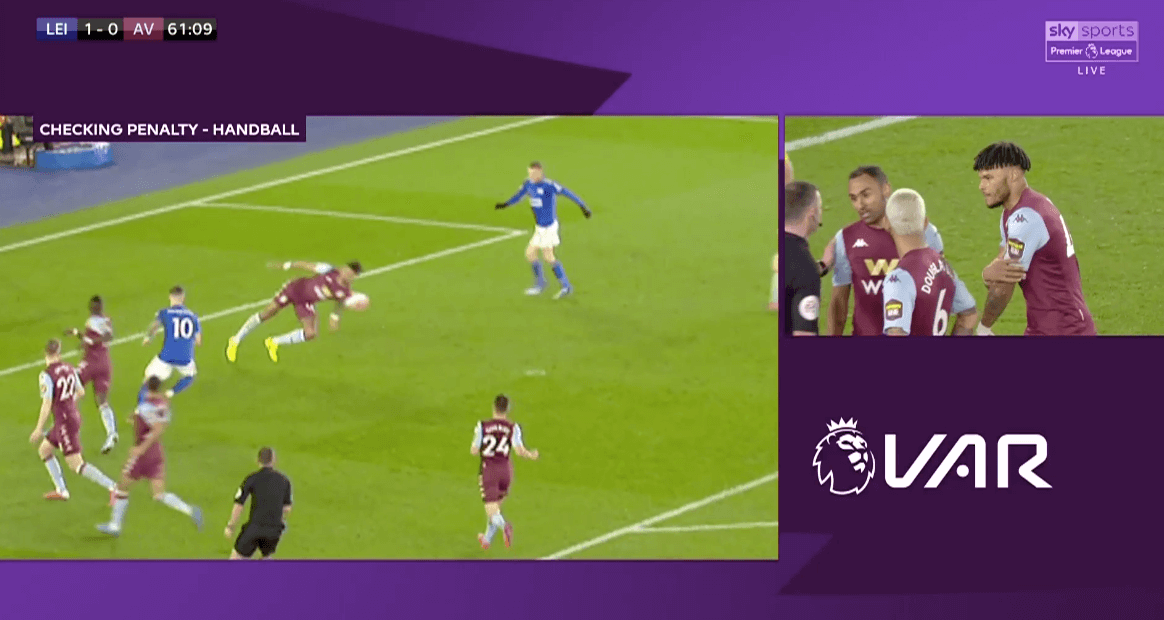 It was then an Arsenal defender, Gabriel, who scored the first “legal” shoulder goal, in their opening league game of the new season that September, away to Fulham. 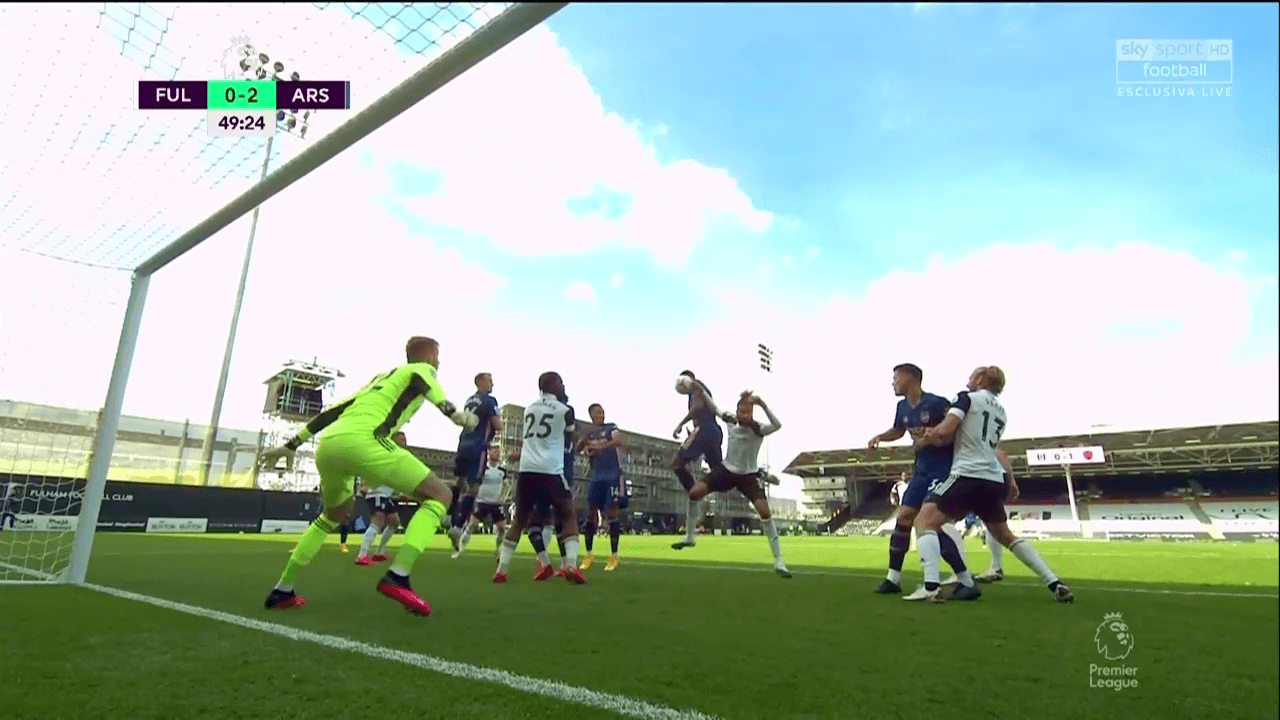 Now, the confusion is over where the shoulder area starts and ends.

Despite commentators declaring it is the sleeve of an imaginary T-shirt, IFAB’s official ruling states: “To determine handball offences, the upper boundary of the arm is in line with the armpit.” In other words, it is only legal to use the part of the arm that cannot make the outline of a player’s body any bigger. 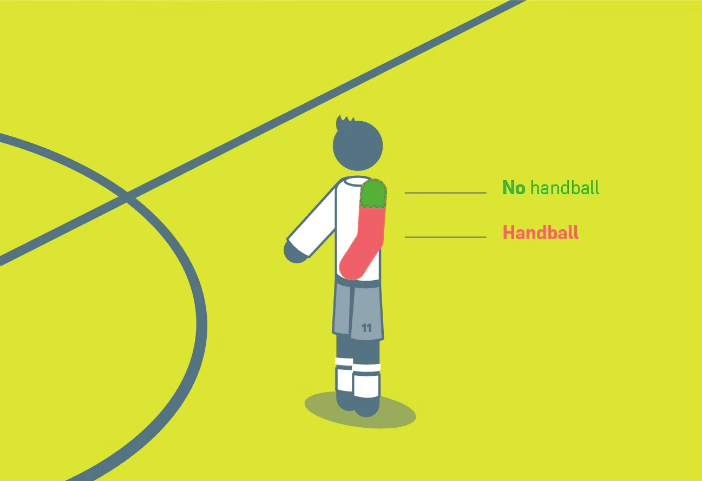 The most significant problem is that it is difficult to conclusively determine armpit level on an outstretched arm, and football players rarely have their arms tied to their sides as they go about their business.

The Premier League crest on one arm of a shirt and a sleeve sponsor’s logo on the other, which should approximately line up with the armpit, help the officials to a degree, but it is far from an exact science.

If we look at Craig Dawson, you can see that a best guess imaginary line from the armpit goes through the sponsor.

But on a marginal decision the ball won’t touch one area or the other – it may well touch both. You can only really guess the exact contact point. pic.twitter.com/LQPJwt8rwe

“You see here — it strikes him on the arm, but it strikes the top of the arm. The argument is, ‘Does it overlap both?’. Well, it’s a subjective decision,” said former Premier League referee Dermot Gallagher, speaking on Sky Sports, in relation to the Dawson goal against Leicester.

Right at the death, Craig Dawson equalises to salvage a point for West Ham!! pic.twitter.com/KRQcoy0tyE

“They showed the silhouette with the red and the green, and it was almost like a polo-shirt sleeve. The difficulty here is, because it hits so far up the arm, you wonder if it overlaps part of the flesh, if you like.

“What I would say, in fairness, is that the on-field decision was ‘goal’, so it was thrown to the VAR, (and) the VAR decided to stick with the referee. So if we hadn’t got VAR, it would still be a goal.”

Football’s shoulder conundrum is made trickier by the size of a football.

A Premier League ball is much bigger than a person’s shoulder area, and there are no rules clarifying how much of a ball needs to touch the arm below the armpit for it to become handball. It is rare that at least some of the ball does not touch an illegal part of an arm when hitting the upper areas of one, leaving little scope for VAR to intervene.

In Dawson’s case, VAR Kavanagh went with the ruling on the field, deciding there was no definitive evidence from the replay to rule out the goal.

Kavanagh was also the VAR for league leaders Manchester City’s 1-0 win over Everton at Goodison Park, where, for the second time in a fortnight, he opted not to overrule the on-field decision when the ball struck the upper arm of Manchester City Midfielder Rodri inside his penalty area.

“It should’ve been a penalty.”

Dermot Gallagher says the referee should’ve been sent to the monitor when Rodri was deemed to commit a handball against Everton #RefWatch pic.twitter.com/Tqzlx9hAoT

Afterwards, struggling Everton’s manager Frank Lampard said, “We’ve lost a point because of a professional who cannot do his job right. It is so incompetent to get it wrong.”

Mike Riley, the head of the professional referees’ body, rang Lampard to apologise a few days later, but his acknowledgment of wrongdoing was little consolation given Everton’s alarming slide towards what would be the club’s first relegation from the top flight since 1951.

Even with the ability to slow down match action to allow for frame-by-frame scrutiny, it is a difficult job for officials to determine handball in this situation, given the lack of clarity in the rulebook.

If only there were an objective, goalline-technology equivalent for determining the bottom of an armpit…