Immediately after the judges announced the 4:1 split decision in favor of 28-year-old Mohammed Hussamuddin at the end of his bout against 2019 Asian silver medalist Kavinder Singh Bisht, there was a show of camaraderie between the boxers. The feather-weight boxers (57kg) are rivals in the ring and friends outside of it.

The boxers were seen having a long conversation before Bisht hugged Hussamuddin.

“We are opponents as well as best friends too. That also means we know the tactics of each other. While Kavinder starts with a flurry of power punches, I have to rely on my counter punches. I also have to rely on variations to surprise him,” Hussamuddin said.

Bisht and Hussamuddin do share tactical notes and if the latter needs additional advice he can always look homeward.

Boxing is in Hussamuddin’s blood. His father Mohammed Samsamuddin is a boxing coach and his brothers Etheshamuddin and Itishmuddin are pugilists and Indian internationals.

The CWG birth has made Hussamuddin determined to win a gold. His hometown Nizamabad in Telangana is still celebrating newly-crowned women’s world champion Nikhat Zareen. Hussamuddin hopes to give them more reason to cheer soon. 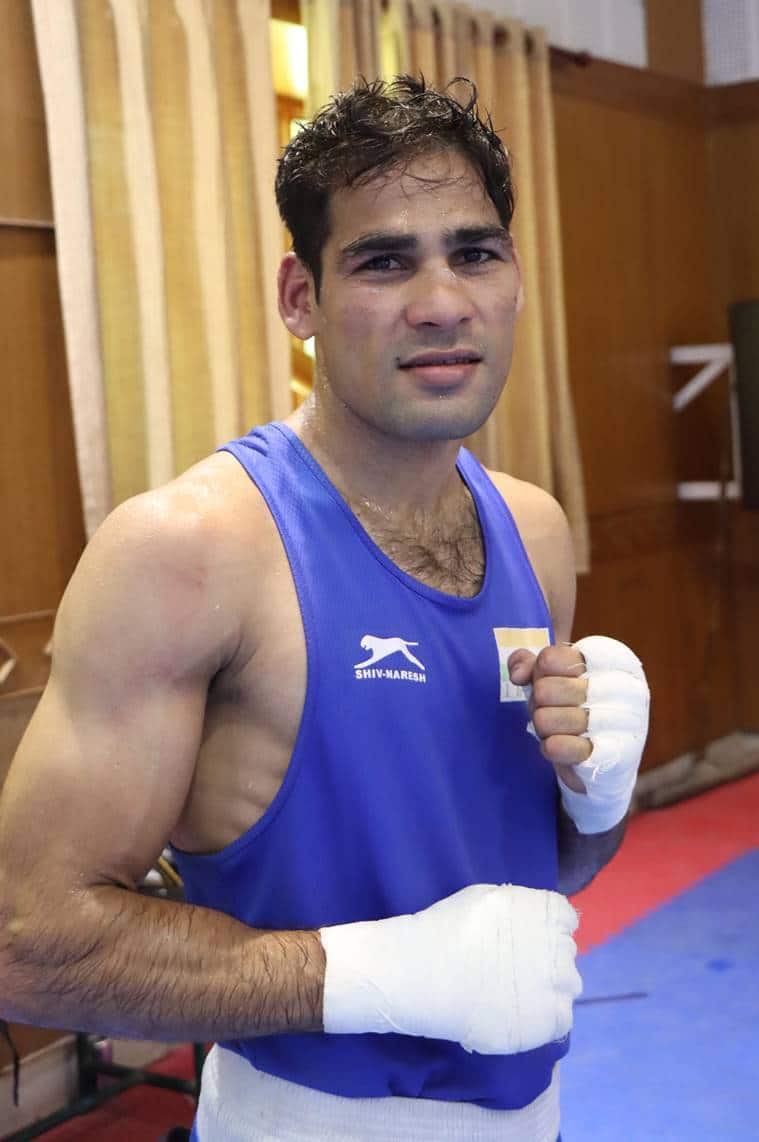 Hussamuddin made sure that he never missed a sparring session against the likes of Shiva Thapa.

“While Nikhat started boxing years after I started, what she has achieved also motivates me. My father has always treated us like any of his trainees. Seeing us win medals brings joy to him and that’s what I will be aiming for in Birmingham,” Hussamuddin said.

Hussamuddin, the second youngest of six brothers, started off as a gymnast. His habit of climbing walls made his father look for a better way for his son to spend his energy. The transfer of the gymnastics coach presented an opportunity to take to another sport and it had to be boxing. Samsamuddin took Hussamuddin under his wings.

A junior national bronze in 2009 followed by a silver medal in the youth nationals at Kakinada showed early promise. “Our father still calls him a gymnast at home because he has not changed his weight category (56-kg to 57 kg) and can maintain his weight,” older brother Etheshamuddin, who was at the trials, said.

While 2015 world championship bronze medalist Shiva Thapa would rule the bantam-weight (57kg) category, Hussamuddin did take big strides. A bronze in world military games in 2015 was his first senior international medal. He would win his first senior national title in 2016 followed by a silver in Strandja Memorial in 2017 and a bronze in the next edition. The medals at international competitions would see him being selected for the 2018 CWG and Asian Games. He would win a bronze in Gold Coast, where he lost to Peter McGrail of England in the semi-finals.

“Even though he would not get his chances at the international level initially, Hussamuddin made sure that he never missed a sparring session against the likes of Shiva Thapa. His main strength has been to slip to the side and throw combinations of punches as a counter and it was the same even today. Early in his career, he used to be very offensive in the first round but would lose steam in the next two rounds. But with time, he has learned how to control the bout. Even though he lacks height, his strength has been his swift movement,” chief coach Narendra Rana said. Hussamuddin hopes to give them more reason to cheer soon.

In 2019, Hussamuddin would win his second senior national crown at Baddi with a win over former world youth champion Sachin Siwach in the final followed by a bronze in the Cologne World Cup in 2020.

But a back injury during his loss against 2018 CWG flyweight champion Gaurav Solanki in the Tokyo Olympic qualifier trial kept the boxer away from boxing for more than four months. He made a comeback with a quarter-final appearance in last year’s Asian Championships, where he lost to world champion Mirazizbek Mirzahalilov of Uzbekistan before winning the silver at Boxam International in Spain.

“When I came to the national camp for the first time, I remember meeting Akhil (Kumar) bhai. He has been one of India’s best bantam-weight boxers and that’s what I aspired for. Whenever I did not get chances or suffered an injury, I would watch videos of Vasily Lomachenko and Floyd Mayweather. I did not want my mind to think about missing chances or injury,” Hussamuddin said.

Now fit and raring to go, Hussamuddin wants to shine on the CWG stage. He has the belief and the boxing pedigree to do so.