A woman who was once so overweight she booked herself two plane seats on a flight, has shed an incredible 19 stone.

Haleigh Kavanagh, 25, a beautician from County Tipperary, weighed 32st at her heaviest and was so ‘scared’ she wouldn’t fit into a singular plane seat that she booked herself two seats when going on holiday instead.

She wore size 28 clothes and when going on holiday to Portugal with friends and felt ‘mortified’ after hearing horror stories of overweight people being marched to the back of the plane after not being able to fit into the seats.

Haleigh Kavanagh, 25, a beautician from County Tipperary looks glamourous in a blue corset dress and strappy heels after losing 19st. She goes to the gym and started doing cardio at home after her gastric bypass 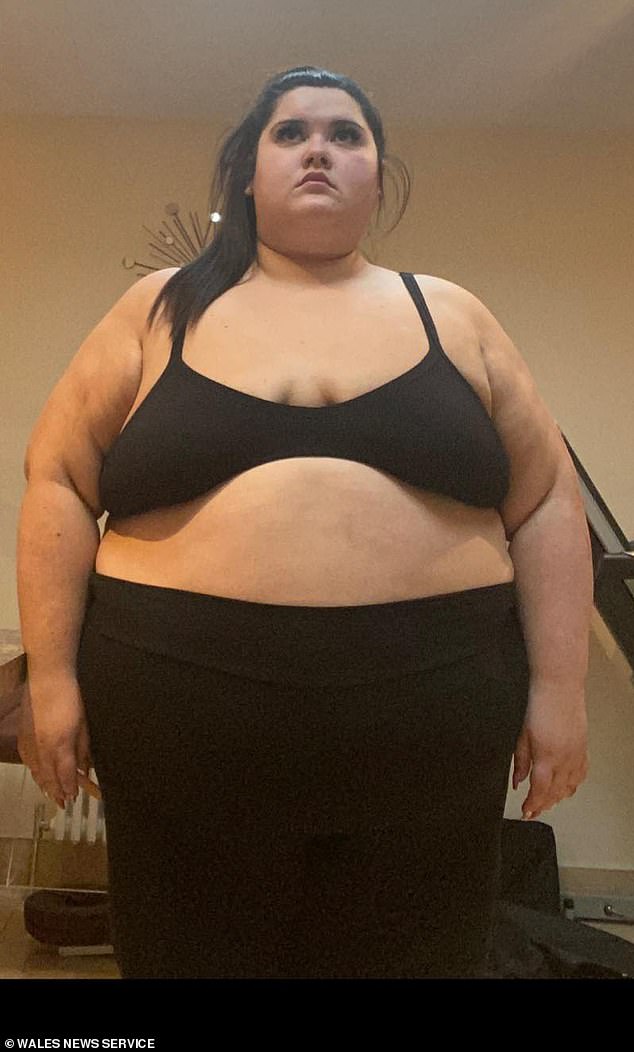 Haleigh, 25 once weighed 32st and worse size 28 clothes at her heaviest. She was so ashamed of having to book two seats on a flight she decided to finally lose weight

The 25-year-old’s stunning transformation has seen her shed a whopping 19th after having a gastric band costing £4,500 in Lithuania

To save herself the same embarrassment, and not to ‘inconvenience anyone’ the 25-year-old paid double to fly.

The flight was a wake up call for Haleigh, who is now flying high after shedding more than half her body weight. after shelling out £4,500 in Lithuania for gastric bypass surgery and taking up exercise.

After the surgery, her stomach was so small she says she now eats the same amount as a baby.

Haleigh recalled: ‘I was going to Portugal with friends on holiday and someone told me a horror story of a man who’d been so big he had been marched out of his seat to the back of the plane.

‘I was so terrified of that happening to me that I bought a second seat, so I wouldn’t be impacting anyone.

Haleigh said: ‘People think having a gastric bypass is an easy way to lose weight. But it’s not. It’s hard work and you still have to eat the right food to lose weight. These days for a treat I will have a Calippo ice lolly.’ 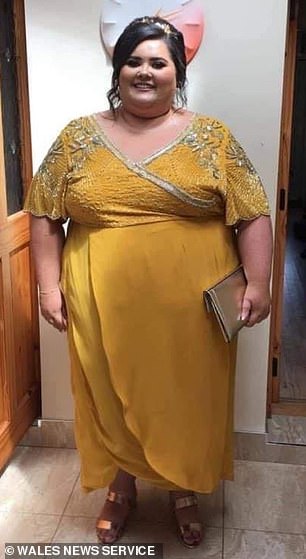 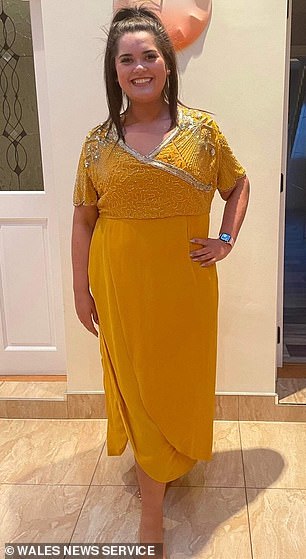 Haleigh at 32st , wearing a yellow dress on a night out (left). Hayleigh wearing the same dress after weight loss – it now hangs off her (right)

‘I remember sitting there on the plane and thinking, “I am never doing this again”.’

The beautician said her weight rose due to her bad diet and lack of exercise – and she pledged to put it right after her holiday horror.

She said: ‘I’d eat share bags of crisps, doorsteps of white bread with honey and butter and wolf down bars of Cadbury’s chocolates.

‘I didn’t do any exercise either. Everything I did was difficult. I felt constantly exhausted and walking and going up flights of stairs was a mammoth task.’

Haleigh wanted a gastric bypass to help her with her weight battle – but had to lose 3st before doctors would let her go under the knife.

After her holiday horror Haleigh set to work at losing the three stone required to qualify for gastric band surgery, drinking mainly a liquid diet

After going to Portugal Haleigh ditched her former diet of takeaways, bread, and chocolate and went ahead with the £4,500 surgery. 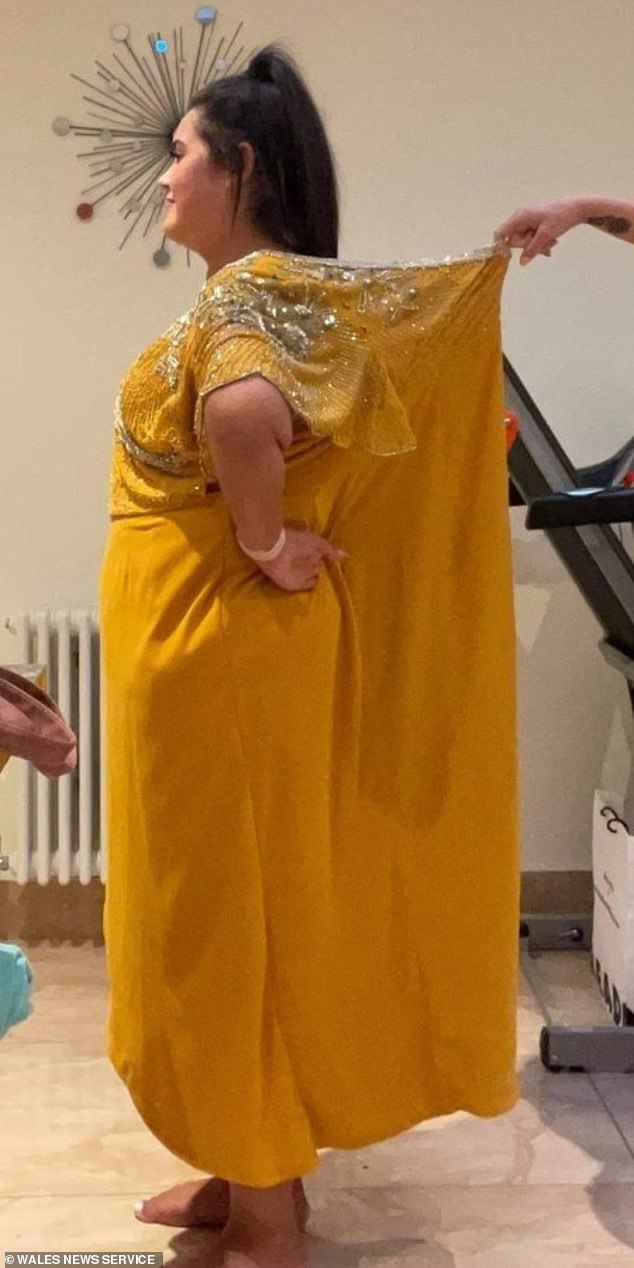 The beautician’s old clothes now hang off her body like tents, as demonstrated in this image

She ditched her former diet of takeaways, bread, and chocolate and went ahead with the £4,500 surgery.

She said: ‘I had to lose three stones before they would do the operation because of the health risks involved.

‘I primarily drank a liquid diet but I felt so determined at this point.’

The operation shrank her stomach and meant she could only consume minimal amounts of food – such as protein drinks, cups of soup and baby food and saw her weight plummet.

After recovering from surgery Haleigh started exercising doing cardio at home before later joining a gym and adding weight training.

She said: ‘My stomach is now so small and I can now probably eat the same amount as a human baby. 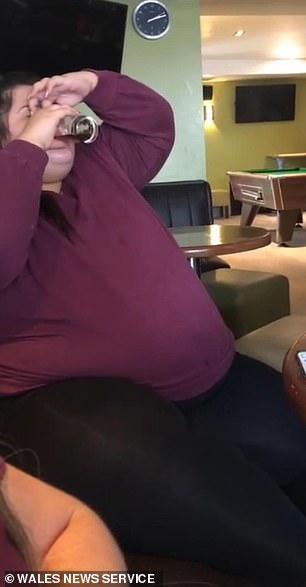 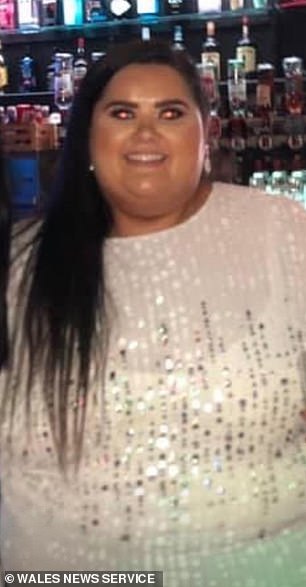 Haleigh chugging down a liquid diet in a bid to lose enough weight for surgery, holding her nose so she couldn’t taste it

‘People think having a gastric bypass is an easy way to lose weight. But it’s not. It’s hard work and you still have to eat the right food to lose weight. These days for a treat I will have a Calippo ice lolly.

‘I exercise five to six days a week and I am disciplined about what I eat.

‘I generally can’t eat and drink at the same time because my stomach is so small. I have to make sure I get all my vitamins and I have vitamin B12 every three months.

‘I don’t deprive myself of things I love – if I fancy some chocolate I will have some. But now I will eat eight squares rather than a family share bar to myself!’

Just 22 months after the surgery, 5ft 7ins, Haleigh, of Tipperary, Ireland, weighed 13st 2lbs and has shrunk to a size 12.

She said: ‘Surgery is hard, every day is hard, but being fat is so much harder,’ she says. ‘The operation is a lot of money but for me it was worth every penny.

‘I love going for walks and out on adventures now. Exercise is so important..’

‘Now I love going out on adventures – I really am living my best life.’

She hopes to undergo further surgery in the future to remove her excess skin.