Wrestling with the future of rugby in Mongolia

What do you know about sumo?

When future Brave Blossoms captain Michael Leitch first arrived in Japan as a 15-year-old, he thought he had a general idea. But then he started clocking who was winning top tournaments and the seedling of an idea lodged in his brain. Today, he is taking action.

He tells Rugby World: “When I first came over here, I realized that all the top sumo wrestlers in Japan were actually Mongolian. And I thought that was fascinating.

“They could all speak perfect Japanese. So I looked into the background story and a lot of them were scouted in childhood – like 15 or 16 – and were taken into what you’d call a sumo camp or stable. They just trained and trained and became these top sumo wrestlers.

“And these guys are massive, you know. They’re huge guys. So I thought, if you could get one of these guys to play rugby, that’d be awesome. In the front row, like a tighthead. Because you don’t need to have the flair or anything like that, they just need to be big and strong.

“So going to Mongolia, I thought there should be a heap of Mongolian kids over there that have that potential to play in the front row.”

Yes, Leitch headed to Mongolia. And in 2019, a young man headed back the other way.

Thanks to a plan Leitch cooked up with Austin Gansukh of the Mongolian rugby union, they appealed for talent via social and media campaigns, as well as courting the views of youth and school coaches, before running a process of scouting and screening sessions.

After whittling down the numbers they finally identified young Norovsambuu ‘Norvoo’ Davaajav as the right player to come over to Japan for placement in a school program.

We’ll focus more on that scheme in a second but it’s first worth explaining whether Leitch’s initial observations are correct.

“Mongolians utterly dominated sumo between 2006 and 2016,” says John Gunning, a sumo writer and commentator based in Japan. “In that span there were 59 tournaments and 57 were won by Mongolians – plus one each by an Estonian and a Bulgarian.

“In the past six years there have been some Japanese winners but Mongolians have still held sway for the most part.

“And many of the guys that came over to sumo are physically imposing. In the attached photo I’m in the middle. I weighed 120kg in that photo and I look like a child.” 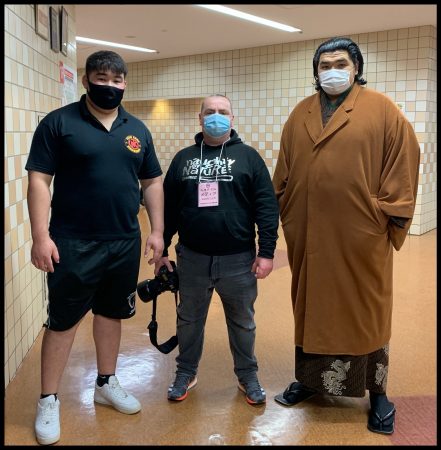 You begin to understand the appeal. Of course, just because you’re panning for gold, don’t throw away a diamond.

Young Davaajav is not a prop, but a lock. Leitch jokes that he tried to fatten the fella up, but he just doesn’t have the genes for it. But Norvoo is tough, don’t you doubt that. A lover of breakdown skirmishes and defensive collisions, he is raw and has a long way to go with his ball work, but the passion is infectious.

Leitch has also talked of diving deeper into Mongolia when his playing days are done. Asked if there is any other element to his drive here, he replies: “I want to replicate when I first came over here as a kid as well.

“Every opportunity was given to me in Japan, by the kindness of my head coach and everyone who supported me throughout my younger years. But not getting someone from, say, Samoa, Tonga, Fiji or New Zealand, but getting someone over who has no rugby experience. He has an opportunity to change his life and the course of his future.

“And keeping it in the region is massive. If you’re an Asian kid who plays rugby, your first target is to be a professional player in Japan. We have three leagues. Your quickest route is going through Japan. And so I wanted to hopefully kick-start that with this Mongolian kid. He’s going to university next year, and hopefully that progresses into a professional contract somewhere here.” 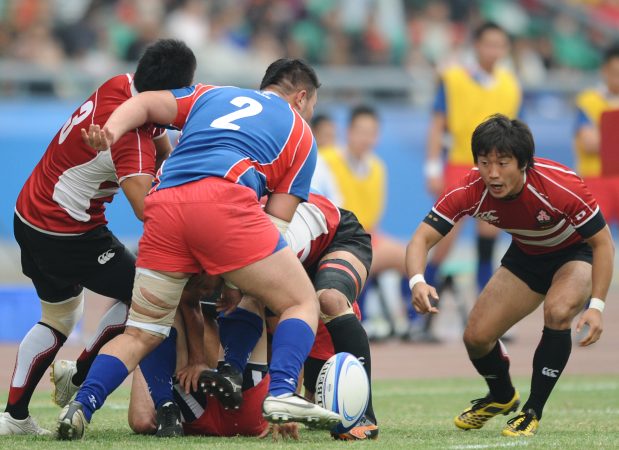 Leitch talks of not wanting to force Davaajav into a rugby career, but rather give him an array of options for his life he would not otherwise get. Big picture, Leitch dreams of tapping into talent all over the region too. He talks of having a team in Japan Rugby League One, heavily populated with talent from East Asia, Sri Lanka, India and beyond.

In his younger days, Leitch would compete in the Asian Five Nations (now the Asia Rugby Championship), and although Japan would run up big numbers against their rivals, he loved seeing the passion from sides like Kazakhstan, Sri Lanka, South Korea, Thailand , Dubai.

There’s something missing there now, with these sides never getting to meet top-tier nations today. He has seen Japan grow the more major Tests they get, and he wants to pay some of that back into Asia – even if it means finding a handful of opportunities for promising kids. At least at first. There is talk of the project with Davaajav being used as proof of concept, to help open the door for more players.

The landscape for rugby in Mongolia

With Mongolia specifically, though, there is a unique cultural heritage there, as well as some fascinating ethnogeography to contend with.

“Our landscape is big, but our population is only 3.4 million,” explains Austin Gansukh, senior vice president of the union. Today based in the capital region of Ulaanbaatar, Gansukh was first introduced to the game when his brother-in-law James Wood – a Canada-born Hong Kong international – came to visit Mongolia right at the start of the 2000s. He brought an odd-shaped ball with him.

A wrestler and basketball player, he was drawn in by the contact, but there was so much more to the game and he’s been hooked ever since. He even opted to study in Cardiff, to tear into rugby more.

Gansukh continuously calls rugby a developmental sport in Mongolia. But before he gives us more on the path ahead, we should probably have more on the uniqueness of the nation. 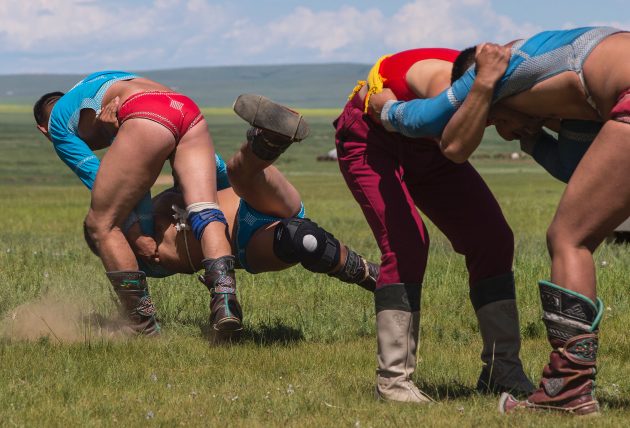 “Then there’s geographically. The western part of Mongolia is quite high, with a lot of hills and high mountains, lots of trees and things like that. Whereas in the south, we have the Gobi region. It’s a desert. So the lifestyle and the density of the populations are very, very different.

“In the north we have a very big lake. It’s more sort of sacred land where mining projects are not allowed, for example. Then in the east, it’s steppe land. We even have small accent differences all over. Then in the west we also have a minority population of Kazakhs. So it’s quite diversified. And when you put them all together, representing a national team, you have a very diversified team today.

“Each region produces different styles of wrestlers too, even in our national wrestling competition. So we have a lot of champions from the far western part of Mongolia and so on.”

Talking about styles of fighters, Gunning gives us the sumo view, saying: “Most still grow up in much harsher environments than Japanese kids. Tough, hardscrabble outdoor living that is similar to the burly young farmhands and manual workers that dominate in gridiron football in Oklahoma and Texas.

“Coming to Japan at a young age and with the pressure of needing to provide financially for family back home in many cases means there is much more at stake and so they train harder and fight more desperately than many Japanese kids who don’t have the The same threat of shame that failure would bring.”

With Norvoo Davaajav, Leitch shares a video of the kid’s journey and also fills us in on the young man’s own modest upbringing. Of a father with hands that tell tales of graft as a cattle herder, a mother who now cleans hotels, and a family of around seven who found peace in a traditional yurt. The young man has not seen his family for the duration of the Covid crisis.

Is battle in the blood? The role of history has not even occurred to us, but it’s something Gunning touches on when discussing the mentality of Mongolian rikishi (sumo wrestlers). Gansukh adds: “It’s right to say that we have a mentality from hundreds of years ago, with Genghis Khan and so on. He basically brought all the different tribes together and that made the difference, because the tribes used to fight each other all the time.

“We are a very proud nation about what we’ve achieved historically, so that’s why we carry that certain pride about how our ancestors used to dominate. That still carries some weight.”

What is helping carry rugby’s weight today in the country, though, is that it has been adopted by the army, with sevens. There is high school and uni rugby but fortuitously, Gansukh explains, the union pitched to the defense ministry and won them over with the sport’s story. There was a rugby championship in 2020 and in September the army will again put on a show.

Mongolia are a full member of World Rugby, as of last year. Their 15s side have a Test in July, against Uzbekistan, and if they win that they will face the winner of a showdown between Kazakhstan and Kyrgyzstan.

Gansukh says to expect a direct, physical game up front, with the hope that sevens-sharpened backs can capitalise.

As for the future, he says the aim is pretty simple: “We want to attract more foreign support.

“Our ideal path is to get the likes of Japanese professional teams to start looking at Mongolian rugby players. Because we have definitely got some really, really good talents, raw talents. If we can give some an opportunity to play in a professional league, even in the Japanese division three, they could make a really good, successful career out of that.

“Right now actually, we are in talks with a Japanese side about having a school exchange program where we actually get some of our high school teams to travel to Japan, get shared experience of rugby and so on. So it’ll be cultural exchanges, as well as sporting experience. I think there are huge opportunities and that doesn’t stop with men’s rugby. We have a huge potential with our girls as well. 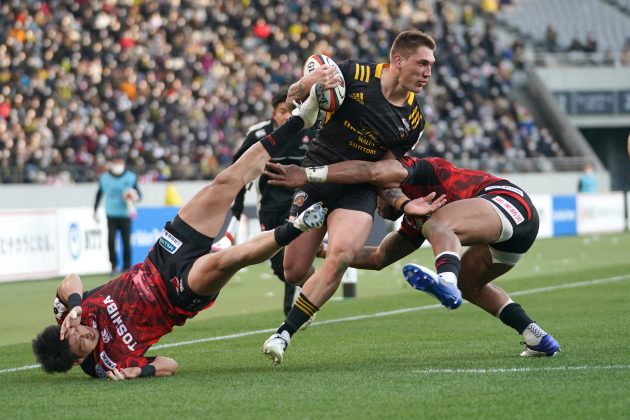 “Then from a local point of view, we just want to promote rugby more and get more people to participate in rugby.”

They are competing with individual combat sports for attention. Women’s 3×3 basketball has been a recent sensation in the run up to the last Olympics. But Gansukh believes the days of confusing rugby with American Football are over.

The last three Rugby World Cups were shown on Mongolian television and, Gansukh tells us, the sitting president of the Mongolian National Olympic Committee was actually at the last World Cup final in Japan.

There is progress happening, we are told, incrementally.

As for Leitch, right now he is loving his interactions with a “codehead” kid. As he tells us: “He makes me want to play more. I was thinking about retirement and now, just watching him progress, that’s awesome to see.

“Some players come over here, spent eight years and can’t speak a word of Japanese or they’re terrible. He’s been here two years now and he is texting me in Japanese. It’s amazing.”

The future of rugby in Mongolia is something to wrestle with. But there are combatants determined to create opportunities for players.

Download the digital edition of Rugby World straight to your tablet or subscribe to the print edition to get the magazine delivered to your door.